The MINI Cooper SE has a 181 hp (135kW) electric motor that makes 199 lb-ft of torque and is the same motor used in the BMW i3. The MINI Cooper SE, however, is a typical MINI and front wheel drive versus the BMW i3 which is rear-wheel drive. The electric engine is tucked neatly under the front bonnet. 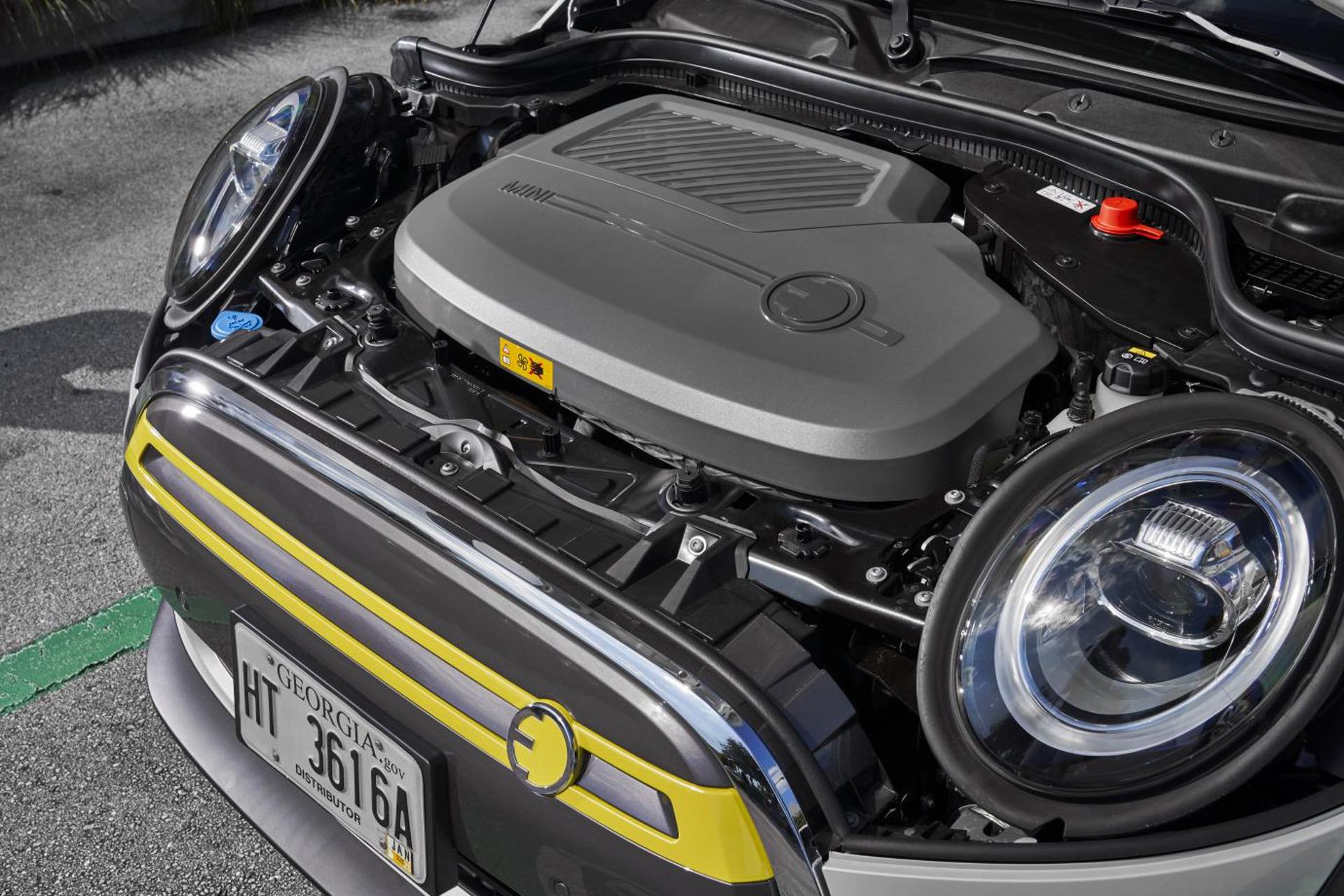 MINI’s battery technology is also inherited from the i3, but instead of the latest 120Ah pack, the Cooper SE gets by with a 94Ah modified in a T-shape to fit the car’s layout. Therefore, the MINI Cooper SE has battery pack of 32.6 kWh and 28.9 kWh net.

We asked the MINI engineers whether a larger battery pack will come in the future, but no answer was provided at the moment. We believe that the MINI Cooper SE will follow a similar strategy as the i3, with incremental battery pack upgrades, which will further increase the electric range.

The official EPA rating puts the MINI Cooper SE at 110 miles while the latest BMW i3 at 153 miles. With the caveat that the i3’s range is best case scenario and driving in the super efficient ECO PRO+ mode.

How To Charge The MINI COOPER SE 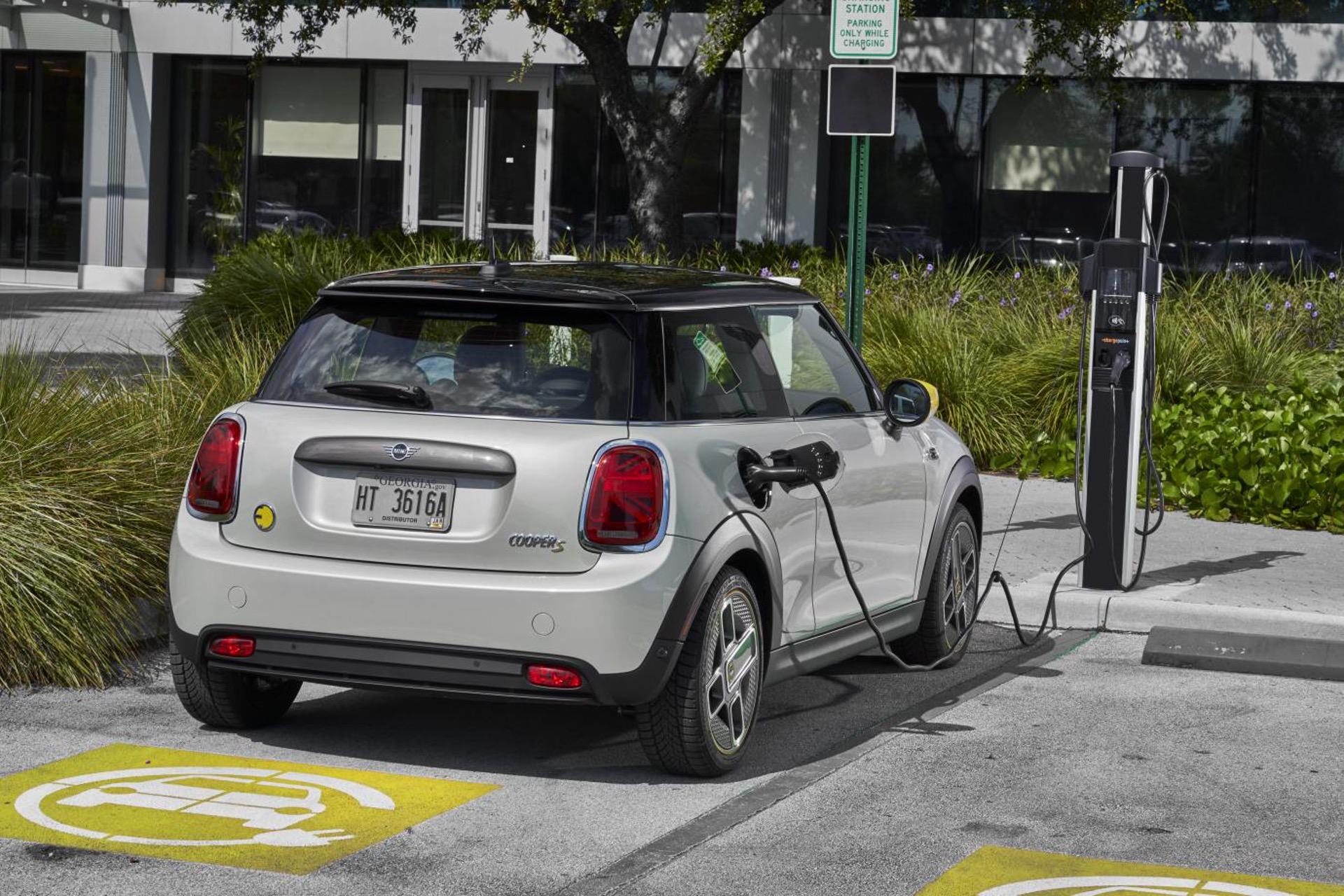 As far as charging goes, the MINI Cooper SE has a J1772 plug-in charge port which can deliver up to 11 kW Level 2, as well as a CCS DC port with charging at speeds of up to 50 kW.

On the DC Charger, the MINI Cooper SE is capable of going from nearly empty to 80 percent in about 35 minutes. It takes 1.4 hours to a full 100 percent state.

If you only have access to a regular home plug, then charging to 100 percent will take around 24 hours.

How Does The MINI COOPE SE Drive 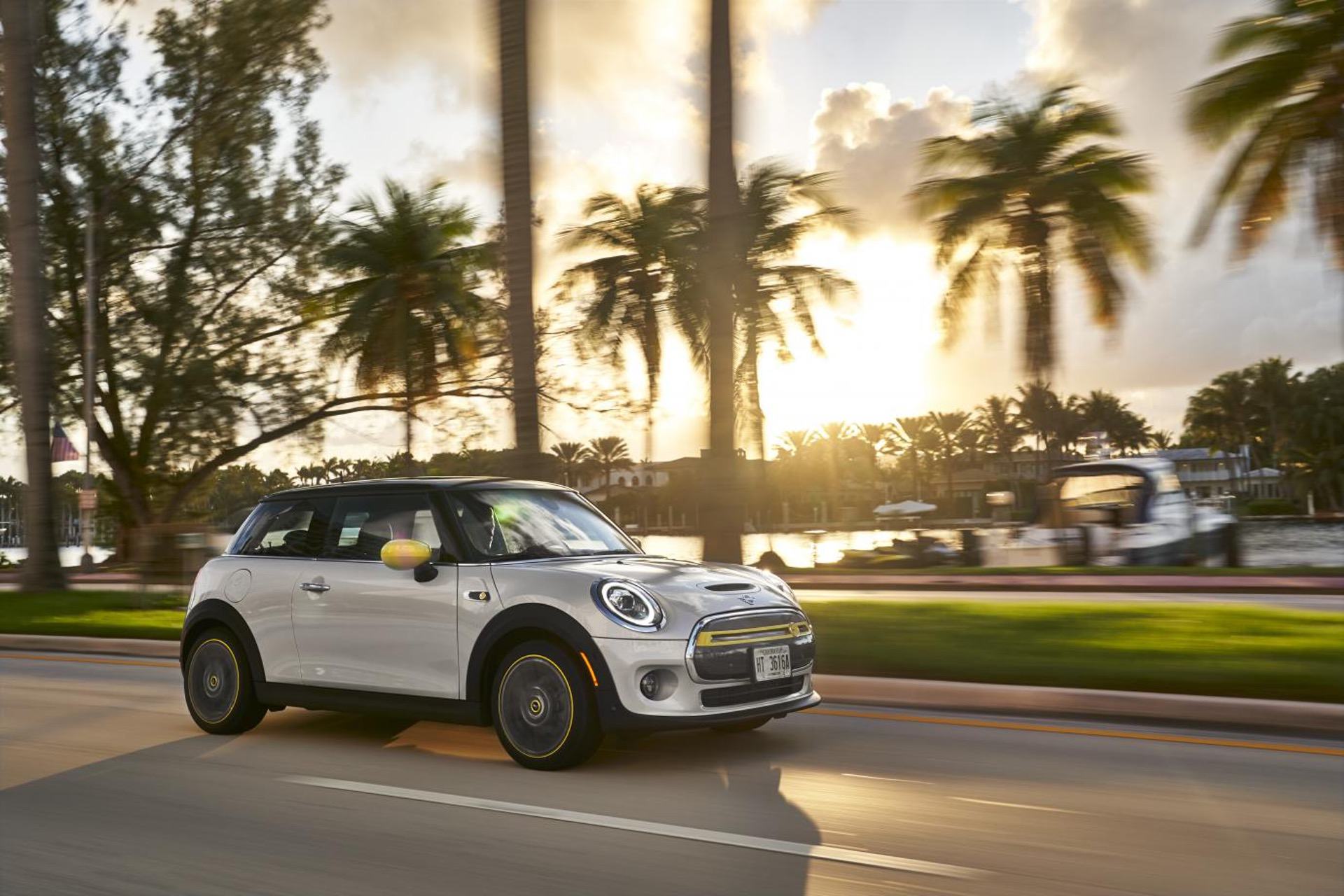 With its funky, cool and hipsterish design, it was only natural that the MINI Cooper SE will head down south to Miami for the first press drives. Naturally, the starting point of my journey was set at the Institute of Contemporary Art. The end destination was the nearby City of Fort Lauderdale.

This part of the trip would take place alongside Ocean Drive, a picturesque drive that fits the MINI’s funky character. The electric hatchback starts off in the Mid drive mode which aims to bring the right balance of steering and pedal input, and range efficiency.

It is quite clear from the beginning that the MINI Cooper SE is different than the rear-wheel driven BMW i3. Its nose is loaded and stiff, and thankfully, the go-kart characteristics of a MINI are still there. In fact, that’s exactly what the MINI engineering team was hoping to achieve with the Cooper SE.

According to them, a MINI customer wouldn’t want to trade the go-kart feel of a conventional MINI for an electric drivetrain, so keeping the same driving properties was of the utmost importance.

Thanks to its 50-50 weight balance (aided by the battery pack in the floor) and to a 30 mm lower center of gravity than the standard car, the Cooper SE delivers some impressive sprints while the punchy electric drivetrain makes the Cooper SE a proper riot to drive. More importantly, the 0 to 37 mph (60 km/h) sprint comes in 3.9 seconds which is quite useful in city driving.

If you switch over to the Sport driving mode, the steering and the “gas” pedal turn sharper, but there is no suspension adjustment. Yet, the MINI Cooper SE becomes more agile, the steering wheel is a bit heavier and there is a lot more feedback from the road.

The understeer feeling from the regular MINI Coopers is still there, but you can now control that behavior by simply lifting the foot of the throttle. In a conventional MINI, releasing the gas pedal will naturally reduce the power input, but in the case of the Cooper SE, that action will also trigger the regenerative braking system.

There are 2 level of regeneration offered in the MINI Cooper SE – one is more efficiency oriented with a higher level of regen that engages early on throttle lift, the other allows more coasting on lift which is less intrusive during more spirited driving. There is no setting where regeneration is switched off. Regeneration always occurs during braking as well.

With the 2 regeneration modes, the driver can select the preferred degree of regen based on their preferences. The Low setting is less intrusive and it’s easier on the driver and passengers. It’s also less aggressive than in the BMW i3. The High setting, as you’d expect, is a bit more hardcore and provides the most regen capabilities. When compared to the i3, it’s more aggressive. The two modes provide 0.19g (like i3) and 0.10g.

Technically true coasting is not possible with the two modes. You can coast if shifting to neutral, as in any other car, but not with pedal position.

According to MINI, they have taken this approach to allow flexibility of a more performance oriented driving experience with the option to adjust the level of coast/regen.

I’ve been driving a BMW i3 for the last six years, so I’m a true EV fan, therefore, there is only option for me: the High Regen mode. My goal has always been to squeeze the best driving range out of my electric car and high regen braking helps achieve that goal.

Coming from the i3, it didn’t take me long to get the timing right and that’s one of the fun parts of driving an EV. If you drive mostly in the city, the regen opportunities are everywhere and you’ll enjoy seeing that EV range increasing without charging the car.

The initial route was pre-programmed in the nav with a 36 mile drive, but with several detours, the odometer showed 45 miles to the first stop. Even with a combination of spirited driving and cruising, the digital display still showed around 65 percent left on the battery pack.

The trip back to Miami was only 30 miles long and it involved only highway driving. This presented me with the opportunity to test the MINI Cooper SE near its top speeds. While overtaking other cars, I was immediately impressed by the hard acceleration coming from under the hood. The car simply pushes you back in the seat making me wonder what it will be like to autocross the car.

Exiting ramps at high speeds? No problem! The MINI Cooper SE has plenty of grip to keep the front-end pointed in the right direction while modulating the speed and trajectory by simply releasing the “gas” pedal. Of course, the Sport mode and the higher freeway speed will chew faster through the battery power reserves, but at least you’ll have a smile on your face.

After this quick stint, the MINI’s EPA-estimated range of 110 miles seems realistic. At the end of the trip, the odometer showed a total of 75 miles travelled with an estimated 30 miles left. If you drive mostly in the Mid setting, you should easily get the full 110 miles, or even more.

That range might not sound like a lot of EV driving in today’s world, but it will accommodate well over 90 percent of most customer’s daily driving needs. 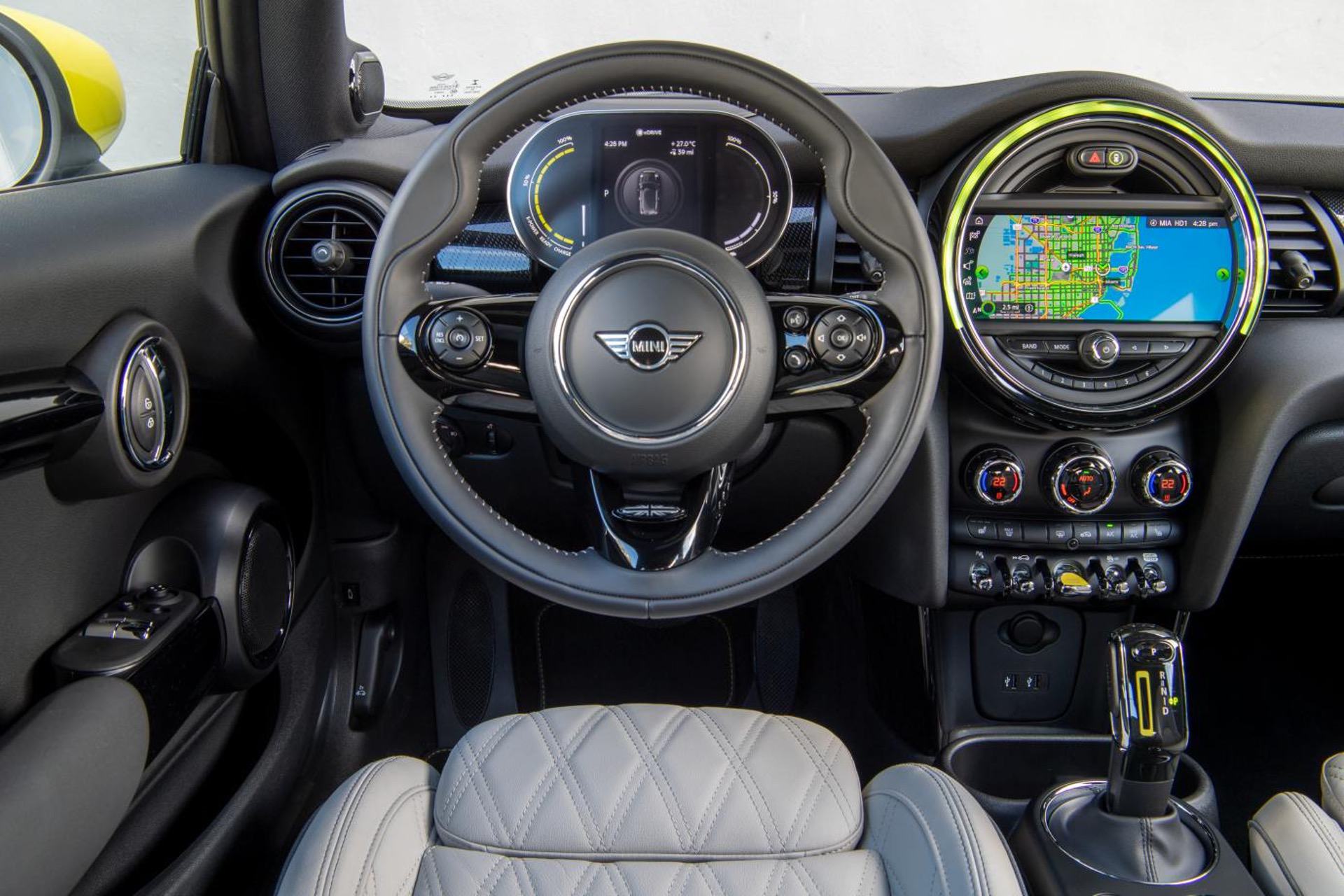 Is The MINI COOPER SE For Me?

For many customers, the Coopers are their second or third car, and now they have an affordable option to replace their gasoline or diesel MINI with an eco-friendly hatch.  Over six years, the MINI Cooper SE will save the average driver $4,450 in fuel costs.

So if you pair the attractive price with the superb driving characteristics of a MINI Cooper, the new British electric car is a quite compelling product.