The 2021 BMW X3 xDrive30e is the Bavarians’ first plug-in hybrid for the X3 lineup. It has a nicely packaged battery just in front of the rear axle that adds 17-18 miles of pure electric driving at speeds up to 83 mph. The BMW X3 30e has a base MSRP of $49,600 which is $4,600 more than the gasoline-powered BMW X3 30i version. Of course, the extra cost is more than offset by the $5,836 federal tax rebate and added efficiency. Though you might think you should buy the X3 30e just for the plug-in hybrid’s fuel savings, I’d argue you might like the way it drives better than the X3 30i. I really like the way there is zero, and I mean zero turbo lag in the X3 30e. Electric motors are instantaneous.

BMW has a long history of plug-in hybrids 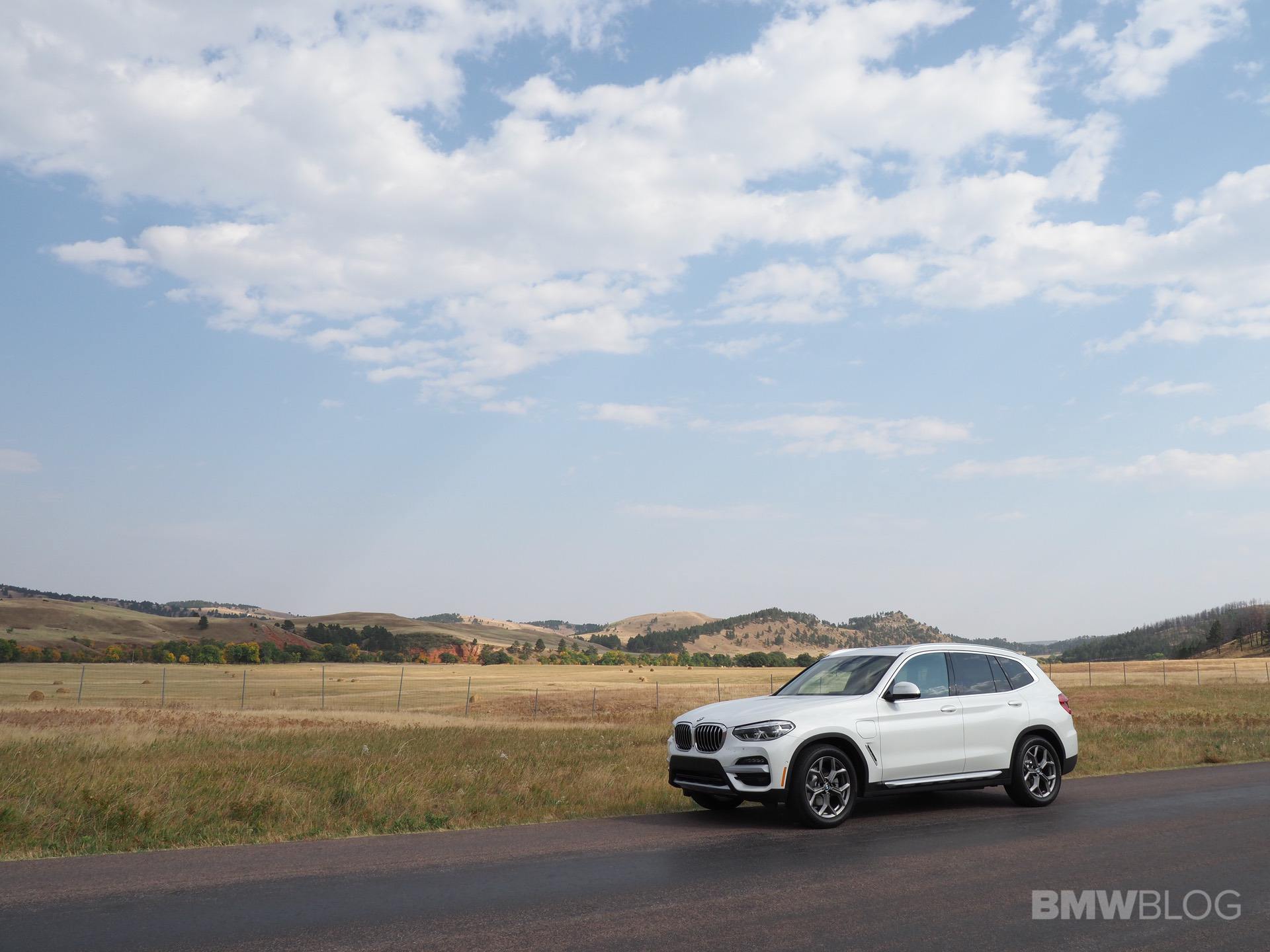 BMW has been making hybrids now for more than 10 years. The benefit of this is obvious in how seamless the transitions are from electric motor only, the petrol motor only, or a combination of both. In fact, when I tried to see how far I could go all-electric in a day in Minneapolis, I was surprised to see the car had snuck the motor on for 1.5 miles in a day where I managed 53 pure Electric Miles probably when I was merging on the highways. I don’t know because I didn’t hear the engine kick on or the shudder from an engine start.

The 2021 BMW X3 xDrive30e has three eDrive driving modes to select from. If you just jump in and drive, the X3 30e will automatically default to AutoE Drive. This is where the BMW watches your driving style and uses the navigation to anticipate the location you are in. Typically it will use the electric-only driving when moving in and out of the garage, low-speed city driving or once you are up to speed on the highway. It will generally draw down the battery in this mode to maximize your fuel economy. Keeping your battery charged up when you can help with your mileage, but you can drive on just gasoline if you are unable to charge.

Max E-Drive. You can drive up to about 17 miles pure eclectic motor only. This is powered by a 12 kWh, 34aH battery though only 9 kWh is useable per BMW. The electric motor has 107 hp/77 lb-ft so it’s really meant for efficient style driving. If you have found yourself unwisely pulling out in front of a car on a highway in this mode, no worries. A full smash of the throttle, you will feel a detent on the floor, and the car will override the eclectic only mode and kick on the gas engine to allow full acceleration to get you out of trouble. I use Max E-Drive mode extensively when city driving and use it so much my MPG is rated over 90 mpg. This does require frequent plugging in though if you are going to go over 20 miles of electric driving in a day. If you are still driving after running the battery down the car will engage AutoE Drive.

Battery Control. This third eDrive mode of driving will allow the driver to set the amount of energy you want or need to maintain in the battery. This is especially useful for those who live in major cities where there are major fees waived if you can drive pure electric in zero emission zones. In certain European countries, if you set the destination in major cities, this happens automatically. I left ours set at 70% though rarely used this mode.

Pedestrian Warning System Tone is wild. It almost sounds like a sound from a Sci-Fi Movie. The tone functions at speeds below 20mph and is useful to pedestrians and pure electric driving mode makes zero noise on its own. I hear it best in concrete parking garages and captured it well in our video review if you want to hear it.

No major design changes from the “regular” X3 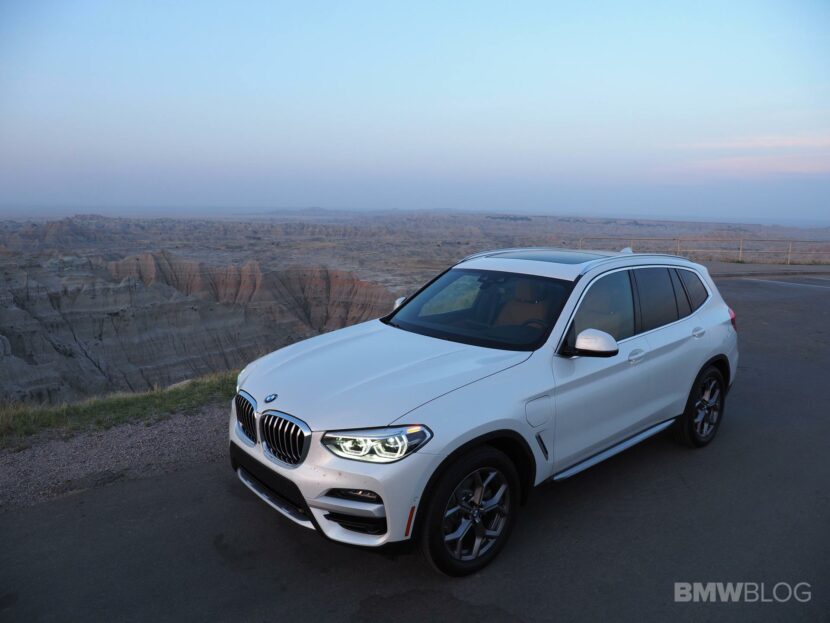 Cosmetically the BMW X3 plug-in hybrid is virtually indistinguishable from the non-hybrid versions. The easiest way to spot it is the charging flap on the front fender on the driver’s side. The biggest changes are noticed from the driver’s seat with different dash displays for all the hybrid modes. BMW does add 440 lbs and downsize the fuel tank from 17.2 to 13.2 gallons to make room for the hybrid hardware and battery. The combined power output of the electric and gasoline motor combine for a total output of 288 hp/310 lb-ft torque and 0-60 comes in 5.9 seconds.

Having just returned from a 2,000-mile road trip to Mount Rushmore South Dakota, and now back in city driving solely Max-E Drive, pure electric, I realize that the X3 plug-in hybrid is really two cars in one. You need to go on a massive road trip. No problem, you use gasoline and in our case, we averaged a very respectable 33 mpg. This was purely on gas as plug-in stations were rare in South Dakota. Search them on nav and curiously Tesla SuperChargers were found more frequently than J1772 plugs. Now that we are back in the city, I haven’t used the gas motor at all as we can fully charge at home and there are over 1,000 charging stations in my hometown. 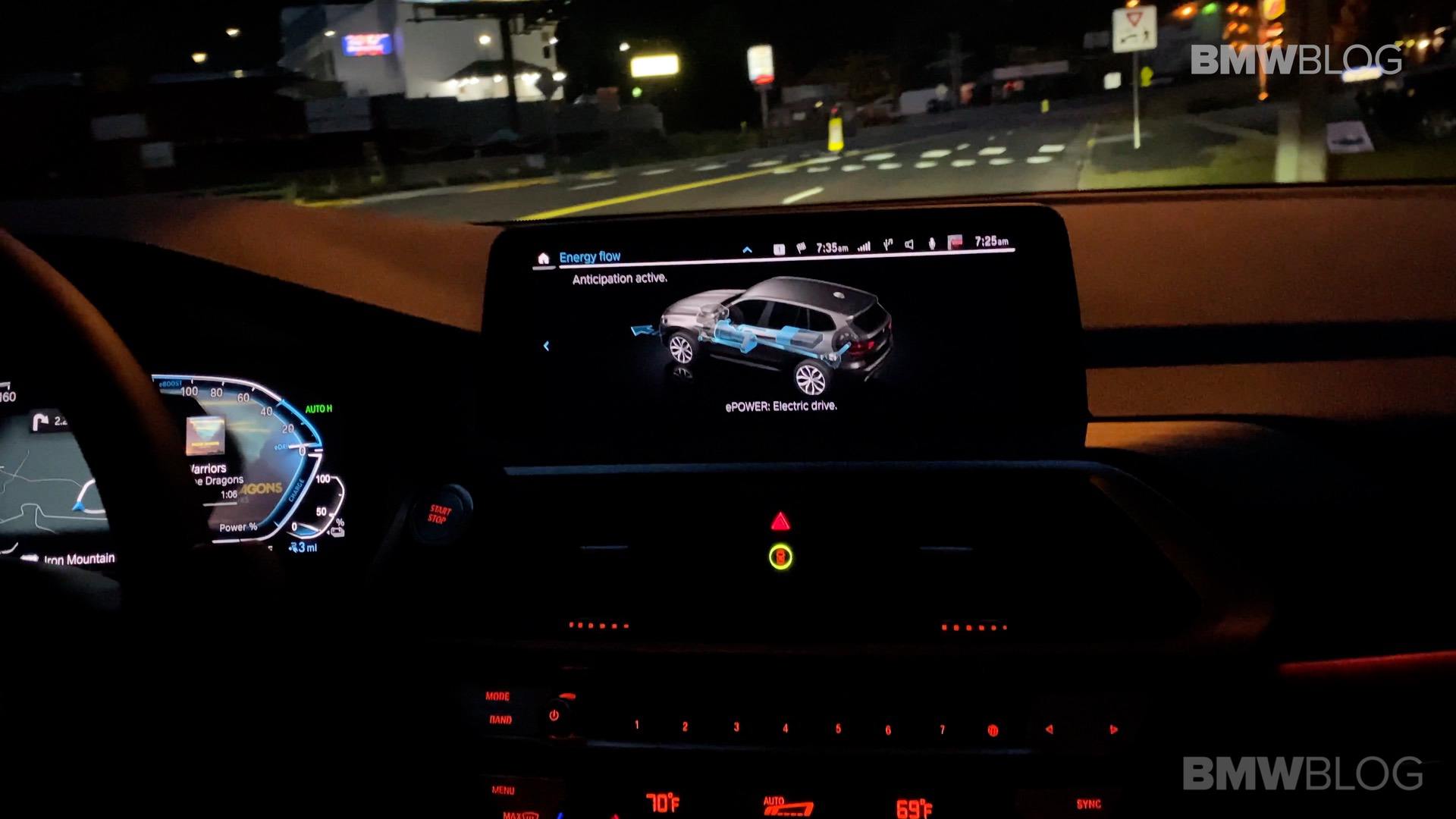 Things I would change? I wish the X3 30e had more electric driving range but understand that would have involved more weight. I also wish it would charge at a faster rate as Level 2 charging only adds 6 miles of range per hour, whereas our i3s can add 29 miles of charge from the exact same charger. All in all, we are very happy as the purchase fills our needs perfectly.

Watch our video for a thorough review including a peak under the car on a lift to find the lithium-ion 12 kWh battery pack.