It was basically four years ago when Volkswagen introduced the ID Buzz as a concept in January 2017 at the North American International Auto Show. The German automaker promised a production version would follow, and while it’s still coming, the electric take on the Microbus has been delayed. Well, the bad news concerns only North America as Europe will be getting it sooner.

Originally scheduled to arrive in the United States in 2022, the ID Buzz has been pushed back by a year. The announcement was made by Volkswagen of America’s CEO, Scott Keogh, in an interview this week with Automotive News. The delay has to do with VW’s plans for the plant in Hanover, Germany where a smaller commercial van will also be assembled. 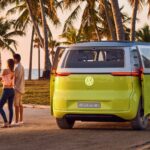 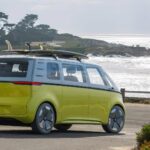 Keogh went on to mention VW has been consistently receiving phone calls from prospective buyers about when the ID Buzz would be available. That being said, VoA’s head honcho admitted “it’s not going to come quite as soon as that; it’s going to be a little bit later than that.”

When the retro-tastic microbus debuted at NAIAS in Detroit, VW said the concept was developed on the larger MEB-XL platform with the following dimensions: 4,942 millimeters (194.5 inches) long, 1,976 mm (77.8 in) wide, and 1,963 mm (77.2 in) tall. The 2017 ID Buzz had an interior spacious enough for up to eight people thanks to a generous wheelbase stretching at 3,300 mm (130 in). Electronically controlled dampers offered a silky-smooth trip for those inside the cavernous cabin. 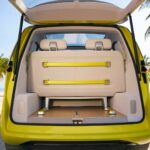 In terms of power, the concept had dual electric motors – one for each axle – providing the ID Buzz with an all-wheel-drive system and a combined output of 374 horsepower. The hardware ensured a 0 to 62 mph (100 km/h) run in approximately five seconds and a maximum speed electronically limited to 99 mph (160 km/h).

The upsized MEB platform allowed VW to envision the ID Buzz with a large 111-kWh battery pack, providing enough juice for up to 600 kilometers. Of course, battery tech has already evolved since then, and it will likely be further improved by the time the production version hits the market, thus likely resulting in a longer range.