If the Volkswagen ID.4 is a bit too mainstream for your tastes, Audi is unveiling today a more upmarket alternative taking the shape of the first-ever Q4 E-Tron. The fully electric SUV will be joined from day one by a slinkier Sportback version with coupe influences at the expense of practicality by eating into the rear headroom.

Their designs have been previewed through namesake concepts unveiled in 2019 (Q4 E-Tron) and 2020 (Q4 Sportback E-Tron), so the electric SUVs look pretty much as you’d expect. They do bring extra sophistication over the VW ID.4 and Skoda Enyaq, especially as far as the interior since it looks truly premium and worthy of the Four Rings. 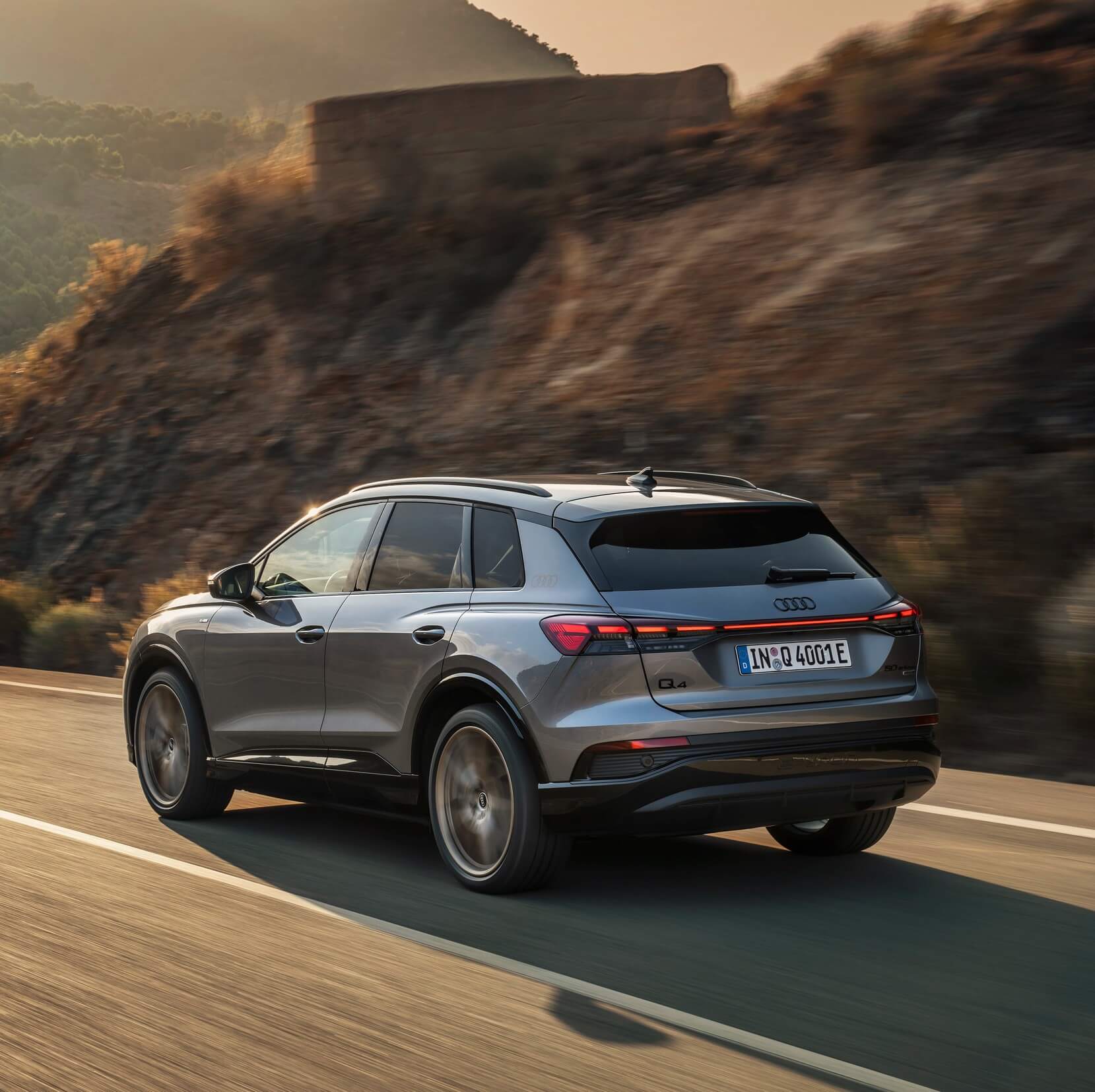 Customers will get to pick from three different drivetrains, kicking off with the rear-wheel-drive base model called “35 e-tron” featuring a single electric motor rated at 170 horsepower (125 kilowatts). The midrange model is known as the “40 e-tron” and ups the power ante to 204 hp (150 kW) while the beefier dual-motor version named “50 e-tron quattro” is getting all-wheel drive with 299 hp (220 kW) on tap.

Go for the AWD-equipped model and the Q4 E-Tron in both regular and Sportback configurations will do 0 to 62 mph (100 km/h) in a decent 6.2 seconds before topping out at an electronically capped 112 mph (180 km/h). The entry-level model is unsurprisingly slower, taking 9 seconds to complete the sprint before reaching 100 mph (160 km/h), while the midrange accelerates half a second quicker while having the same top speed as the base trim.

The dual-motor flagship gets the same 77-kWh as the midrange model, but offers less range as the electric motor added at the front axle increases weight. It will cover 303 miles / 488 km (309 miles / 497 km for Sportback model) before running out of battery juice. Speaking of weight, the 50 e-tron quattro Sportback is the heaviest of the bunch, tipping the scales at 2,140 kilograms (4,718 pounds) without a driver.

If you’re wondering why the Sportback has a slightly longer range than the regular model, it mainly has to do with its more aerodynamic body. The coupe-like SUV features a drag coefficient of just 0.26 whereas the standard Q4 E-Tron has a Cd of 0.28.

Torque is important when talking about electric vehicles because it kicks in instantly as opposed to a combustion engine where the driver has to reach a certain rpm to access the full amount. It stands at 229 pound-feet (310 Newton-meters) in the single-motor versions and reaches a healthy figure of 339 lb-ft (460 Nm) in the Quattro-equipped models.

Audi will sell its electric SUV with 19- to 21-inch wheels, including an aero version featuring black plastic inlays to improve airflow and improve efficiency. The Ingolstadt peeps tout a near-ideal 50:50 weight distribution and impressive practicality for a vehicle of this size, with a cargo area of 520 liters to 1,490 liters for the Q4 E-Tron and 535 to 1,460 liters for its Sportback counterpart. A further 25 liters of storage are spread throughout the cabin. 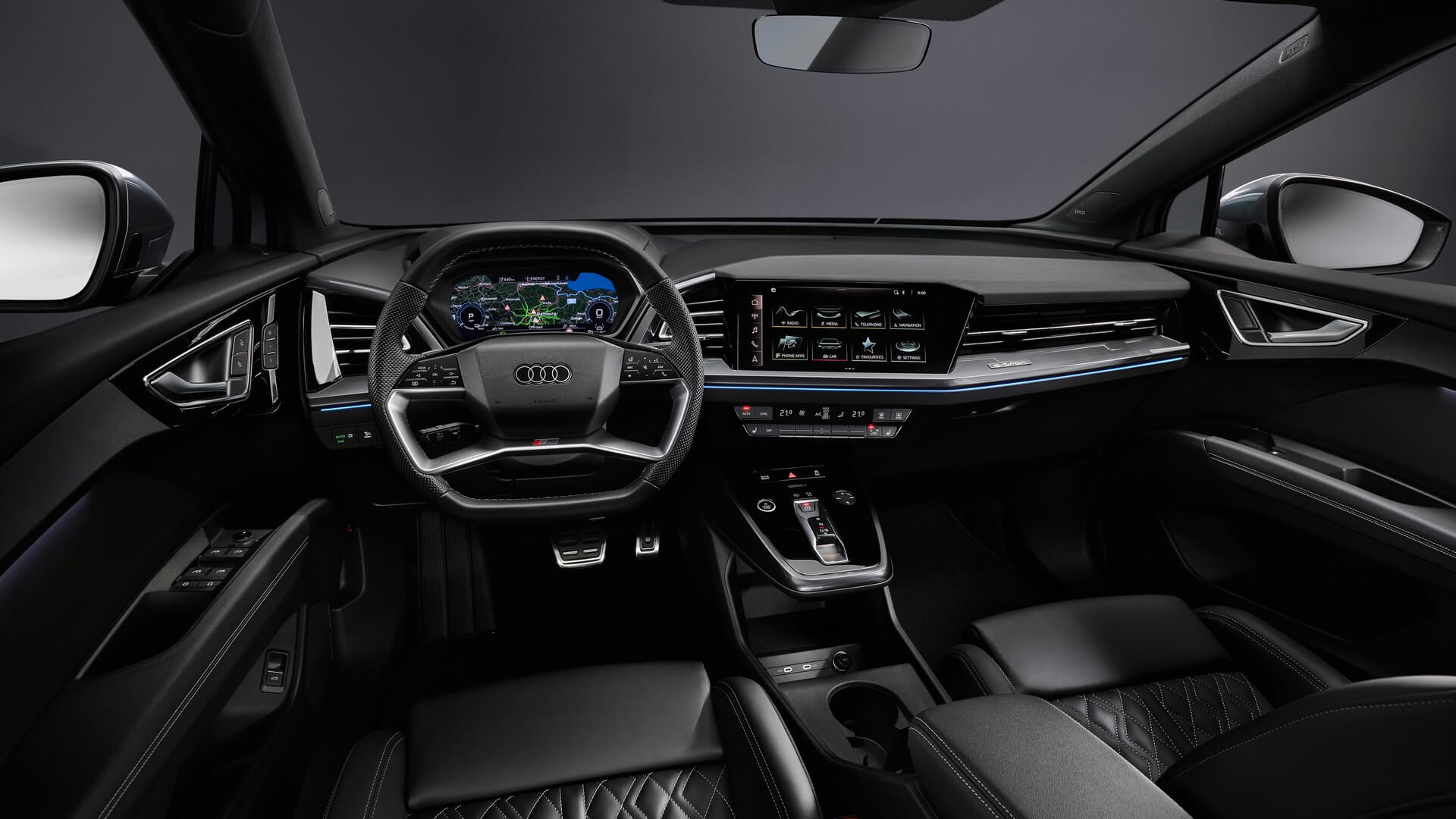 As previously revealed during the lengthy teaser campaign, the new Audi Q4 models have a fully digital 10.25-inch driver’s display and 10.1-inch MMI infotainment as standard equipment. The touchscreen can be upgraded to a larger 11.6-inch setup and buyers will also be able to order a head-up display with augmented reality tech.