It has been a long time coming but the Audi Q5 Sportback is finally here. Unveiled last year, amid the dreadful pandemic, the Q5 Sportback offers fans of the brand and new customers a choice that was missing from Audi’s portfolio so far. It’s quite a peculiar case too, as it would seem Audi is late to the game with this car, considering what the usual German rivals are doing.

The BMW X4 came out first in 2014 while the Mercedes-Benz GLC Coupe followed just a year later. From then on out, it looked like the two SUV Coupe models were simply waiting for their third friend to show up for the playdate and it just kept on running late. Finally, some five years later, the Q5 Sportback popped up. 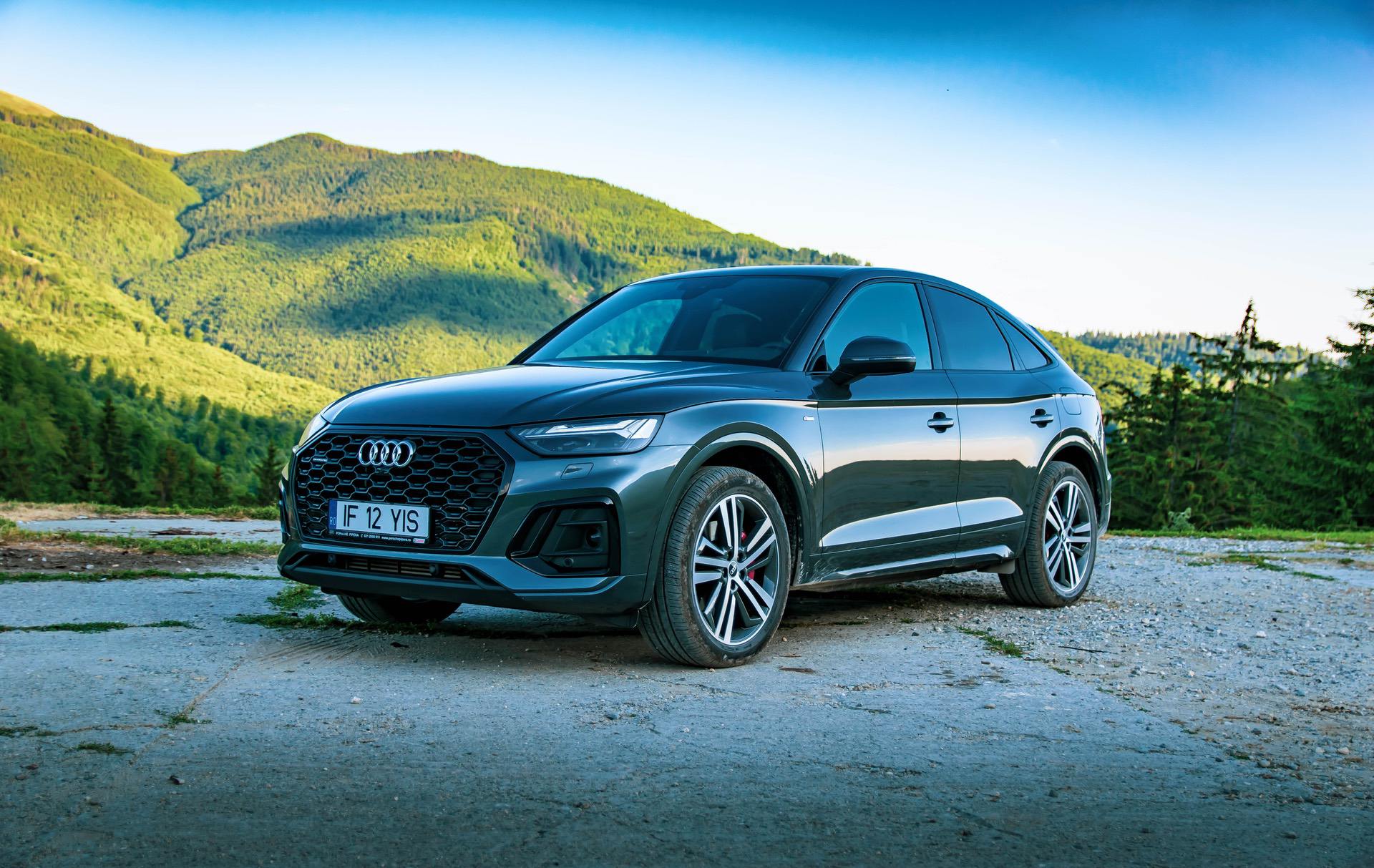 In true Audi fashion, the Sportback nameplate means that this is a sort of Coupe version of the very popular Q5 SUV. Yes, it’s that kind of car that doesn’t really make sense and yet it will sell rather well, if its rivals are anything to go by. The Q5 Sportback came out along with the facelift of the current Audi Q5 SUV and it shares a lot with it, from design to the platform underneath.

In terms of exterior design, you’ll notice a lot of familiar shapes. Up front, the unibody grille dominates the front fascia with similar design lines as the Q5 SUV. The headlamps have a similar design, the side scuttles and even the wheels are similar up to a point. Everything is basically the same up until you reach the B-pillar. From there towards the end of the car everything starts going down. Literally. 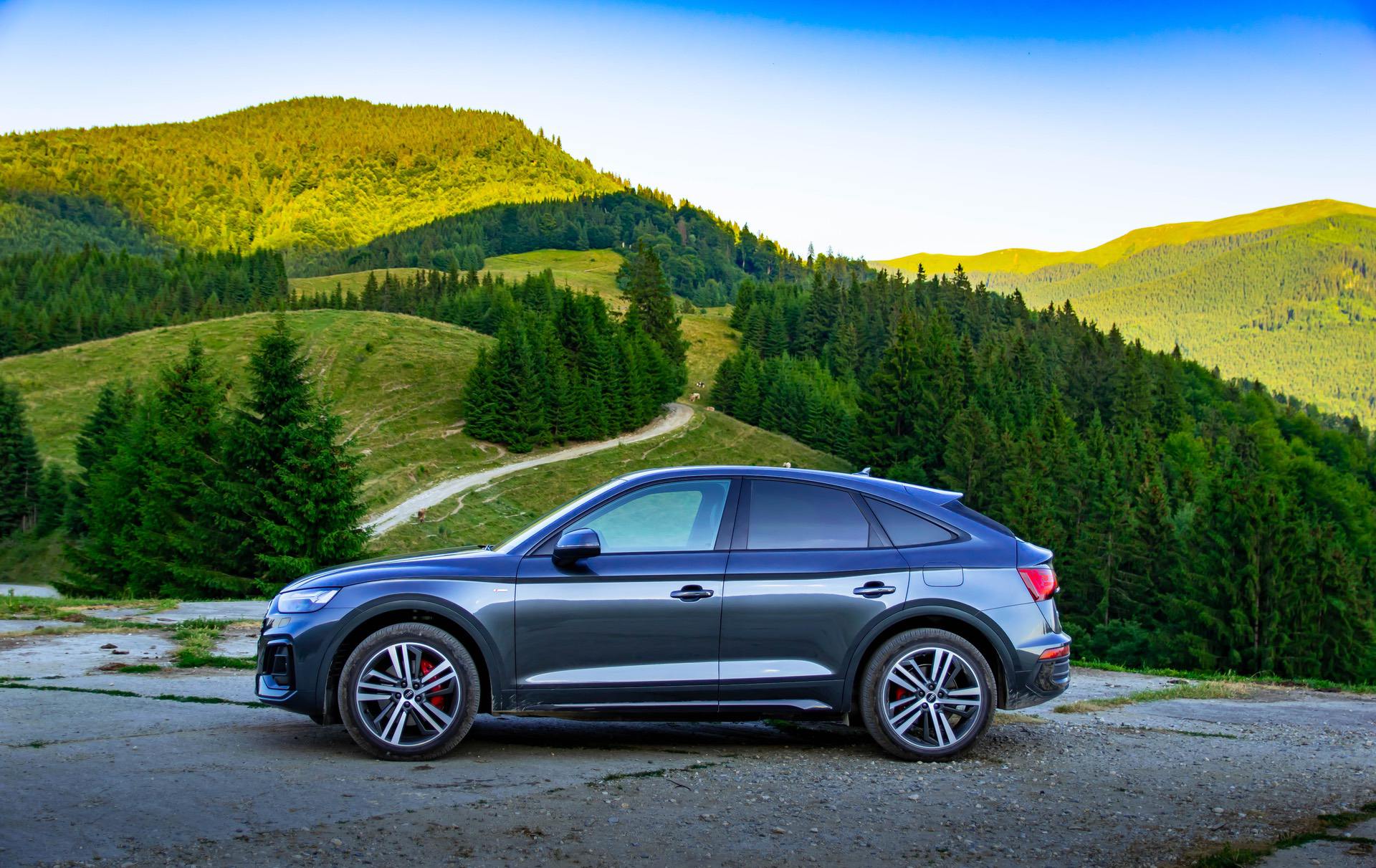 Since this is supposed to be a Sportback model, its roofline is obligated to slope towards the tailgate. It gives the car a more aggressive look overall while the tailgate houses a new design for the taillights. You can fit a number of OLED taillights on the Q5 Sportback, with different designs and animations, catering to your preferences.

The Downsides Of A Sloping Roofline

The sloping roofline also cuts into the headroom in the back and the usable space available in the boot. According to Audi, you only lose 6 millimeters of headroom, so that’s not terribly bad. But, when it comes to the boot, things don’t go over so smoothly. The boot has just 475 liters of space, mainly because of its shape but also because, this being a plug-in hybrid and all, it needs some of the room to store the battery. 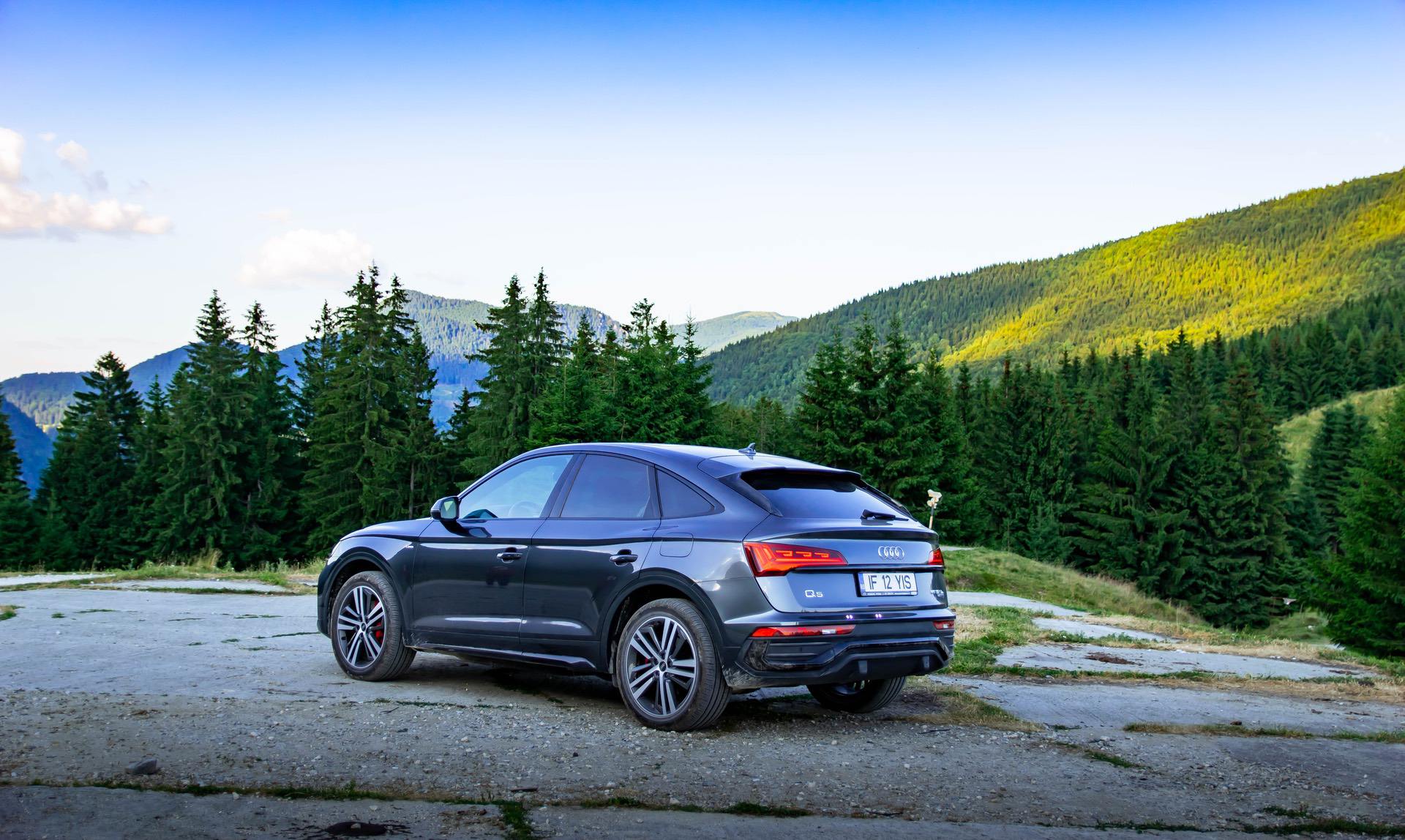 But that’s the only place where you’ll notice a difference compared to a non-hybrid version in the range. Get inside the cabin and you’ll be met with a lot of room up front, both for the head and the elbows. The fit and finish is up to par with the usual Audi standards and the Q5 Sportback felt like it was built to last 50 years.

No squeaks, not creaks and everything was flush and perfectly integrated. Since the Q5 Sportback shares its MLB Evo platform with its older brother, some things inside the cabin are exactly the same. 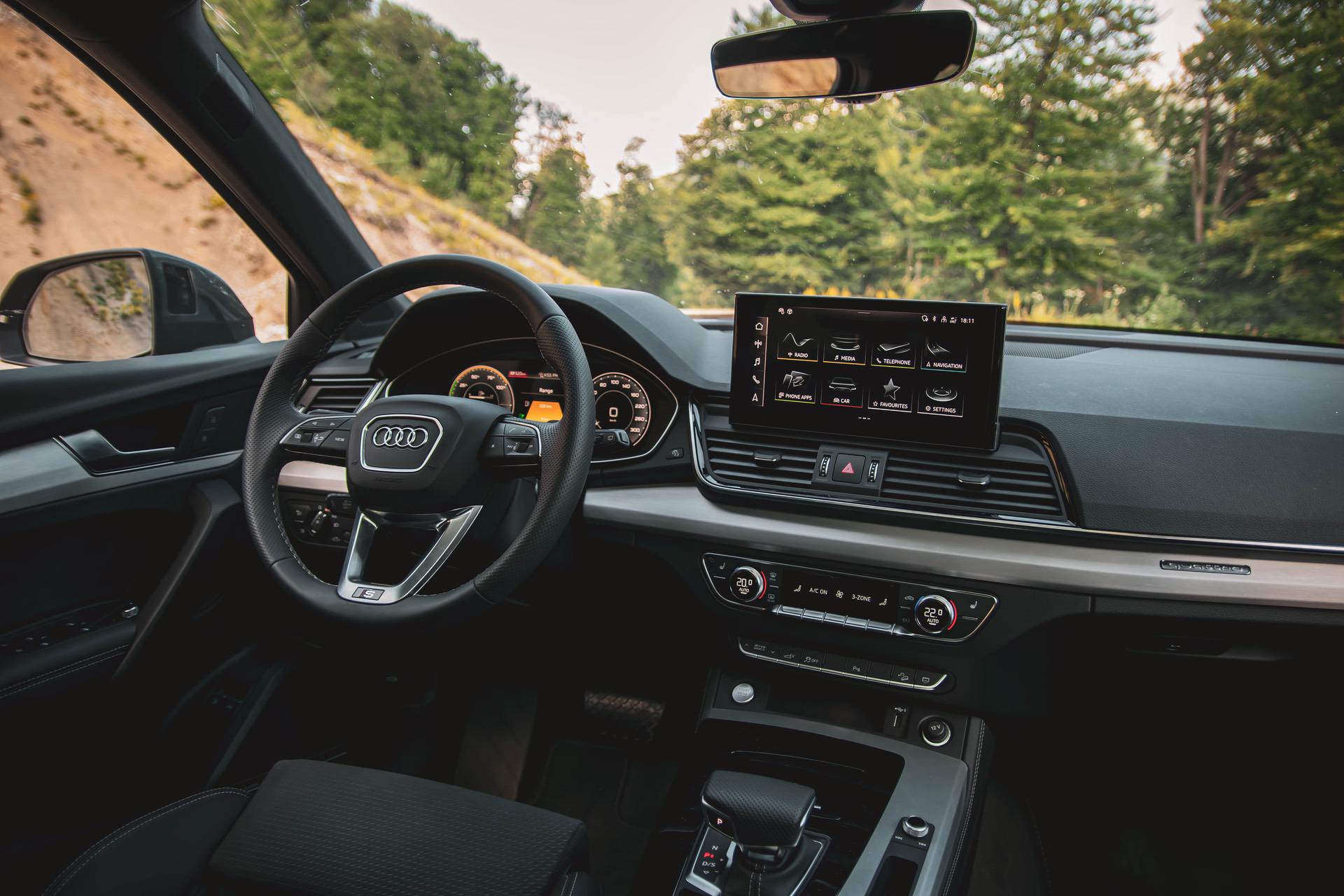 The dashboard, for example, is identical and so is the screen on top of it. Whereas in newer models you get an infotainment screen embedded into the dash, on the Q5 Sportback that’s not the case. As a matter of fact, the screen looks so out of place you start wondering whether it retracts into the dash or not. It doesn’t.

Other than that, though, there’s little to complain about. There are some areas covered in piano black that will show every single fingerprint, dust and scratches, and there’s almost no adequate place where you can put your phone. I know it may sound odd, but we’re so deeply connected with our phones and there’s just nowhere to put in in the center console. At least the storage space inside the center armrest is huge. 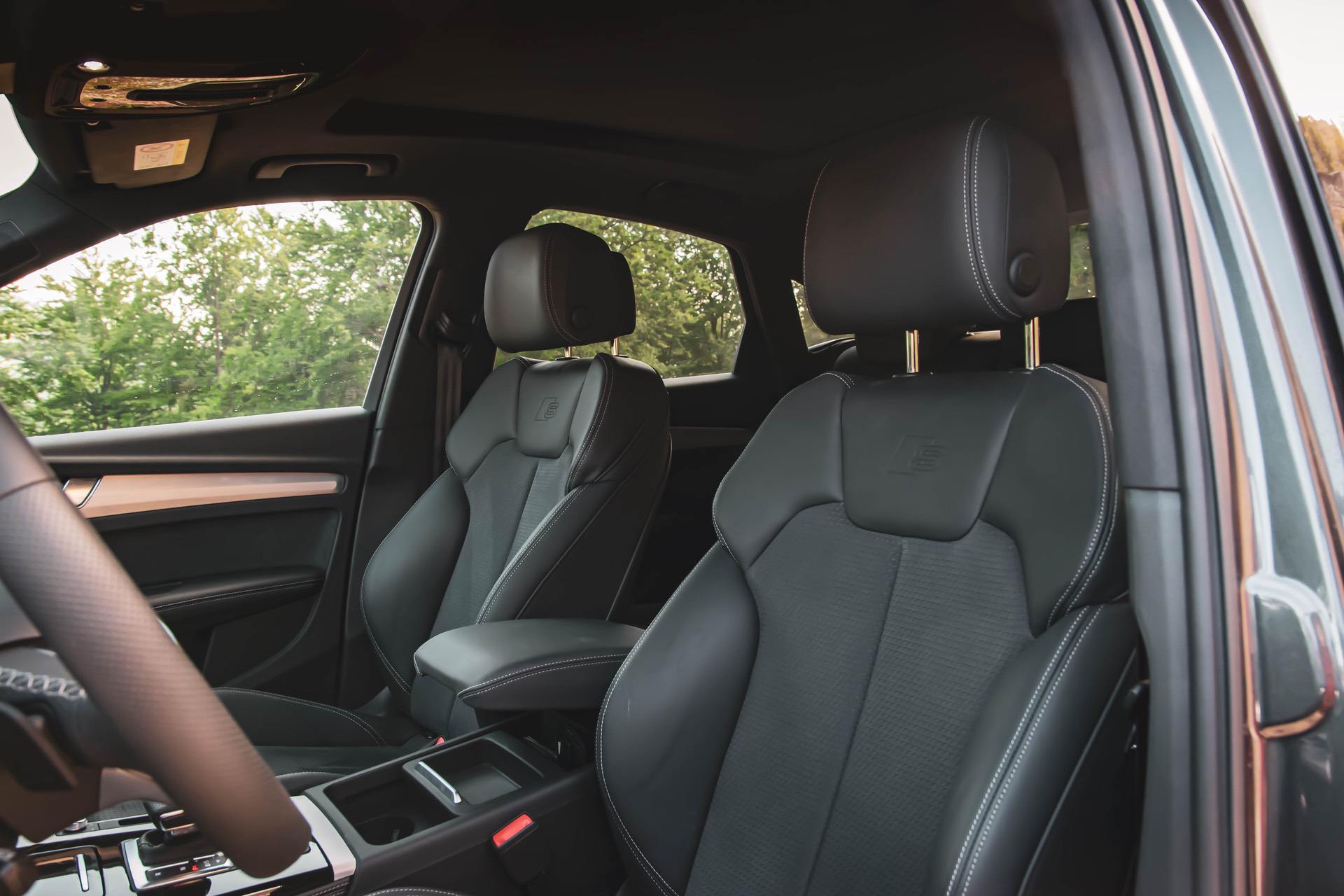 The seats of our tester were the optional S-Line ones. As a matter of fact, the car was wearing the S-Line package and it made it feel and look a lot more aggressive than usual. The leather upholstery and the Alcantara center patches felt nice to the touch while the side bolstering of the seats kept me in place while thoroughly enjoying the resources of the engine-motor combo, without feeling too harsh on longer trips.

Just like the Q5, the instrument cluster is digital with a high resolution, and all the info you could possibly need. The steering wheel right has a nice touch to it, with perforated leather and a red S at the bottom, to remind you of the optional package installed on the car. 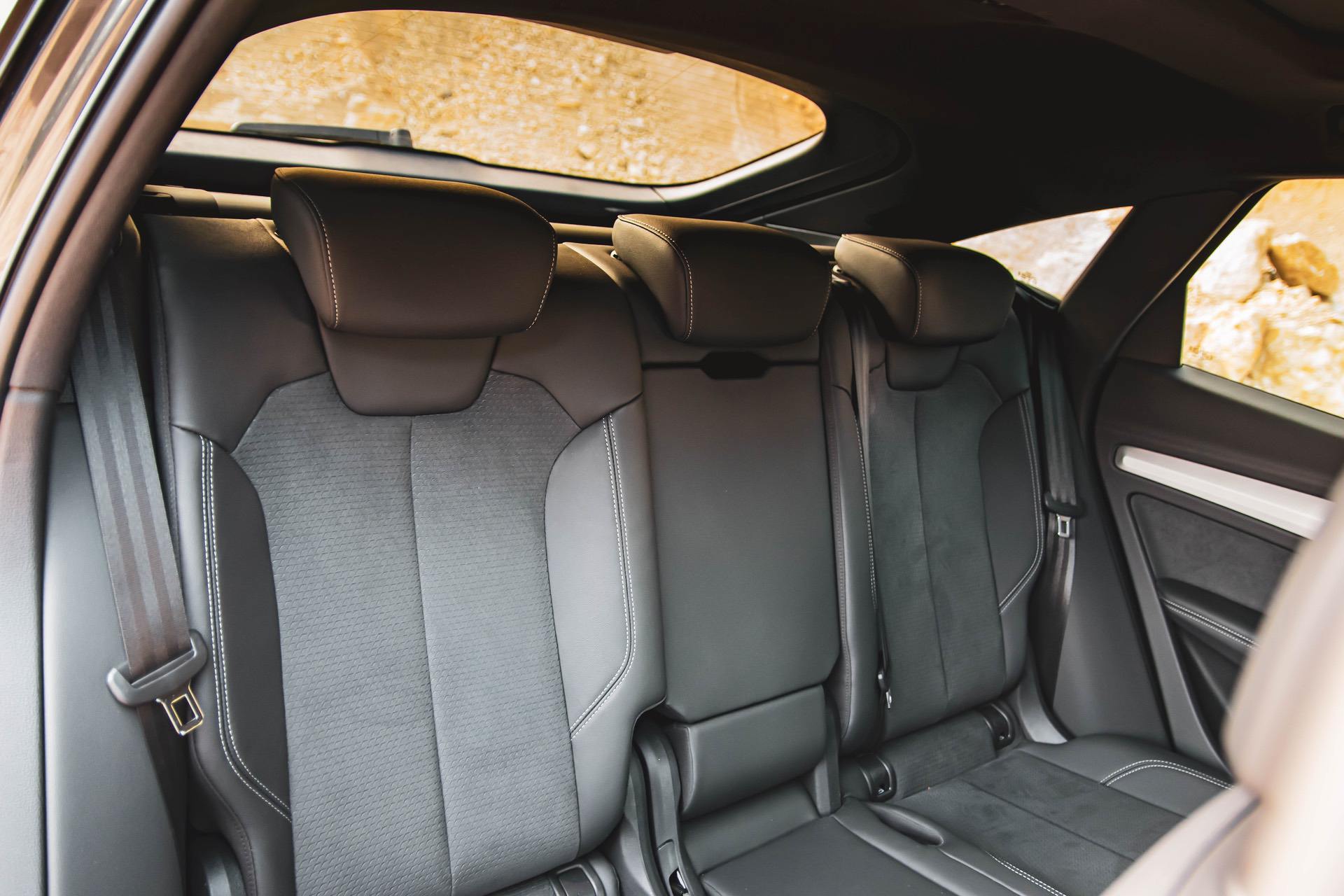 As for the rear seats, they are a bit more cramped than on the regular Q5 but you’ll have enough room if you’re about 6-ft tall. Anything above that and you might be a bit uncomfortable. That’s understandable though as, even though the wheelbase and width of the car are the same as on the Q5, the roof is some 62 millimeters lower, at a total of 1,600 millimeters in height for the car.

Shared Drivetrains With The Q5

As for the drivetrains, they too are shared with the rest of the Q5 range and a lot of other models in the VAG line-up. Our tester though was the most powerful Audi Q5 Sportback you can buy today, aside from the SQ5. This was the Audi Q5 Sportback 55 TFSIe. As the name suggests, it is a hybrid.

If you want to buy a plug-in hybrid Q5 Sportback you have two choices: the Audi Q5 50 TFSIe or the 55 TFSIe. And even though the names suggest that there’s a lot more going on under the hood of the latter, that’s not exactly true.

Regardless which one you get, you’ll have the same powertrain layout available. That’s a 2-liter, 4-cylinder turbocharged petrol mill making 265 HP and 370 Nm hooked up to an additional electric motor, good for 143 HP and 350 Nm of torque. The battery is also the same: 14.4 kWh usable, stored in the same space in the boot. 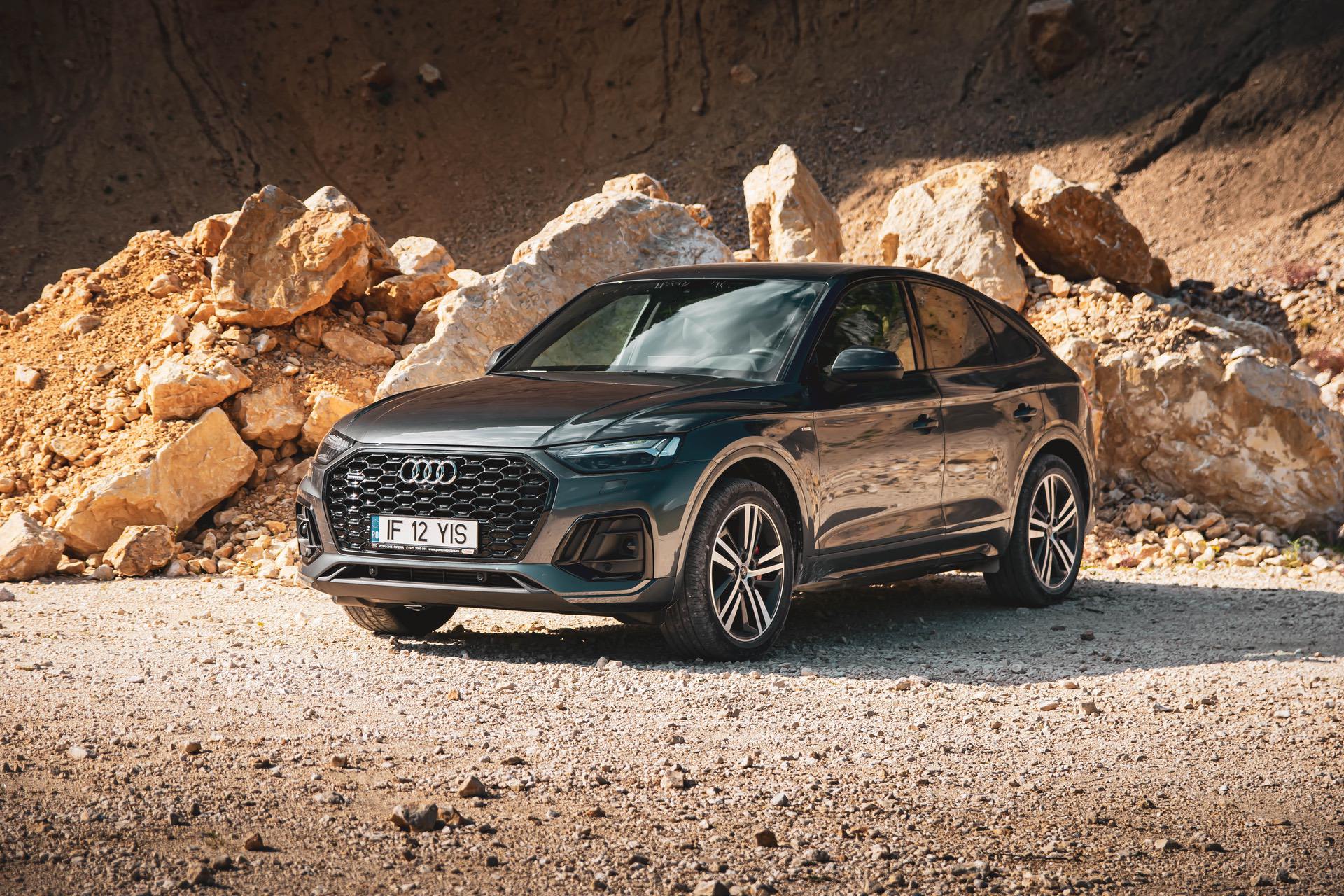 We were lucky enough to be handed the keys to the 55 TFSIe, which is, as we already mentioned, the most powerful Q5 you can buy today. However, it’s not also the fastest. That’s because all those electric goodies added to it make it heavy. To be more precise, a 55 TFSIe model is exactly 300 kilos heavier than a non-PHEV counterpart and that matters when it comes to handling and performance. That’s why, the less powerful SQ5 is faster to 100 km/h from standstill by 0.2 seconds, compared to the 5.3 seconds the 55 TFSIe model needs. 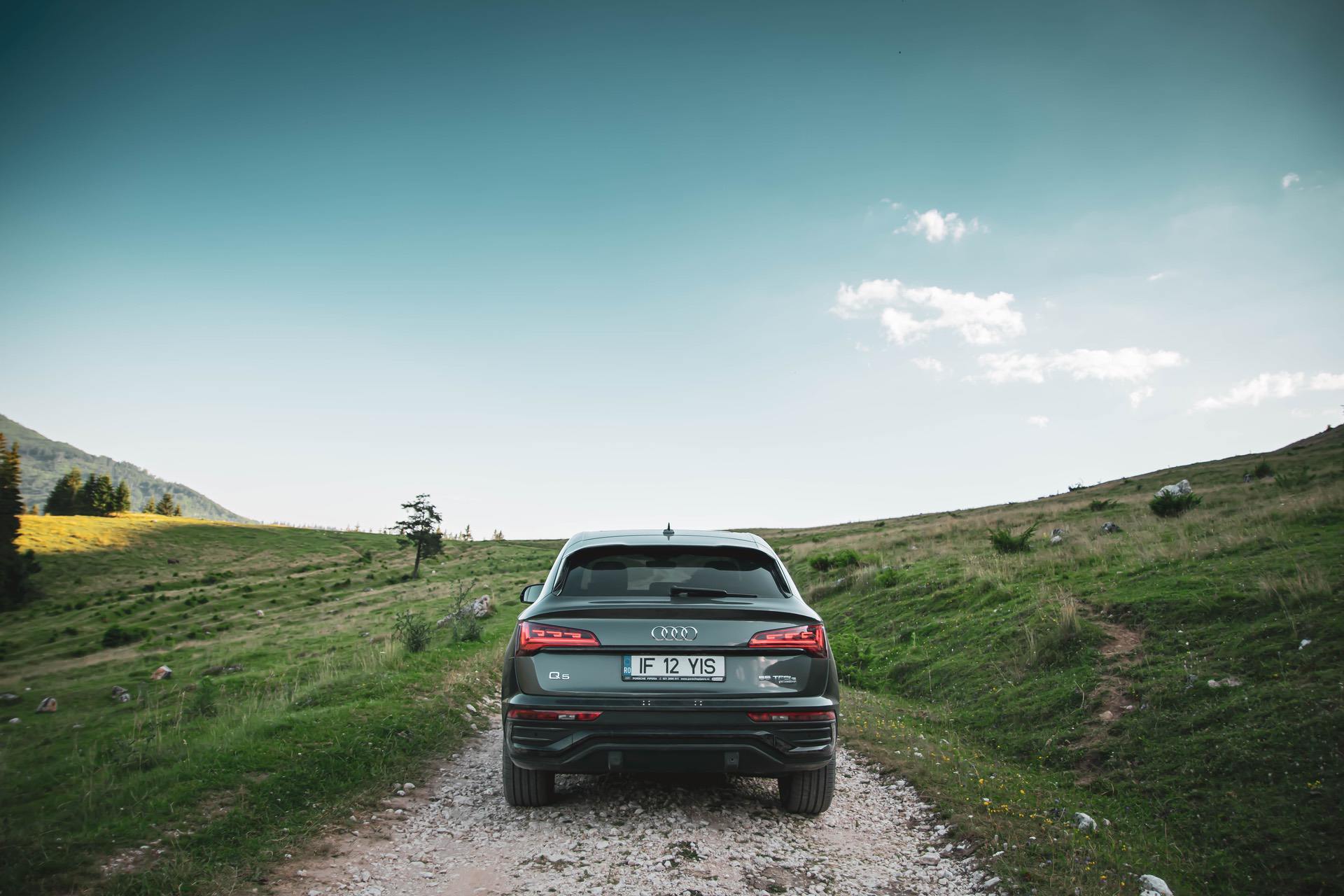 You can feel that extra weight in other cases too. The suspension, for example, had to be reinforced to cope with the added kilos and that takes a toll on the ride quality. Don’t get me wrong, the Q5 is a master at absorbing the wrinkles in the road, but over certain surfaces it will transmit some of the jolts inside the cabin and, through the seats, into your backside. Furthermore, at times, those jolts will also make themselves heard.

And it’s not just the comfort that has to suffer, it’s the handling too. We already know that having the most power in the range doesn’t make the 55 TFSIe model the fastest in a straight line. But I have a hunch that it’s even worse if you were to take it to a track. There’s a decent amount of lateral grip, when you decide to push this car to see how well it can handle, but as the speed piles on, so are the forces pushing you out of the ideal line. The tires start to squeal and understeer pops up, ruining the fun. 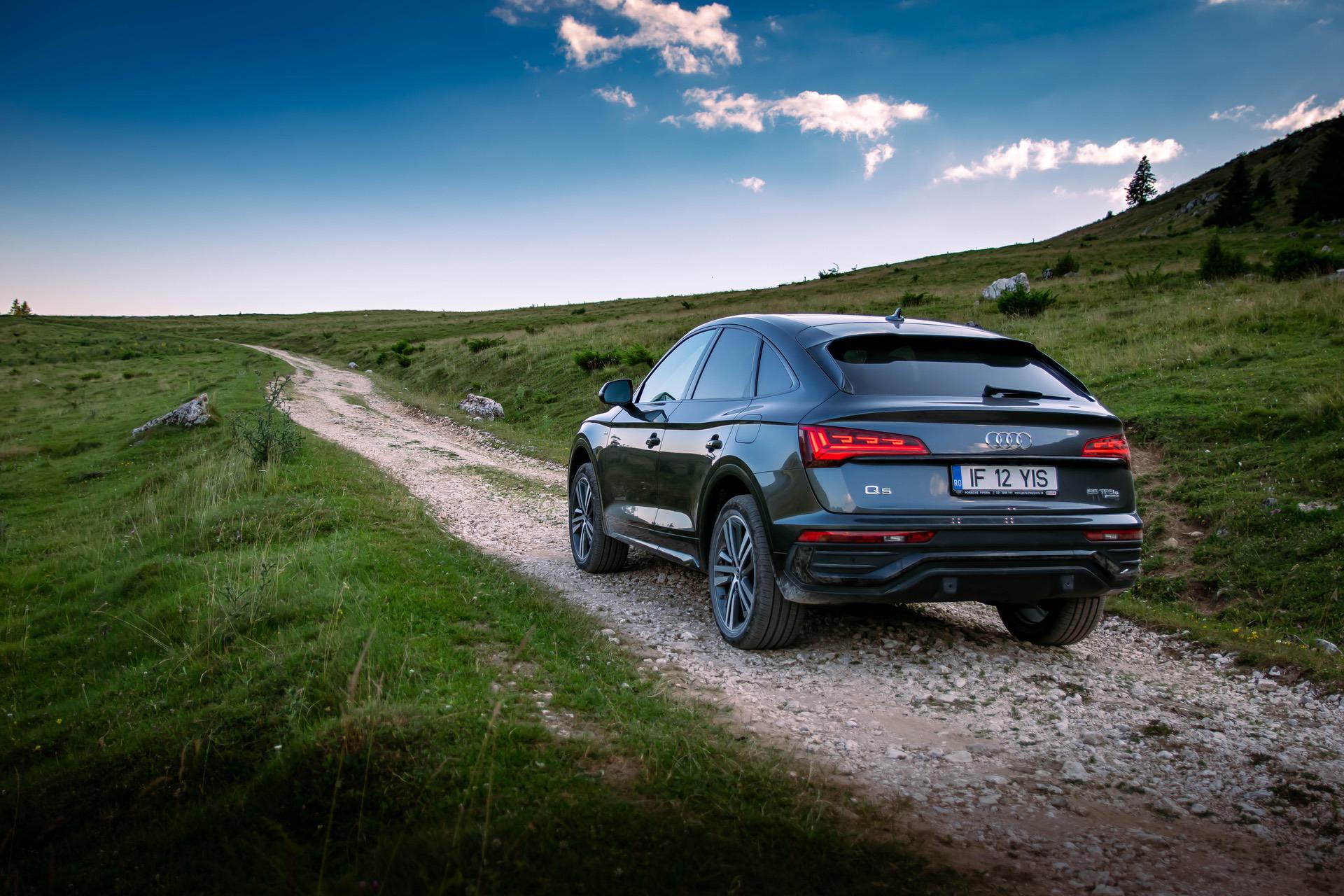 But this approach might not be the best at the end of the day. The Audi Q5 Sportback 55 TFSIe was not designed to be a track queen. It was engineered to cater to the needs of those wanting some stylish German car in the parking lot, to be used mainly around town, where the PHEV would really shine. And that’s exactly where it feels most at home.

Drive it around town and the Q5 Sportback is a rewarding companion. It’s eerily quiet inside the cabin, especially since you’ll be doing a lot of driving in EV mode, and it offers a commanding view of the road ahead. It’s comfortable and, if you’re careful, you can get a decent amount of electric range out of it.

To this end, we tested it out over several days, in different driving scenarios. The car starts off in EV mode if the battery is charged. However, if you want, you can choose from three other modes as well, using a dedicated button located under the HVAC panel. You can go for Auto-Hybrid mode, which lets the car decide what powerplant to use or two modes that allow you to either recharge the battery up to a certain percentage, using the internal combustion engine, or maintain the current state of charge.

With a full battery, the average electric range recorded around town was 48 kilometers (30 miles) with an energy consumption around 28 kWh/100 km covered. That’s a bit shy of the 60 kilometers claimed by Audi but still pretty decent.

Go outside the city limits and the car can drive in electric mode at speeds up to 140 km/h but not for long. After that, you’ll be relying solely on the internal combustion engine and the average fuel consumption recorded was 6.5 l/100 km (36.2 mpg) which isn’t bad at all, considering you rarely get to use the electric motor. 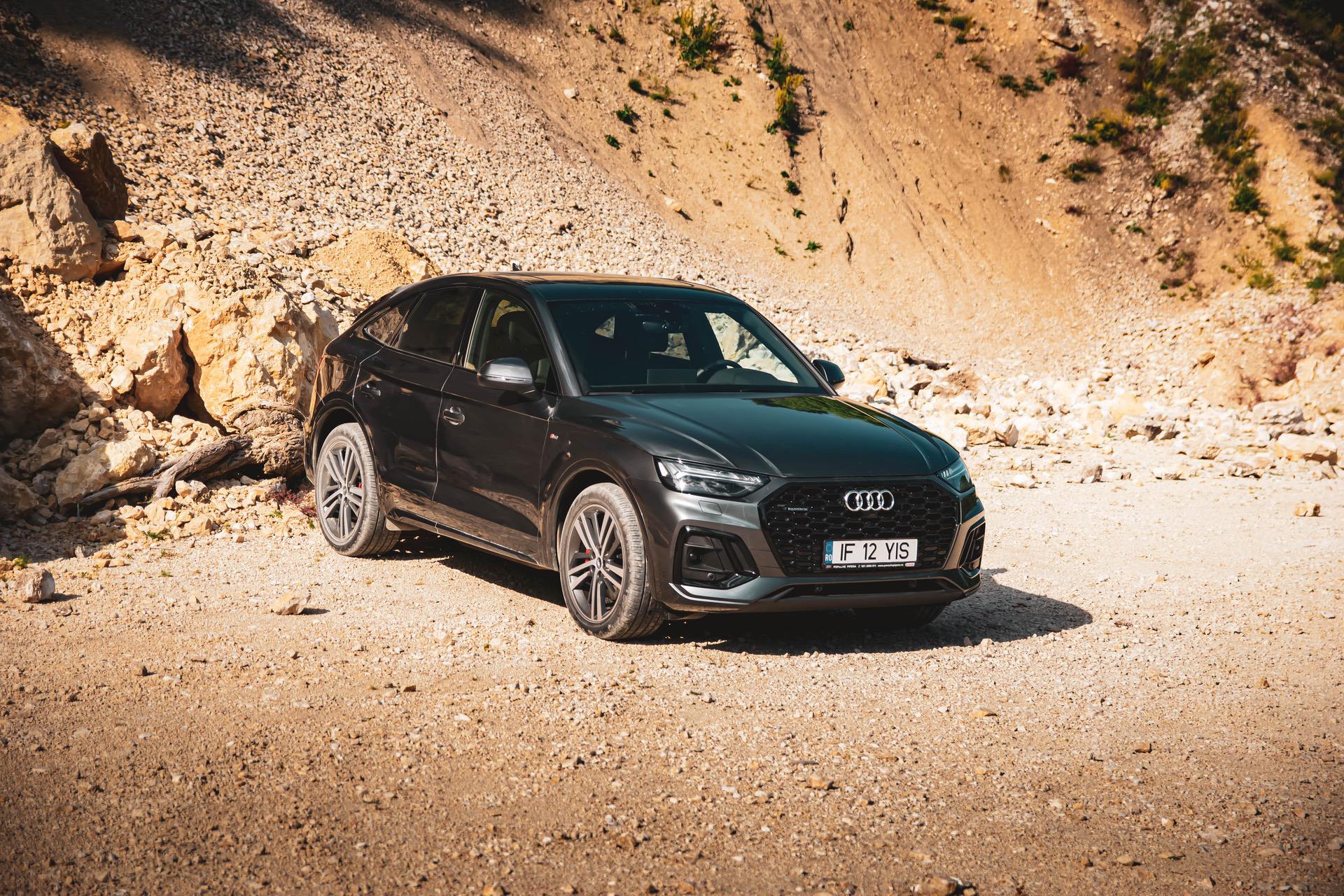 The 2-liter, 265 HP petrol mill does its job rather well and you rarely hear any noise from it inside the cabin. Furthermore, even after the battery shows 0% charge in the on-board computer, the car still has a buffer available so that you can actually drive the Q5 Sportback TFSIe as a regular full-hybrid. That also means you get a small boost from it, in case you need it, under hard acceleration.

However, as it is the case with every plug-in hybrid out there, you really have to be sure you need such a setup before committing to buy. Plug-in hybrid cars have a very limited scenario in which they actually work. They have to be recharged and used at least partially as electric vehicles, to make any sort of sense. 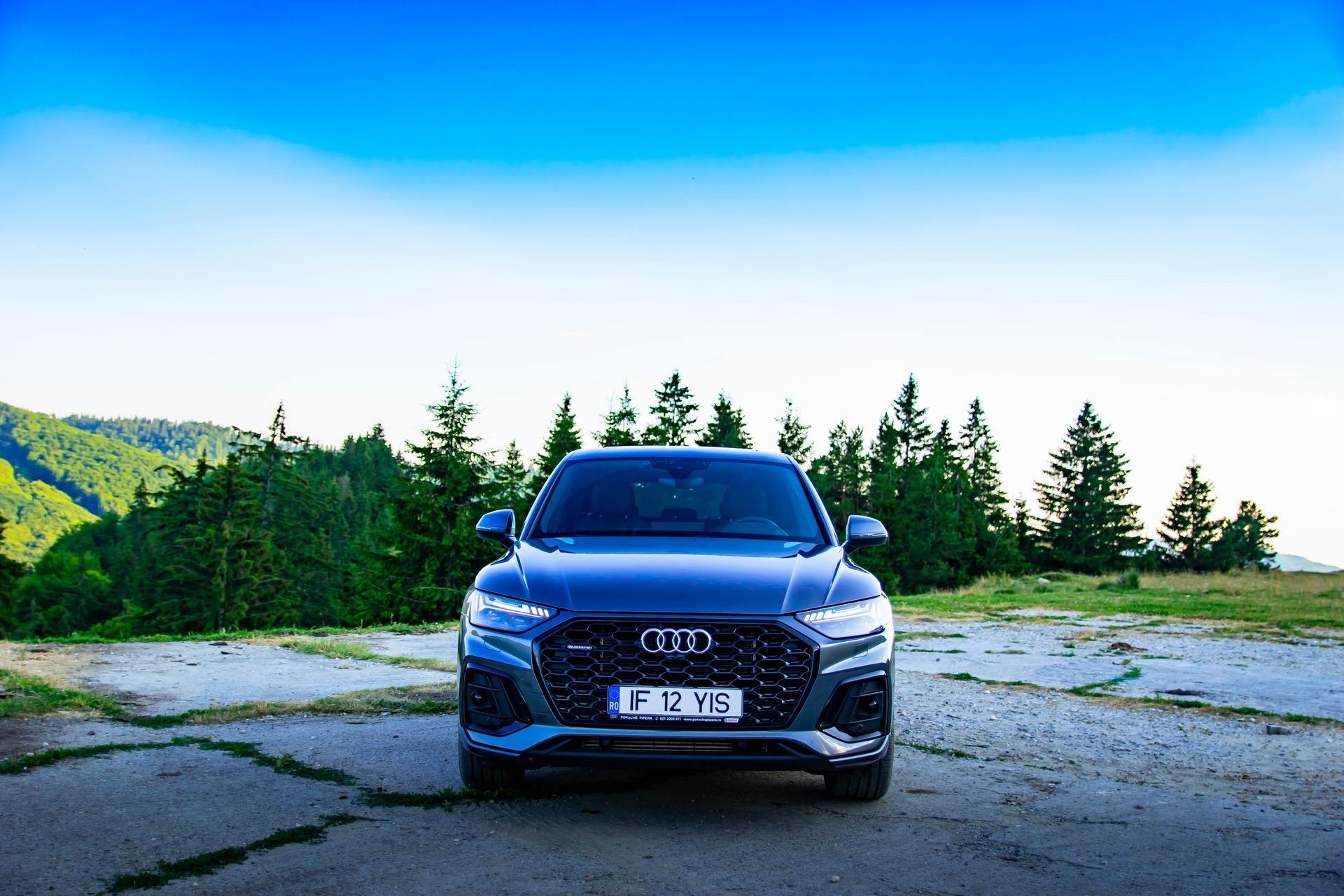 If you’re going to buy this car and only charge it occasionally, you’re better off with a ‘regular’ petrol or diesel powered Q5. At least you won’t be carrying an additional 300 kilos with you everywhere, increasing your fuel consumption. Instead, if you can charge your car every day (either at work or at home) and use it as an electric vehicle at least half the time, the Audi Q5 55 TFSIe is for you, provided the electric range is enough for your needs.