After last year’s AMG EQS 53, Mercedes’ performance division is giving the go-faster treatment to the smaller sedan as well. It too gets discreet styling upgrades over the Benz version, including the adoption of a modern Panamericana grille as a nod to the combustion-engined AMGs. Of course, those vertical slats were first seen back in the 1950s on the 300 SL (W194) race car.

The AMG EQE 53 doesn’t look substantially more aggressive than the standard Mercedes-Benz EQE 350 introduced last year. Aside from the grille, it boasts a trunk lid spoiler and mildly revised bumpers with a somewhat sportier design. It has also been fitted with bespoke wheels measuring either 20 or 21 inches, with both being aerodynamically designed. Being the hotter version, it’s offered with ceramic brakes for superior stopping power provided you opt for the larger alloys. 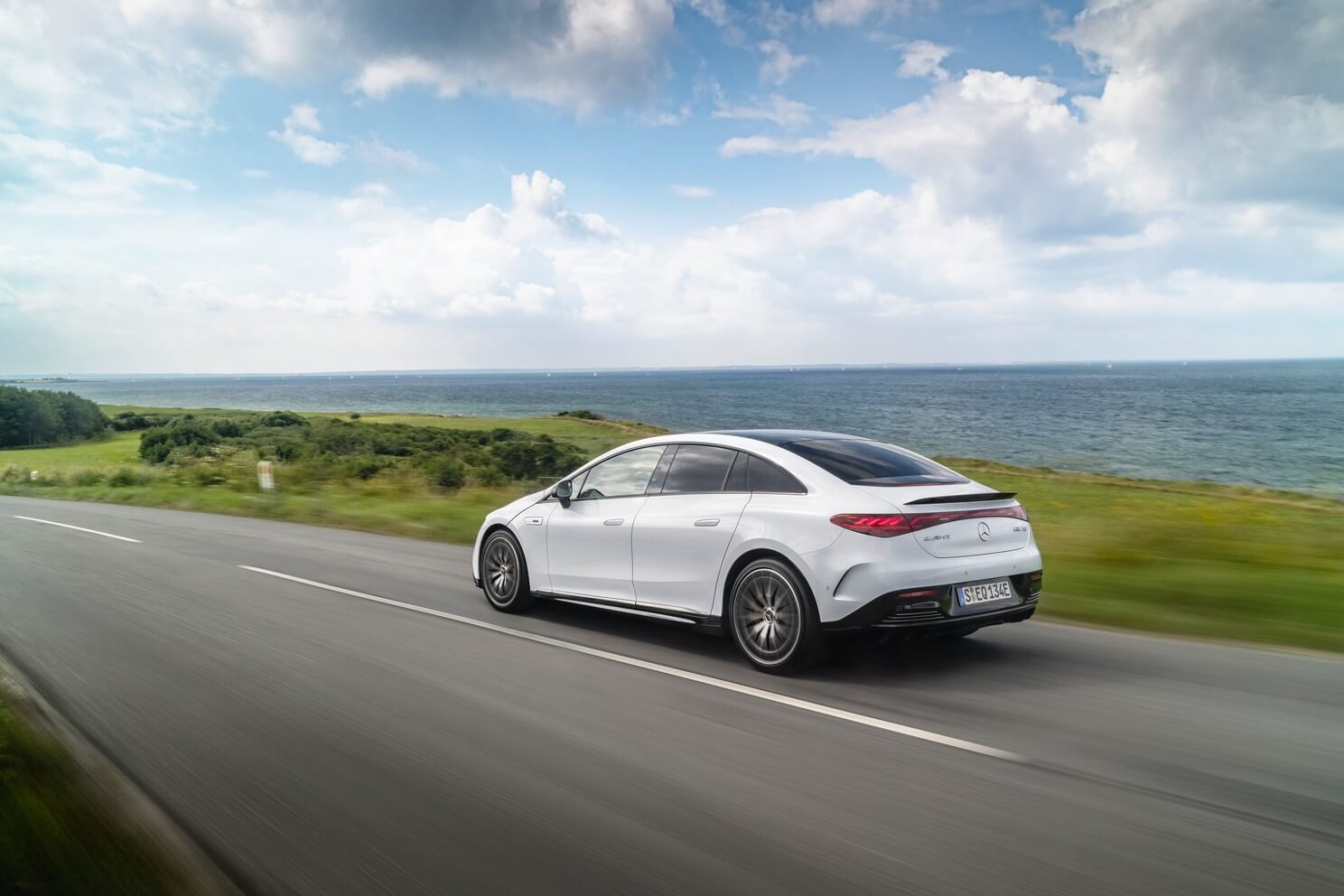 Inside, the most significant upgrade is the adoption of AMG front seats with greater lateral support and unique upholstery featuring contrasting red topstitching. The EQE 53 will also be offered in Nappa leather as an alternative to the standard MB-Tex finish with microfiber. These fancy seats have the AMG logo on the headrests along with AMG badges on the backrests.

To separate it from the Benz version, AMG fits the hotter EQE with sports pedals and a flat-bottomed steering wheel covered in Nappa leather. The driver can switch between several recuperation levels by using the shift paddles mounted behind. Rounding off the tweaks are the AMG-branded floor mats and illuminated door sills. 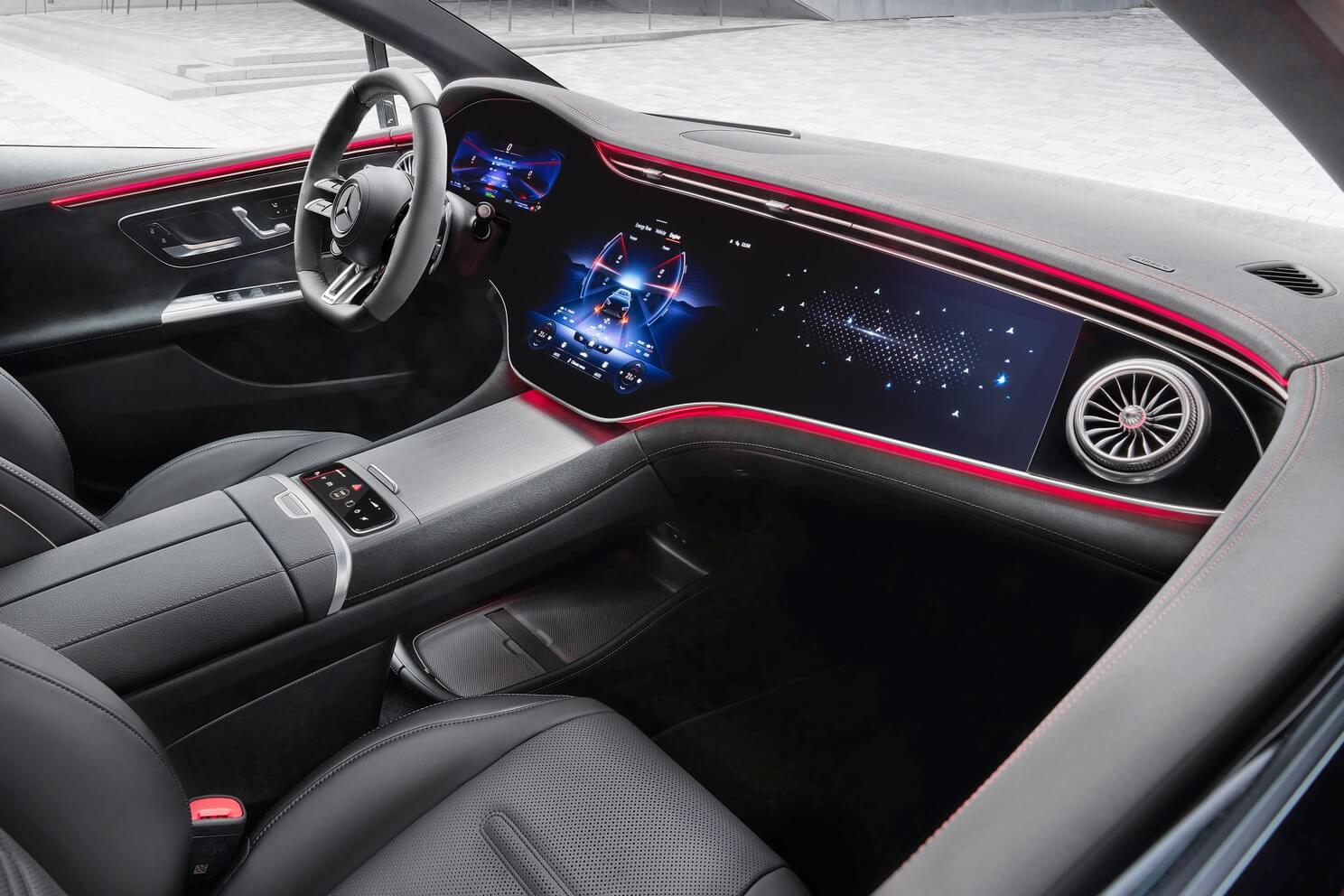 Unlike the EQE 350 with a single electric motor powering the rear axle, the AMG EQE 53 adds a front e-motor to give the performance electric sedan an all-wheel-drive setup. The dual-motor configuration enables a meaty output of 617 horsepower and 701 pound-feet (950 Newton-meters) of torque. Getting the optional AMG Dynamic Plus Package raises those numbers to 677 hp and 738 lb-ft (1,000 Nm).

It also lowers the 0 to 60 mph run by two-tenths of a second to just 3.2 seconds. In addition, the AMG EQE 53 with the AMG Dynamic Plus Package has a higher top speed of 149 mph (240 km/h) vs 137 mph (220 km/h). Bear in mind the full output is only available if the car is in Race Start mode with the boost function turned on. Without it, power comes down to 617 hp, which is the same amount available in Sport+ model.

Switching to Sport mode lowers the total output to 555 hp, while the Comfort mode offers 493 hp at the driver’s disposal. Turning on Slippery mode will detune the powertrain to only 308 hp. 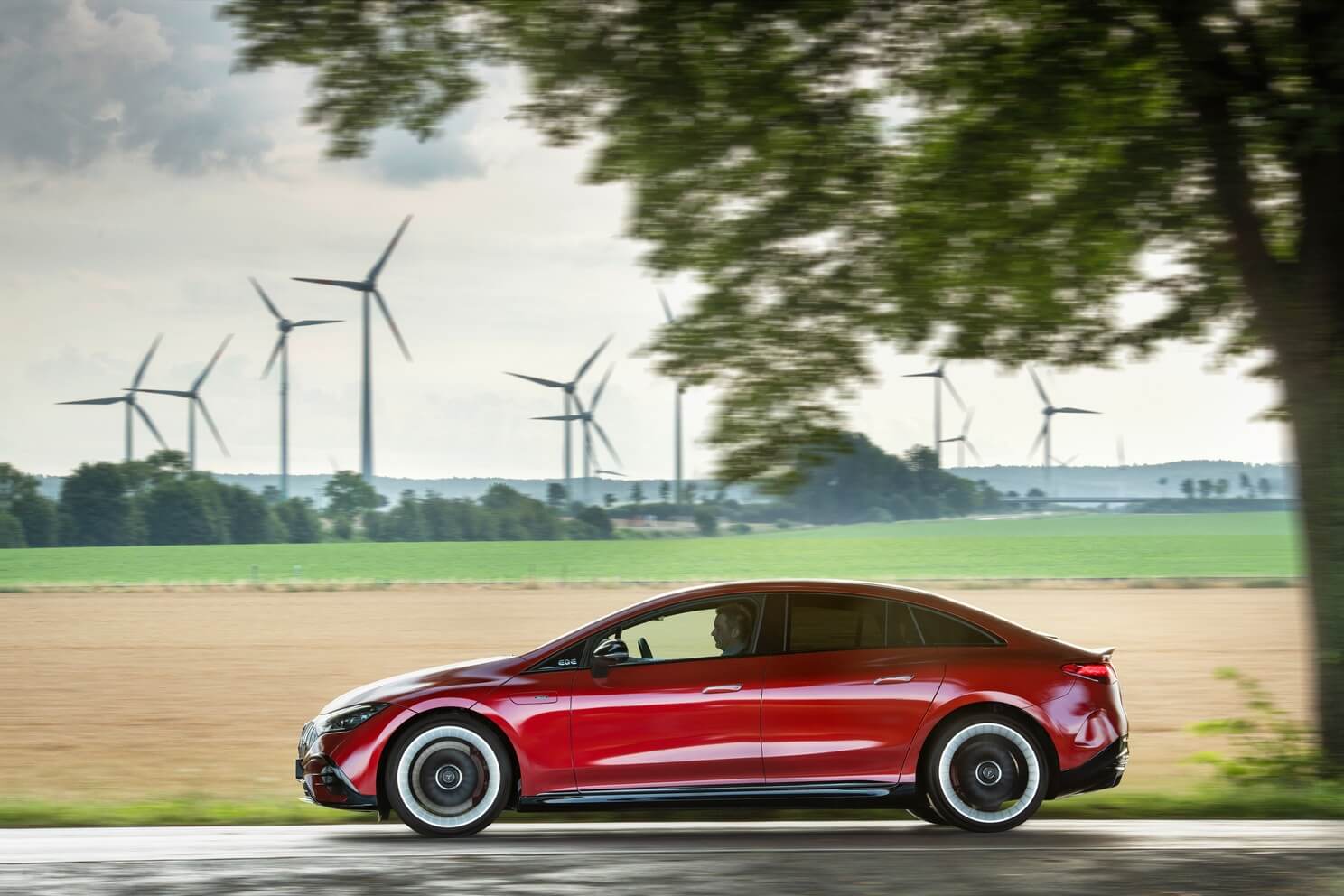 It uses the same battery as the standard model, namely a lithium-ion pack with a usable energy content of 90.6 kWh. Charing it at 170 kW brings 112 miles (180 kilometers) of WLTP range in only 15 minutes. It should be mentioned the acceleration numbers provided above are available only if the battery is at a state of charge of at least 70%. With the battery fully charged, Mercedes estimates the sporty electric sedan will cover up to 322 miles (518 kilometers) in the WLTP cycle before running out of juice.

Additional noteworthy features include the implementation of rear-wheel steering and an air suspension derived from the larger EQS. Also taken from Mercedes’ flagship is the Hyperscreen, an optional infotainment system with a massive touchscreen and another display just for the front passenger.

The 2023 Mercedes-AMG EQE 53 will go on sale later this year in Europe before arriving in the United States.