BMWBLOG takes a new look at the BMW i8 hybrid sportscar. In their review, they go over the design of the BMW i8 while posing the question: Should you buy a BMW i8? BMW first introduced the i8 in a vision form in 2009, followed later by a couple of concept versions. Then in 2014, the carbon-fiber built BMW i8 Coupe came to market, followed a year later by the BMW i8 Roadster.

The BMW i8 is good for 369 horsepower and 420 pound-feet of torque, powering all four wheels. But that’s less important than where the power is coming from. Which in the i8’s case, is the middle. Being mid-engine makes the car more naturally balanced and offers driving dynamics totally unique from more traditional front engine options. 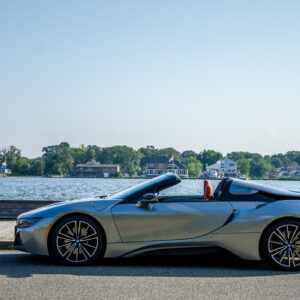 Top speed was also adequate: the BMW i8 can get from 0-60 mph in about 4.4 seconds. Interestingly, the BMW i8 was also the first hybrid/EV to use a two-speed transmission for its electric motor at the front. While the i8 isn’t as economical as BMW had hoped, it’s still more economical than most supercars, capable of returning 35 MPGe. Because of that front electric motor, the latest iteration of the BMW i8 can drive up to 22 miles on pure electric power alone.