With a 0 to 60 mph in three and a half seconds, the Mustang Mach-E GT Performance Edition is no slouch. It sacrifices some of the range for more torque compared to the regular GT, packing 480 horsepower and 634 pound-feet (860 Newton-meters). These are undoubtedly healthy numbers, but Ford is already suggesting even hotter derivatives of the electric SUV are en route.

Jason Castriota, the company’s global brand director for battery electric vehicles, sat down and had a chat with Road & Track about how Ford ultimately decided to go with the “Mustang” name. To emphasize it’s worthy of a pony car’s moniker, “you can imagine that we can hopefully develop the Mustang Mach-E into greater performance versions.” 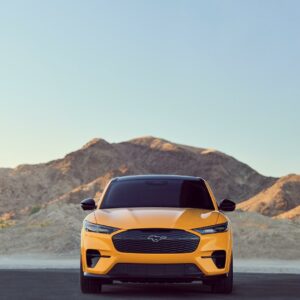 He went on to mention that while using “Mustang” made perfect sense for a performance-oriented SUV, it would be incompatible with other types of vehicles, such as commercial vans or pickup trucks. He strongly believes the word “Mustang” can be applied to “vehicles that can capture performance, moving people fast and free.”

Interestingly, the Mach-E wasn’t initially supposed to carry the “Mustang” name, but it “became readily apparent to the team that this car needed to be a Mustang.” Jason Castriota admitted the unexpected switch forced the development team to make huge changes to the electric SUV’s platform, including the drivetrain and level of performance. In addition, the vehicle’s proportions and silhouette had to be altered to fit a Mustang-badged model.

We can only imagine it took a lot of work to borrow cues from a two-door sports car and adapt them for an entirely different type of vehicle. With five doors, all-wheel drive, a taller body, and an electric powertrain, the Mach-E is a vast departure from the iconic ‘Stang that up until now had remained faithful to the original formula from 1964.

Even Jason Castriota admits he was nervous about what would purists think about the idea of a Mustang SUV, but it all worked out in the end:

“I had the dubious honor of presenting the Mustang Mach-E to our Mustang club presidents. Let’s say, they came in arms crossed, a stern look on their faces. They understood that we’re not taking away anything they love. This is another steed in the stable.”