Ford kicked off customer deliveries of the Mustang Mach-E in North America only a few days ago, but the electric SUV is already getting the first round of price cuts. It can be had for as low as $43,995 if you factor in the destination charges. Compared to a V8-powered Mustang GT Fastback, it’s still $6,920 more expensive.

Or is it? As discovered by Cars Direct, those interested in getting behind the wheel of the zero-emissions SUV can benefit from incentives valued at up to $11,000. How is that possible? There’s the $7,500 federal tax credit coupled with regional discounts such as the California Clean Vehicle Rebate ($2,000) as well as the Clean Fuel Reward ($1,500). Factor in all these freebies, the base price of a Mustang Mach-E drops to $32,995.

Doing the math, the first-ever SUV to carry the Mustang badge is $4,080 cheaper than the Mustang GT Fastback equipped with the standard six-speed manual gearbox. Add the optional 10-speed automatic transmission and the price difference drops to $2,485. 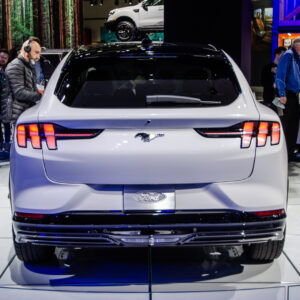 Not only that, but Ford Credit even has a better finance deal for the Mustang Mach-E, offering a 60-month plan with 1.9 percent APR whereas a Mustang GT has a significantly higher 2.9-percent APR rate for 60 months. You must act fast as Ford’s deals will come to an end on January 4.

Needless to say, the Ford Mustang Mach-E and the Mustang GT are in no way direct competitors, but the SUV does inherit some of the pony car’s DNA in terms of design and how it drives. Factor in the instant torque, greater practicality, and eco-friendly nature, some might be tempted to opt for the EV rather than the naturally aspirated V8 machine.

Even with these important discounts, we’re tempted to believe few people will actually cross-shop the two cars even though both carry the “Mustang” moniker. For this reason, Ford is unlikely concerned the newcomer will cannibalize sales of the iconic sports car since the overlap is minimal. As for why the Blue Oval decided to stick the Mustang badge on an electric SUV, that’s another story…