General Motors did more than just tease the Cadillac Celestiq today as it also provided another glimpse at the Chevrolet Bolt EUV. A new teaser image + video combo allows us to hop behind the new steering wheel of the Bolt crossover and also check out the fully digital instrument cluster. The very first model from the bowtie company to offer Super Cruise hands-free driver assistance system will debut next month, together with a refresh for the regular Bolt.

From previous teaser episodes, we got to learn the Bolt EUV will mark another premiere for Chevy by being the first production car to use sequential LED turn signals. Both flavors of the EV will come only in a front-wheel-drive configuration and are scheduled to enter production this summer. The crossover is reportedly getting an optional sunroof, which the normal Bolt hasn’t offered so far.

The teaser released today during the digital-only CES 2021 shows a light bar mounted within the steering wheel rim to show the status of Super Cruise. In addition, the steering wheel incorporates a camera to monitor the driver and make sure they’re paying close attention to what’s up ahead. Seeing the advanced semi-autonomous driving system in a small and affordable car goes to show the technology is ready to trickle down after originally debuting a few years ago on the Cadillac CT6.

While GM is working on Ultium batteries promising up to 450 miles (724 kilometers), the two Bolt models are not going to use the new battery tech and therefore will have a lower range. Judging by the battery charge level displayed in this teaser and the 235 miles of available range, we’re guessing the Bolt EUV will do 270-280 miles between charges. We’re getting the impression some important upgrades will be made inside the cabin in terms of quality, with nicer materials here and there. The Electric Utility Vehicle (EUV) will likely offer a roomier cabin since there could be a bump in size over the standard hatchback. 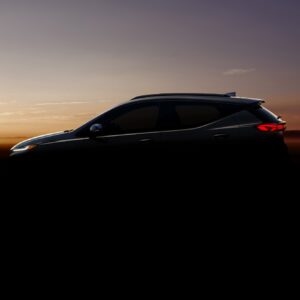 With production beginning this summer, it means customer deliveries of both Chevy Bolt models will probably begin before the end of 2021.