Tesla Model 3 – TEST DRIVE and REVIEW – Is This The Best EV?

It’s been called the most anticipated automobile in history by numerous news outlets. Nearly half-a-million people plunked down a $1,000 (refundable) deposit to reserve one, years before they would actually be able to take delivery of it. They did so without ever seeing the actual production version, without being able to sit in one let alone test drive it, and without knowing what the actual cost was going to be. That. Is. Crazy.

Yet, I admit that I’m one of the crazy ones. On March 31th, 2016, I waited until the line of about 250 people that came before me dissipated, and then walked into the Tesla store at the Short Hills Mall in New Jersey and handed them $1,000 with no clear knowledge of when my car would be available, what exactly it would look like or how much it would cost. Walking out of the mall I thought to myself, “Did I just order a car, or did I just join a cult?” 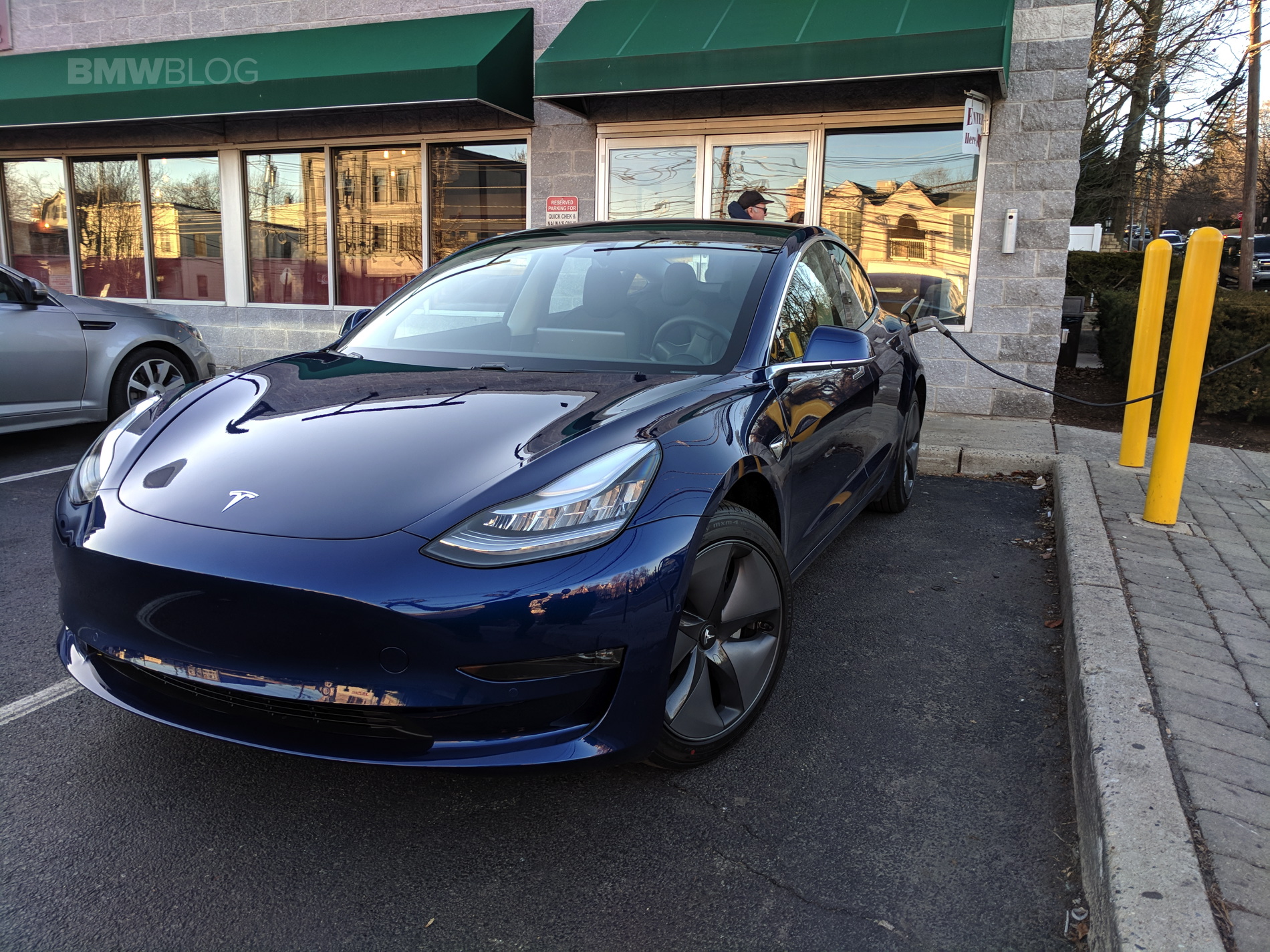 It’s nearly two years later and I still don’t have my Model 3. Tesla has pushed my estimated delivery date back twice now. Originally, my estimate was late 2017 to early 2018, but after another delay just this week, my new delivery window estimate is now April 2018 – June 2018.

Luckily for me, we aren’t in urgent need of car and can wait. I recently took possession of a 2018 BMW i3 Sport, and my wife has a car to use until the Model 3 arrives. The i3 Sport is actually my fifth BMW electric car, and I have a long history of driving BMW EVs dating back to 2009 when I was in BMW’s MINI-E test program.

So when it comes to electric cars, I’m used to being called crazy. I’ve been saying, blogging and writing about how battery electrics were soon going to replace internal combustion for nearly a decade now, and only recently have people begun to think that might be true.

Tesla, by the way, has had a lot to do with that. While most other OEMs were busy making small compliance EVs, Tesla has been going head to head with the traditional OEM’s luxury models, and faring pretty well at that. Model S sales have consistently surpassed BMW, Mercedes, Audi, Porsche, Lexus and Jaguar, making it the best-selling car in its class in the US.

But will the Model 3 also do that to the competition in the compact premium and midsized classes? Judging from the reservation list and early reviews, it just might. I was able to secure the use of a Model 3 from a friend who had recently taken delivery, and below are some of my thoughts.

Appearance: The exterior styling is excellent, in my opinion. Styling of course is highly subjective, I really like how the car looks. It has a nice blend of sporty aggressiveness as well as conservative class. 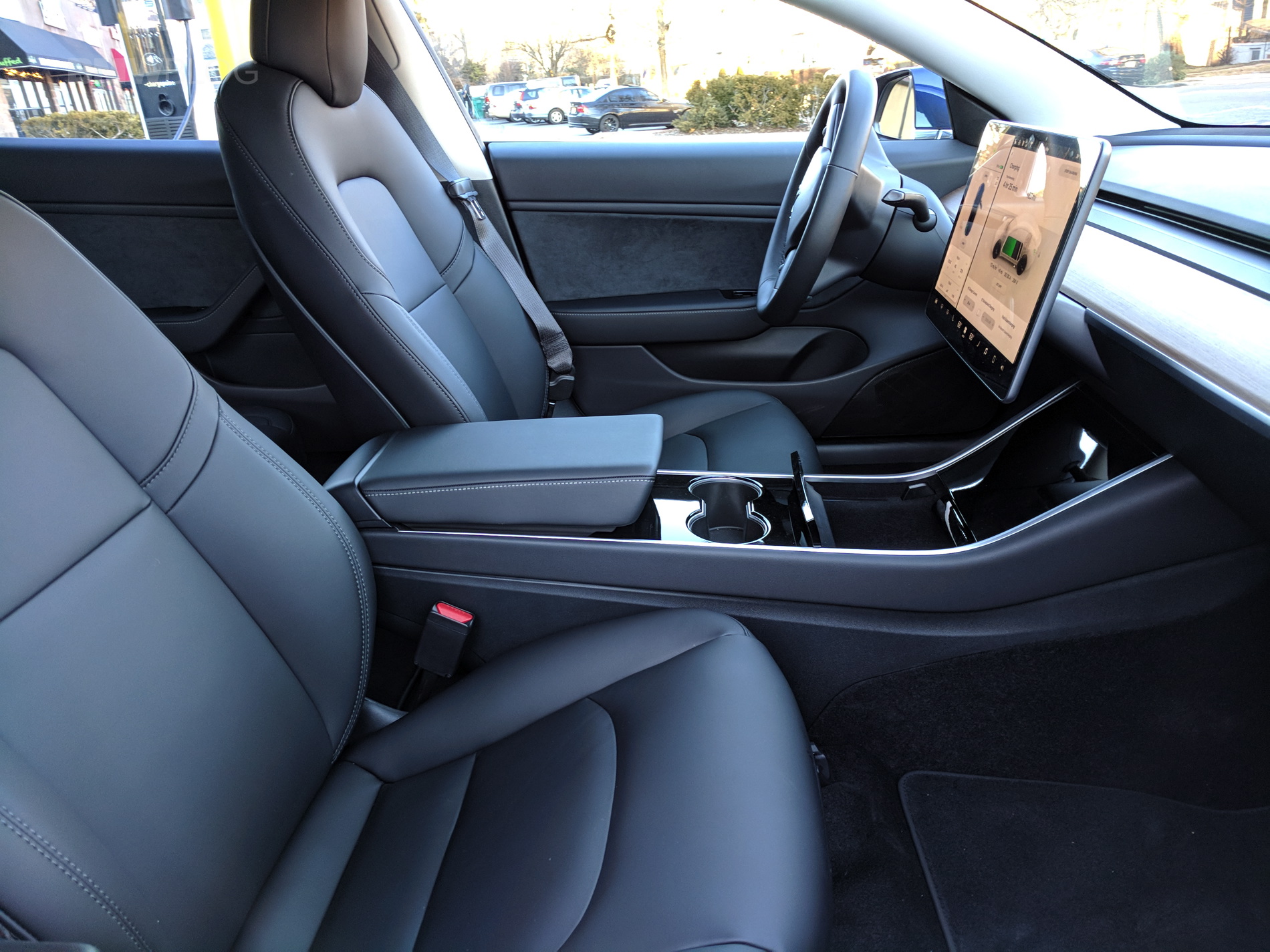 Interior: The minimalist interior gets marks in both the good and the bad categories. Everything is controlled by the huge center touch screen. It’s pretty intuitive, and I was able to perform most tasks immediately, without getting help from the car’s owner.

Although it’s definitely going to take some time for new owners to get used to having everything controlled by center screen. Not having buttons and levers to perform common tasks definitely feels unnatural at first. The seats are very comfortable and supportive. They are much better than the first-generation Model S seats were.

Tesla has since updated the Model S seats and the “Next Generation” seats are very supportive and comfortable. I place the Model 3’s seats in between the original Model S seats and the ones currently used for comfort and support. The rear seats are comfortable and there’s plenty of leg and head room for most adults. The rear seats fold flat so longer cargo can extend up into the rear seating area from the trunk, if necessary. 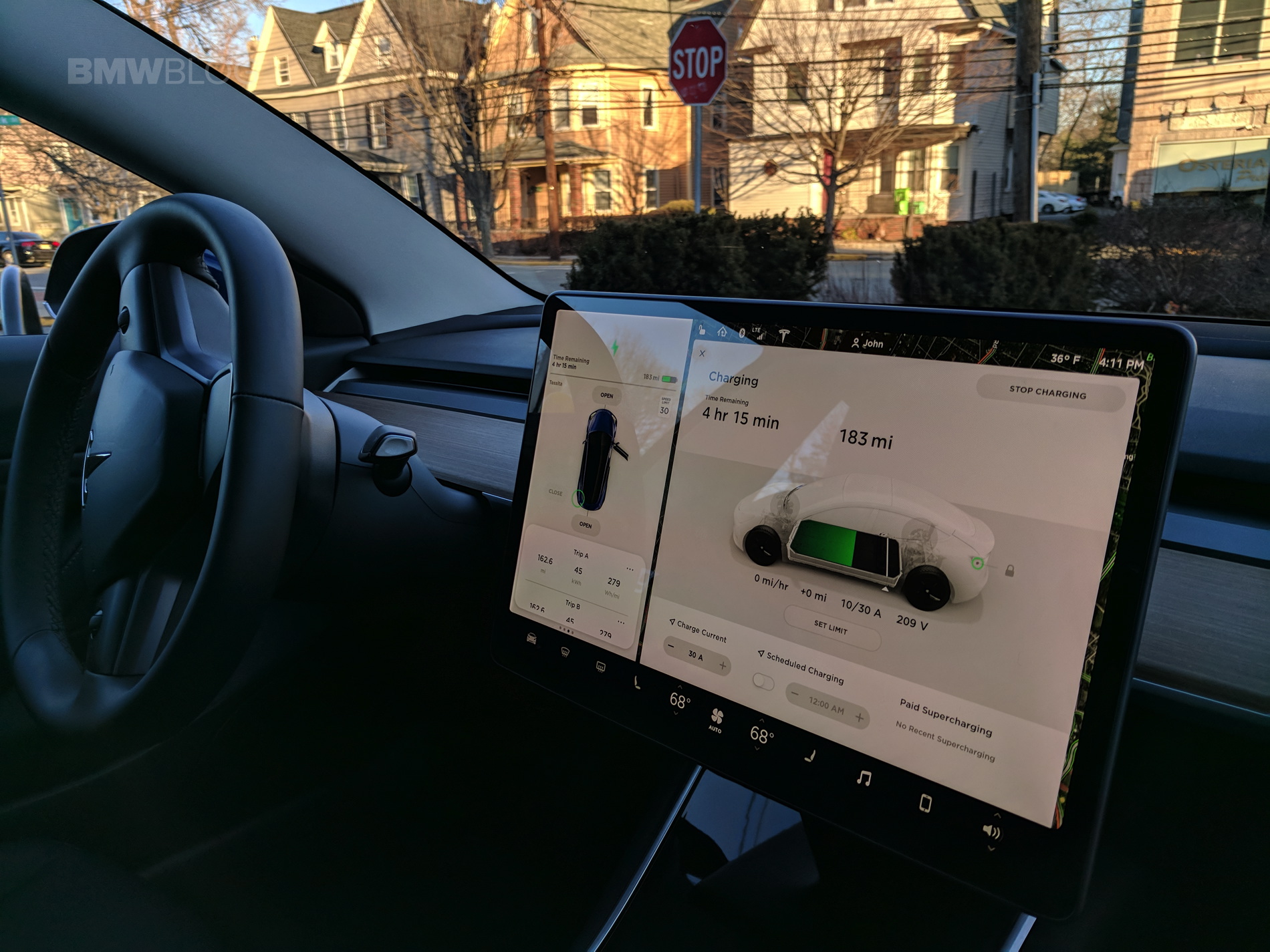 Which, by the way, is quicker than a BMW 330i, and I’m sure that wasn’t accidental since Tesla has stated that the Model 3 will target potential 3-Series customers.

Handling and Ride: One of the first things I noticed in my time behind the wheel was how solid and planted the car feels. The steering is direct and is just heavy enough. Tesla definitely got that right, in my opinion. I didn’t have the car on a track, but I was able to toss it around a bit on some curves and it performed like a true sports sedan should. 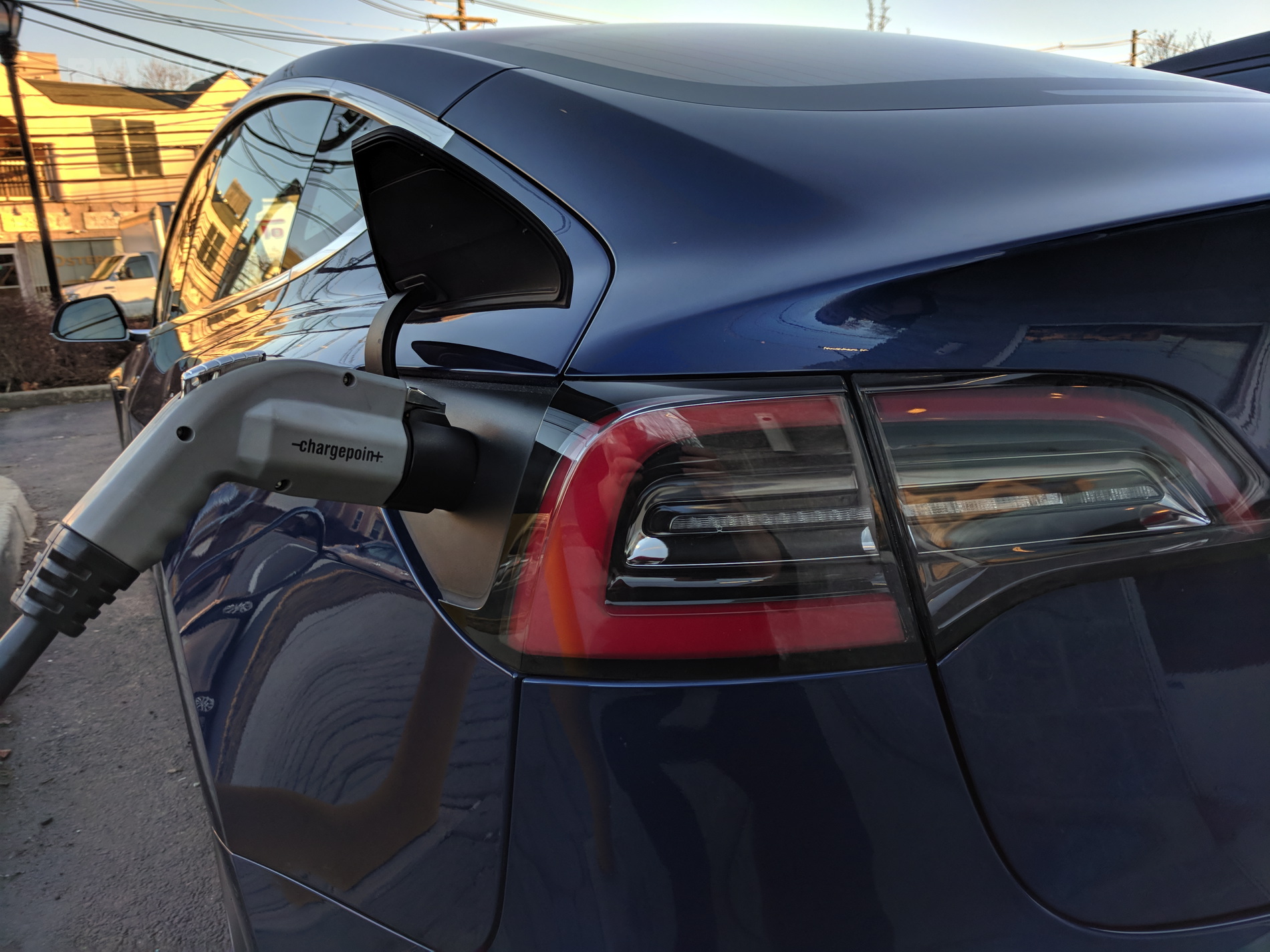 Tesla’s Charging Network: When having a frank discussion about electric vehicle adoption, the 800 lb gorilla in the room is always the need for plentiful, accessible, high-speed public charging to enable long distance travel.

Sure, there are other problems, like battery cost and energy density, but it’s pretty well accepted that these issues are rapidly being solved, and in the near future will no longer be an impediment. However, high speed public charging is still one issue the OEMs are trying to figure out.

Everybody except Tesla that is.

Tesla’s Supercharger network is now expanding at a rate of about twelve new stations per day. There are currently well over 1,000 locations worldwide, and nearly 10,000 individual stations. Using the Supercharger network, I can pretty much go anywhere I want to with ease.

That simply isn’t the case with any other electric vehicle made today. There aren’t nearly enough DC Fast charge locations that support the Combo or CHAdeMO protocol. To make matters worse most locations have only one station so if it’s in use or broken you’re out of luck. Tesla locations have six to twelve stations on average, and since Tesla owns and operates the network they keep them up and running all of the time.

OTA Software Updates: This is one thing that current Tesla owners love. They wake up one day and there’s a message in the car that overnight the system updated and fixed a problem, or added a feature that wasn’t previously available. Model 3 owners have already had a few updates. I had to bring my previous i3 to my BMW dealer a couple times for software updates. I would have much preferred having it done automatically while I slept. 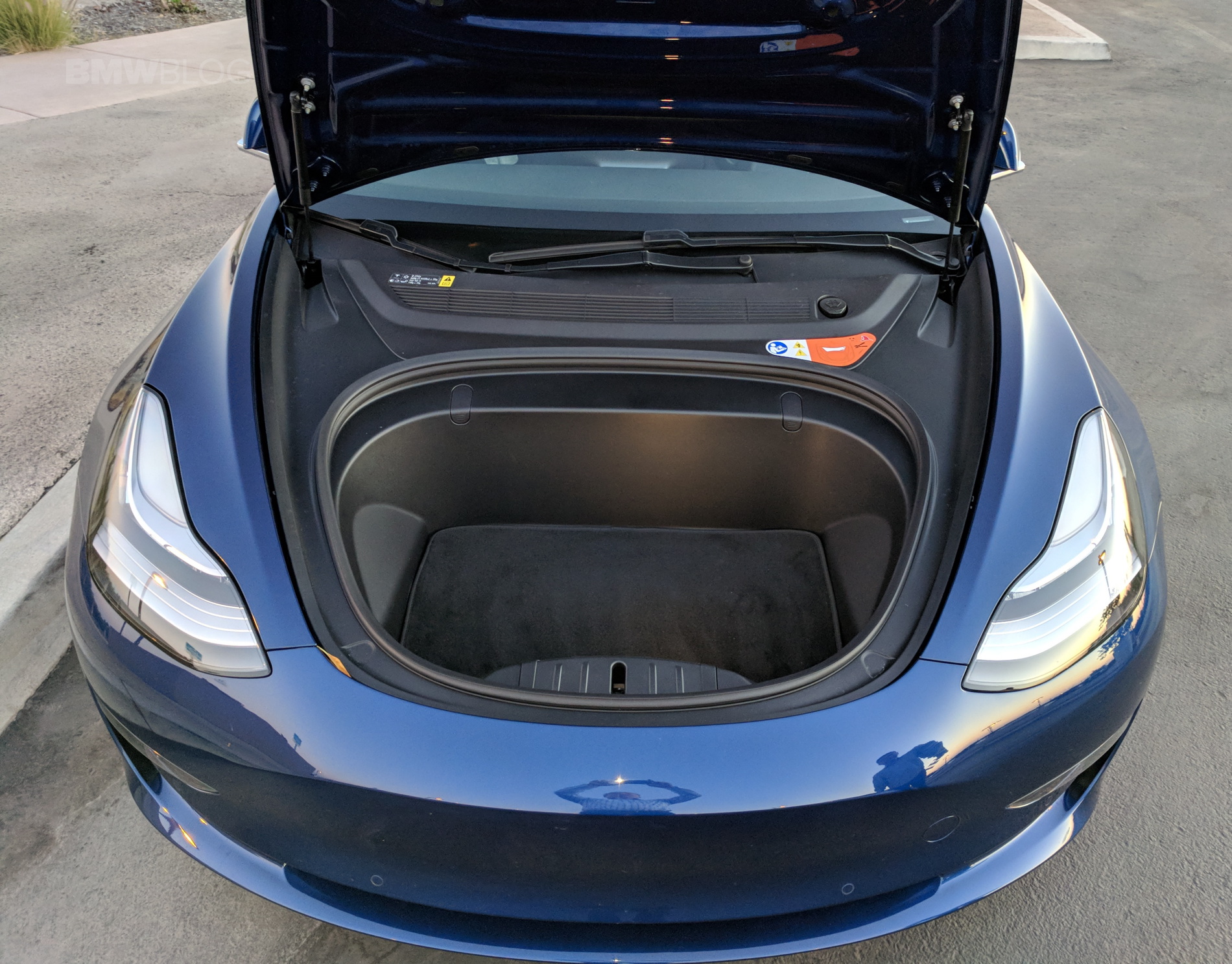 The Wait: With a more established OEM like BMW, for all but their rarest cars, you can pretty much get whatever car you want within a month or two of ordering it. I’m now on month 23 of waiting since I placed my Model 3 deposit and I still have no idea when I’ll get my car.

Sure, Tesla estimates my turn will come in two to four months, but that’s already been pushed back twice, so I really have no reason to believe that it won’t be delayed again. But this isn’t new for Tesla. They’ve had launch problems for all three of the previous cars that they’ve sold (Roadster, Model S & Model X). At some point Tesla will have to grow up and start acting like a real car company and execute a proper vehicle launch.

To make matters worse, the rear window defroster elements are thicker than I’ve seen an any other car. What’s odd about that is reports from early Model 3 owners seem to indicate that the rear defrosters take unusually long to work. I would think that such thick defroster elements would work better, but it appears that isn’t the case.

Fit and Finish: This is one area where Tesla still has a lot of catching up to do. The body panel alignment on the car I drove was pretty good, with only a couple minor exceptions.

However, I’ve now seen five more Model 3s on the road and on each one of them I have found a few more egregious misalignments. This is the one reason I’m not upset that Tesla keeps pushing back my delivery estimate. I figure the longer they take, the more initial manufacturing issues they’ll have worked out by the time they make my car.

Center Screen Controls Everything: While I really loved the minimalistic approach to the interior, I sometimes think Tesla may have gone a little too far. For instance, you can turn on the windshield wipers for a quick single-swipe with the steering column left-side stalk, but only for that one quick swipe. If you want the wipers to stay on, you need to go to the center screen to activate them.

Also, you can activate the cruise control by pushing down the right-side stalk once (twice activates Autopilot) but it can only continue at the speed you were going at when you activated it. If you want to increase or decrease the cruise control speed, you need to do that on the center screen. It seems too distracting to do this while you’re driving, especially for the wipers which you’ll be activating when you already have reduced vision because of the rain. You can’t even open the glovebox without using the center screen.

I get why Tesla designed the car this way. It’s really setting up the car for car sharing and full autonomy where there will be very little need for human interaction. But that’s not here yet, and we still need to pilot the cars and have the features easily accessible. I’m hoping that once I get my Model 3, and have more time behind the wheel that I will feel more comfortable with relying on the center screen.

The Model 3 is far from perfect. Tesla, as a company has a lot of issues to work out, and I’m sure they will continue to experience growing pains for the foreseeable future. That said, the Model 3 is still a special car worth waiting for. The Long Range version has more than 300 miles of range, can seat five passengers comfortably, drives like a true sports sedan, outperforms nearly all of the competition in its class and looks great. It has access to thousands of rapid charging stations which can add about 170 miles of range in 30 minutes, enabling long distance travel with minimal inconvenience.

How much of this market the Model 3 takes from the competition remains to be seen. That said, none of legacy OEMs have ever had 450,000 people plunk down a deposit on a car that they have never seen or driven, don’t know when they’ll get it or how much it will cost.

BMW recently disclosed their future electrification plans which is based on their new flexible vehicle architecture. This new architecture, starting in 2020 will allow BMW to make all future models available in ICE, plug-in hybrid and all electric, giving the customer the choice of which version they prefer.

That’s BMW’s electrification plan; offer all new cars in all variations. Some have argued that this path ensures that none of the versions will be optimized for the powertrain they have. Since the flexible architecture has to accommodate three different types of powertrains, all versions will have some compromises baked into the design.

Mike Tyson one said that all of his opponents have a plan, until they get punched in the face. The Model 3 is going to be a punch to the face of BMW and the other legacy automakers once Tesla works out their initial manufacturing issues and starts to deliver thousands of copies every week. It’s going to be really interesting to see who gets up and brings real electric competition to market, and who becomes a has-been.