I remember driving the BMW i3 for the very first time. Like a child, I saw the opportunity to take an extended weekend test drive for the BMW i3, which was for potential customers only, and called my local dealer. Was I a potential customer? Absolutely not. I couldn’t afford to insure the i3, never mind own it. Still, the dealer was willing to let me borrow it anyway and I’m still not certain why.

Setting off in the i3 for the first time was an incredibly odd experience. For starters, I felt that at any moment, someone was going to come running out from the dealership to demand the car back, as they realized I was just an idiot who couldn’t afford their car but just wanted to play around with it. So there were some nerves there. But then I started to actually feel the car, its odd electric drivetrain and hilarious interior. 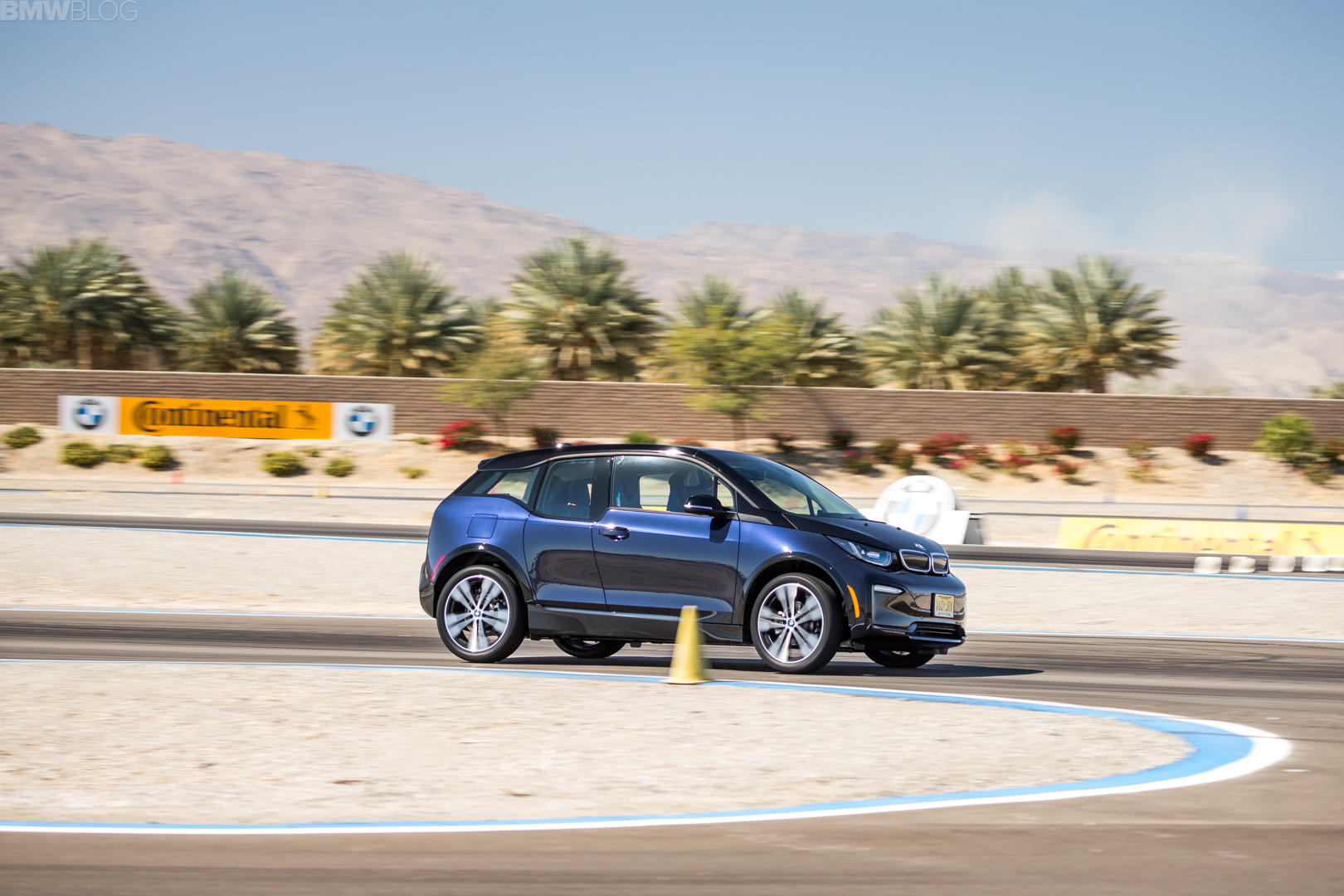 Never before had I ever driven a purely electric car, so its throttle response was foreign to me. There was no creep like you’d get in a standard car with an automatic transmission and then there was this instant rush of torque from the electric motor. All while being completely silent. Then I had to learn how to use the i3’s one-pedal driving, as there’s so much regenerative braking that you almost never have to use the actual brake pedal. It was a remarkable experience and one I’ll never forget.

The reason I’m telling you this story is because from the first time I set off in an i3, I’ve loved it. It’s such an oddball of a car; from its looks to its strange interior to the way it drives. And it’s fantastic fun. I know that’s not a popular opinion among car enthusiasts but it really is a blast to drive. Its punchy little electric motor, coupled with rear-wheel drive, a short wheelbase and sharp steering all combine to make the i3 a surprisingly fun little car.

So when I recently had the opportunity to drive the brand-new BMW i3s, the new sporty version of the i3, on an autocross course at BMW’s Performance Driving Center West, I was very excited.

What is the BMW i3s? 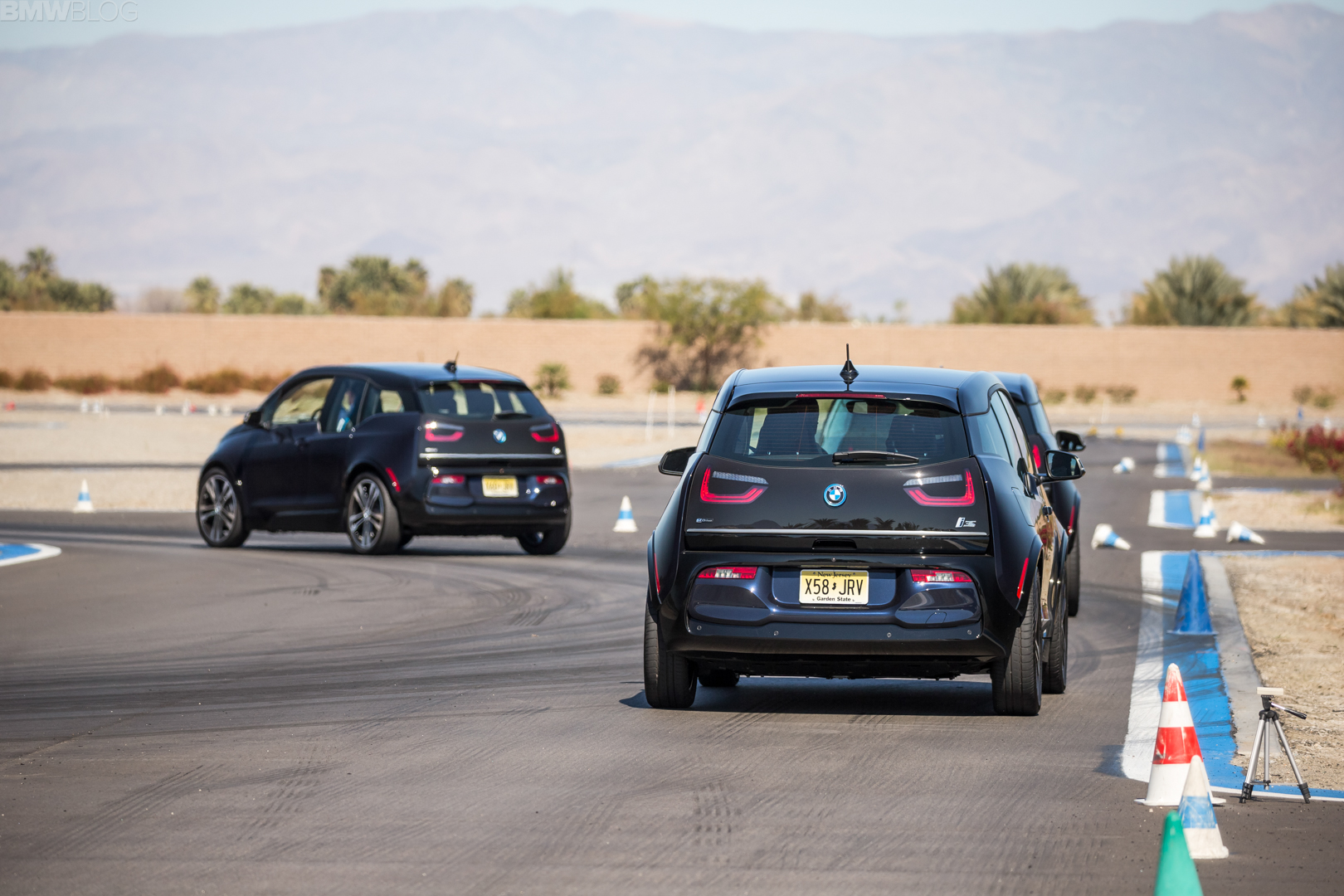 If you already know what the i3s is, you can skip this part an shoot right down to the autocross bit. If you don’t pull up a chair.

One the outside, it’s a touch different looking from the standard, newly-facelifted BMW i3. It gets some new black trim pieces, to make it look sportier, as well as a wider wheeltrack. That not only makes it look more squat and ready to rumble, but actually makes it handle better as well. Its suspension has also been lowered 10mm, so it’s actually significantly more agile and more fun to drive than the standard car.

The BMW i3s also sits on 20″ wheels, rather than the standard car’s 19″ wheels. On a normal car, that wouldn’t be a big deal. However, considering how skinny the i3s’ tires are, the extra inch in height actually adds a decent amount of useful contact patch to the road. So there’s more grip now.

It wouldn’t be a sporty BMW variant without some extra power, right? Well get ready for a whopping 14 extra horsepowers, for a total of 184 hp. It also gets a bit more torque, so it now makes 199 lb-ft. These aren’t monster numbers but in a car that only weighs 3,005 lbs and is made mostly from carbon fiber, it’s enough power.

BMW claims a 0-60 mph time of 6.8 seconds and that seems entirely believable. Again, these aren’t numbers that will light your hair on fire but, in such a small, hilarious car, it’s more than fast enough. Plus, thanks to its instant electric torque, it’s one of the fastest 0-30 mph cars on the road. It can shoot gaps in traffic as if it teleports.

So now that you know what the BMW i3s is, it’s time to take it for a spin. Or, at least tell you about how I took it for a spin… 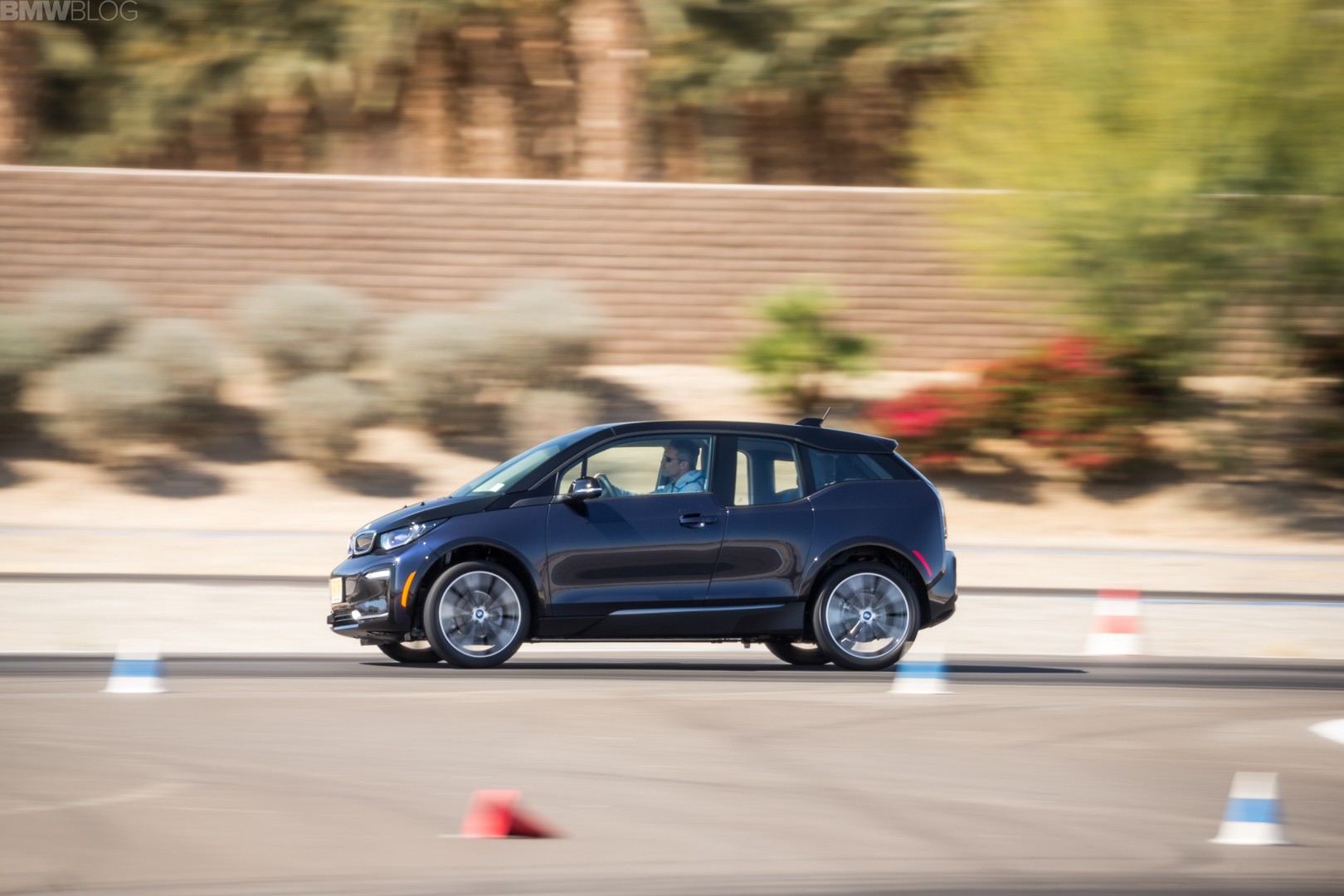 At BMW’s recent Test Fest, the BMW i3s was on hand to drive, among some other cars like the BMW M5 and X2. Though, the i3s was a bit unique in that we were allowed to sample it on a timed autocross course and journalists were competing against each other. I had driven that very autocross course before, only it was in a BMW M235i. I remember it being fun but, because it’s such a small course, it’s tricky. One small mistake can cost you a significant amount of time.

We’re talking laps of around 30 seconds, give or take one or two, so if you mess up by one tenth, it’s likely over. And all automotive journalists like to think they’re awesome on a track, so there was a lot of chest pounding going on, which is the more appropriate term for it.

The course is small, features a ton of tight, twisty turns, one long sweeping turn, a quick little chicane at the end and then a stop box, where you have to try and stop the car in. BMW also had training wheels on for us, as there were cones marking our turn-in and apex points. Typical press-day stuff. While most of us don’t need those markers, they’re nice to have.

Before we started, we were all talking with BMW employees about what the i3s is like to drive on the little track. They were all raving about it, saying its tiny wheelbase and instant torque make it a blast for the little course. “Yea, yea.” I thought. “The i3 is good but it can’t be as good as they’re saying”. I was wrong. On a tight, twisty little autocross course, the BMW i3s is an absolute blast. 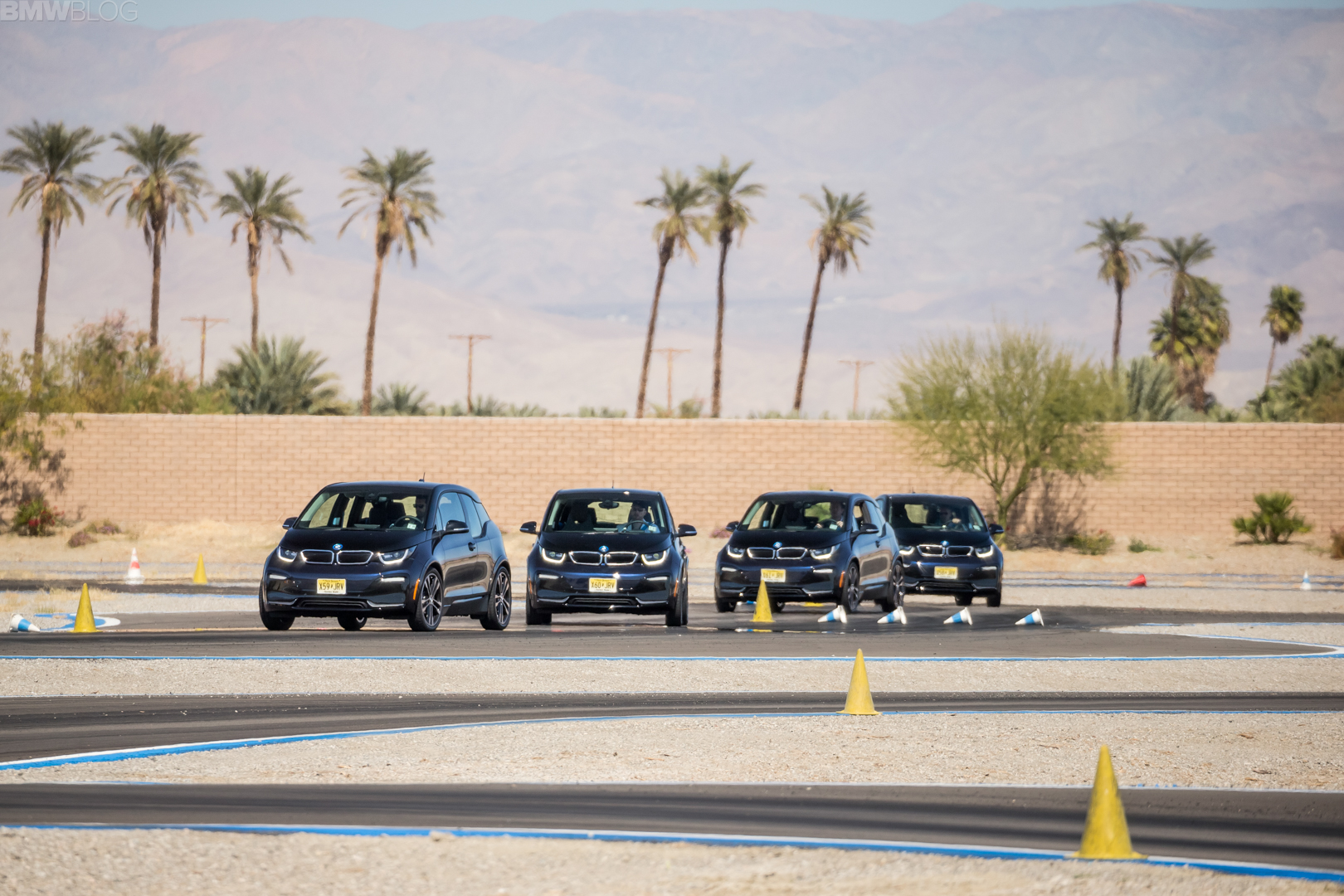 Off the line, it takes off surprisingly quick and the first corner of the course is a left hander about one second after the start line, so it was a bit unnerving how quickly it approached in the i3. I turn in for the first corner and the front end bites surprisingly well. That was followed by an almost immediate right hander and then another super quick left. I don’t know if there’s a BMW on the market that could handle that quick left, right, left better than the i3s. It’s so small, so light and so punchy that it makes such easy work of it.

Through my first lap, I’m loving it but still trying to get the hang of the car and remember the track. So I stop in the box with a 30.4-second time. Not great. Wasn’t the slowest of the bunch but it’s not great. I knew I could do better.

So I line up for my second lap, visualizing in my head where I’m going to improve. I knew there were a couple of corners where I could be a little bit quicker and I had some understeer on one turn. Off I go again, though, and I’m hitting the corners mostly as I want. However, I still get understeer toward the end and I stop in the box with a 29.7-second time. Improvement, but not where I wanted to be. Us journos are a competitive bunch, so there’s much ribbing as we line up again.

Again, I knew where I wanted to improve as I waited my turn to go for my third and final lap. This time, I’m feeling the car well, I know the course well and I’m ready to go. So I take off and halfway through the course I can feel that this is my fastest lap. I understand the car more and I know I can lean on it harder than I previously was. It’s really quite surprising how well the i3s moves on a track. Then, I get to where I normally understeer and it happens again. “Aghhhhh” I yell. I messed up again, after such a good lap. I stop in the box with a 29.5-second time.

Afterward, I knew that if I had taken that turn better, I could have had a 28-second time. Considering that the fastest time of the day was in the 27-second range, I would have been happy with myself. Still, it was all in good fun and we all had a blast.

That was the most interesting part about this little autocross test, we all had fun. Ten years ago, if you had told any car enthusiast that there would be a little electric BMW hatchback with 184 hp that would be one of the most fun cars you could throw around a small track, they’d have laughed at you. Now, a bunch of car enthusiasts just had an absolute blast doing just that. It’s an odd world we now live in.

Sensible Urban Fun isn’t exactly the most exciting sounding thing in the world, is it? However, that’s what the BMW i3s is. If you live in a dense urban area, or even the suburbs and don’t have a commute, the BMW i3s is a great little car to own. It’s fully electric (there’s a Range Extender model but it’s still solely electrically powered), sensible on both your wallet and the planet, is incredibly easy to park and has almost no maintenance.

That’s the sensible part. What’s great is that it’s also fun. Its punchy little electric motor, rear-wheel drive, fantastic weight distribution, balance and chassis dynamics all combine to make a very entertaining car to drive. Plus it’s funky looking, has the most unique interior on the market and is surprisingly luxurious.

I always knew the BMW i3 was a lot of fun. But taking it to an autocross track really made me realize just how much fun it could be.

Previous articleWhat is the difference between the BMW i3 and the BMW i3s?
Next articleBMW i Hydrogen NEXT arriving in 2022 with 368 horsepower