The Porsche Taycan lineup is about to expand with the addition of a new member. Teased in a shadowy image alongside the 4S, Turbo, and Turbo S models is a new mysterious variant of the all-electric sedan from Zuffenhausen. In a post on social media, Porsche remains tight-lipped about the model’s identity for now, only saying: “Welcoming a new addition to the family. Stay tuned.”

What could it be? We have an idea. At the end of June 2020, Porsche introduced a rear-wheel-drive Taycan in China to serve as the base model with a lower price tag. There’s a pretty good chance the company will be expanding the RWD model’s availability in other parts of the world, presumably in Europe and/or North America.

We strongly believe this is the version teased in the adjacent image as it appears to have the same rose pink finish used as the launch color last year for the two-wheel-drive Taycan in the People’s Republic. Surely that can’t be just a simple coincidence, right? Chances are it’s a subtle hint the more attainable zero-emissions sports sedan will become a global model later this year.

As far as the technical specifications are concerned, the RWD Taycan sold in China can be had with a choice between a standard 79.2-kWh battery or a larger 93.4-kWh Performance Battery Plus offered as an option. The standard variant offers 408 horsepower (300 kilowatts) while the beefier derivative ups the power ante to 476 horsepower (350 kilowatts). Both output numbers are available when the overboost and launch control modes are activated. 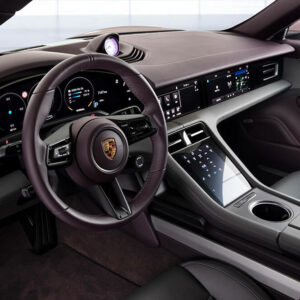 The sprint from 0 to 62 mph (100 km/h) takes as little as 5.4 seconds, which isn’t too shabby for an entry-level trim level. Both flavors of the tail-happy Taycan top out at 143 mph (230 km/h). The maximum range stands at 257 miles (414 kilometers) for the base model and 304 miles (489 kilometers) for the version equipped with the larger battery, with both ranges calculated according to the NEDC test cycle.

It’s too soon to say how much it will cost, but we’ll remind you the Taycan 4S retails from €106,487 in domestic market Germany and from $103,800 in the United States. It is probably safe to assume the pricing will drop below six figures.