Awhile back, Audi showed off an electric crossover concept that would slot underneath the e-tron SUV and act as the brand’s entry-level EV — the Q4 e-tron. Now, it’s unveiled a new concept electric car, a sportier looking version of the same car, called the Audi Q4 Sportback e-tron Concept. I know, it’s a mouthful.

The name but be absurd but its specs aren’t and the Q4 Sportback e-tron is going to be a car that helps launch the Audi brand into the electric mainstream. Essentially, the Q4 Sportback is going to be the “Coupe” version of the standard Q4 e-tron, as it will have a more aggressive roofline and sportier exterior touches. However, the rest of the car will be almost identical to its more traditional looking sibling. 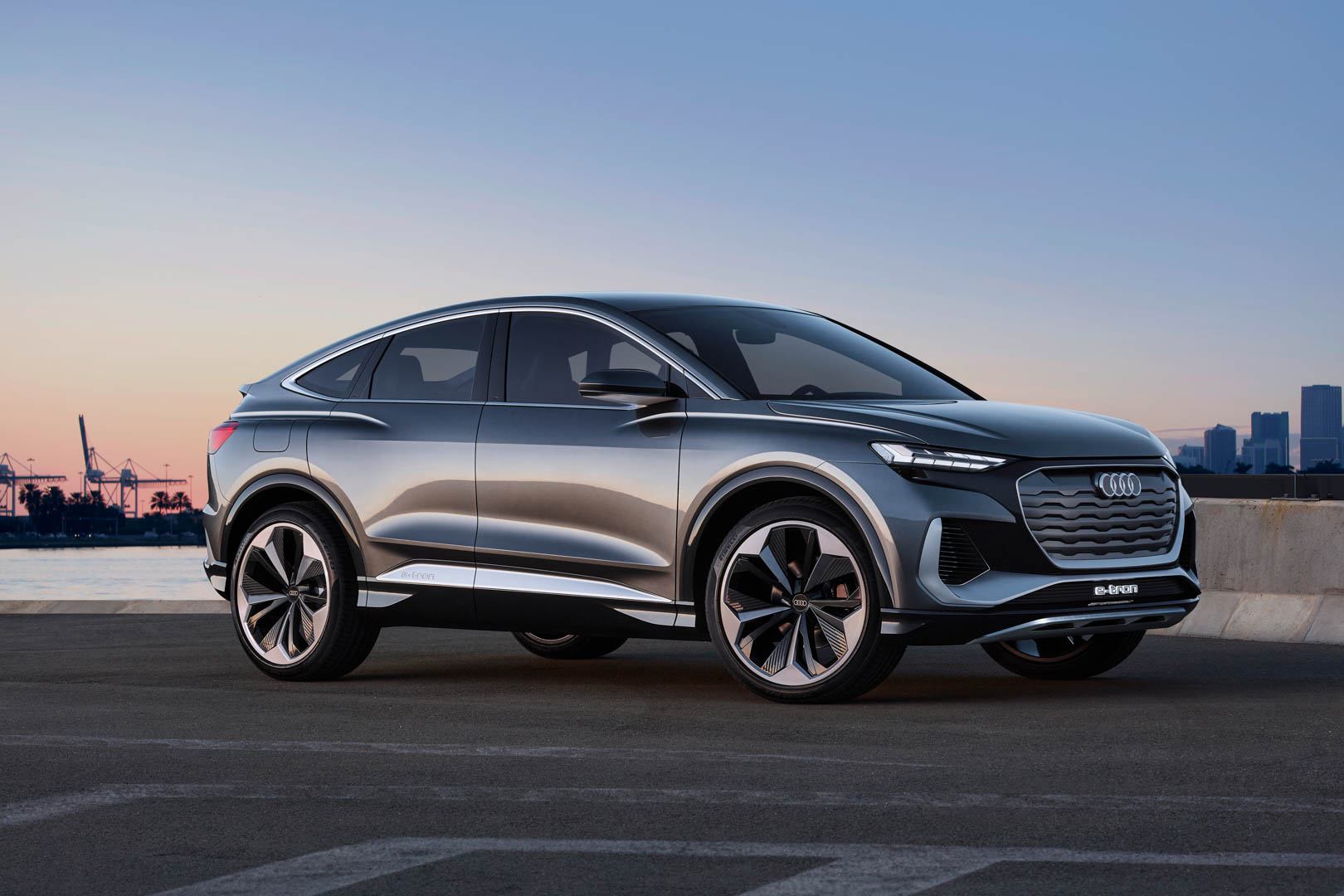 This new Audi Q4 Sportback e-tron, along with its standard Q4 e-tron sibling, will come with two electric motors; one at each axle, that will combine for 225 kW (301 horsepower) and send power to all four wheels. According to Audi, 0-62 mph will happen in 6.3 seconds, which is enough to be fun in the right circumstances but not exactly impressive.

What is impressive about the Audi Q4 Sportback e-tron is its range. Thanks to its 82 kWh battery pack, the Q4 Sportback will be capable of 450 km (279 miles) of range. While that’s not any better than many older Teslas, there will be a rear-wheel drive version of this car that packs a 310 mile range. You heard that right, there will be a rear-wheel drive version. Both range ratings are according to the WLTP, which is a bit more lenient that the US.

Get used to specs like that from Audi. According to the Q4’s press release, it will be an “advanced look at what will already be the seventh series production electric vehicle that the manufacturer will offer by 2021.” If you’re wondering what the other six e-tron vehicles are, the list is as follows: Audi e-tron, e-tron Sportback, e-tron S, e-tron Sportback S, e-tron GT, Q4 e-tron and Q4 Sportback e-tron. 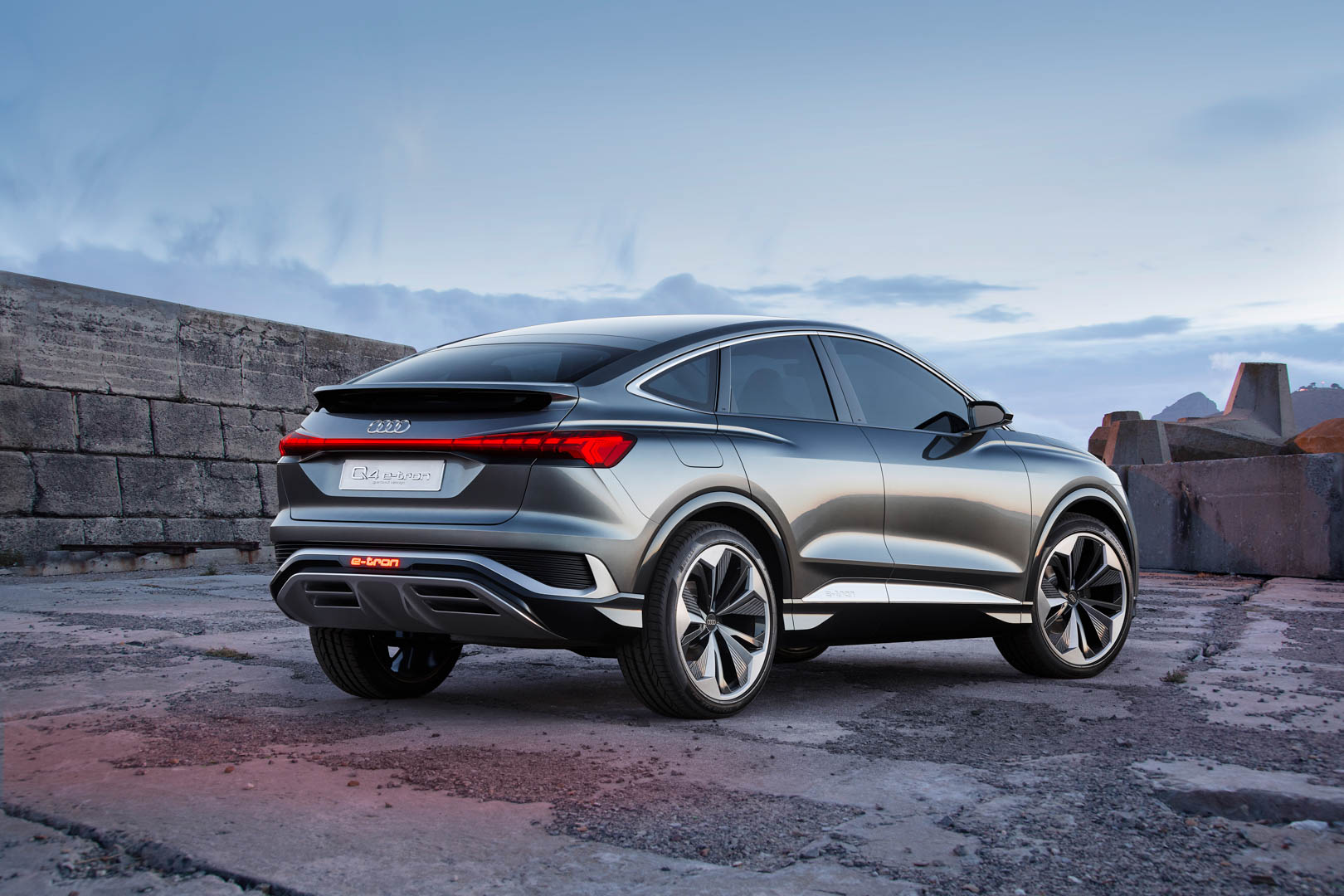 The Audi Q4 and Q4 Sportback e-trons will be the first Audi EVs build on the new MEB architecture, which is the Volkswagen Group’s all-electric, modular platform. It’s the same one that will underpin the Volkswagen I.D. series of EVs. You can see the benefits of that just from its specs.

Because the Audi Q4 Sportback e-tron, and its normal-roofed sibling, will be built on an architecture that’s solely designed for EVs, its weight will be reasonable for its size. While the current crop of e-tron SUVs is built on a modified version of the Audi Q7’s chassis, which makes them very, very heavy. The Q4 e-tron will have a smaller battery pack — 82 kWh versus the current e-tron’s 95 kWh — yet will offer around the same range and a similar 0-62 mph time.

Its new underpinnings are clear from the looks of it. The Audi Q4 Sportback e-tron Concept doesn’t share the same proportions as the current e-tron Sportback. This new car is shorter, stubbier and chunkier. Its wheel arches are flared more and it even seems to have a more aggressively-raked roofline.

What’s interesting is that it looks like a production car, despite it actually being a concept. Audi has had a knack for doing that with its e-tron concepts, giving them essentially production-ready designs and changing very little to make them road legal. For instance, the Q4 Sportback Concept looks like it could hit the road right now, as its front end looks like it would meet all current crash regulations, its proportions seem normal, its headlights and taillights look perfectly acceptable for road use and it even has normal side mirrors. It just needs door handles and it’s road-ready.

This is smart by Audi because it allows the brand to offer road cars that look just like the exciting production cars so many fans saw in pictures and at auto shows (remember those?).

Inside the Audi Q4 Sportback e-tron, you’ll see a cabin with a shape similar to the e-tron GT Concept, with the same steering wheel, virtual cockpit and infotainment screen tilted toward the driver. It also gets the same sort of light gray/white color scheme, which gives it an airy, more spacious look. It’s also made from sustainable materials, such as white and beige microfiber textiles.

The new head-up display now features augmented reality, which can display important information to the driver onto the windshield, making it seem as if the graphics are on the road ahead. For instance, it can display arrows for turning, based on the navigation system, on the road. It’s similar to the system used in some new Mercedes-Benz products, except those are shown on the navigation screen, while this is displayed, seemingly, on the road ahead of the driver.

Touch sensitive controls on the steering wheel can control all of the functions for the augmented reality system, so the driver truly never has to take their eyes off of the road.

There’s a curious element of the interior that’s piqued my interest, however. On the driver’s side door panel, there seems to be a touch-sensitive controller of some kind. Might it be some sort of handwriting device, so drivers can still use the same handwriting tech used in current Audis?

On the MMI screen in these photos, you can see an icon labeled “User Profile”, which uses an image of a fingerprint. So might it be a fingerprint scanner to store different profiles for different drivers? Might it be some sort of dead-man’s switch for the autonomous driving functions, so the driver doesn’t have to hold the steering wheel to keep them engaged? Now we’re speculating too wildly but we are intrigued.

What’s even more intriguing is how the Audi e-tron might handle. With this new all-electric architecture, the Audi Q4 Sportback e-tron is said to have perfect 50:50 weight distribution, front-to-rear. It gets MacPherson front struts with a multi-link rear suspension setup, not dissimilar to a BMWs, and adaptive dampers.

The Q4 Sportback e-tron will come in two flavors; single-motor/ rear-wheel drive and dual-motor/all-wheel drive. Even in the dual-motor model, though, it will drive primarily its rear wheels for efficiency purposes. So it will not only have a 50:50 weight distribution but it will also be mostly rear driven, so it should be more exciting to drive than any other electric Audi crossover. 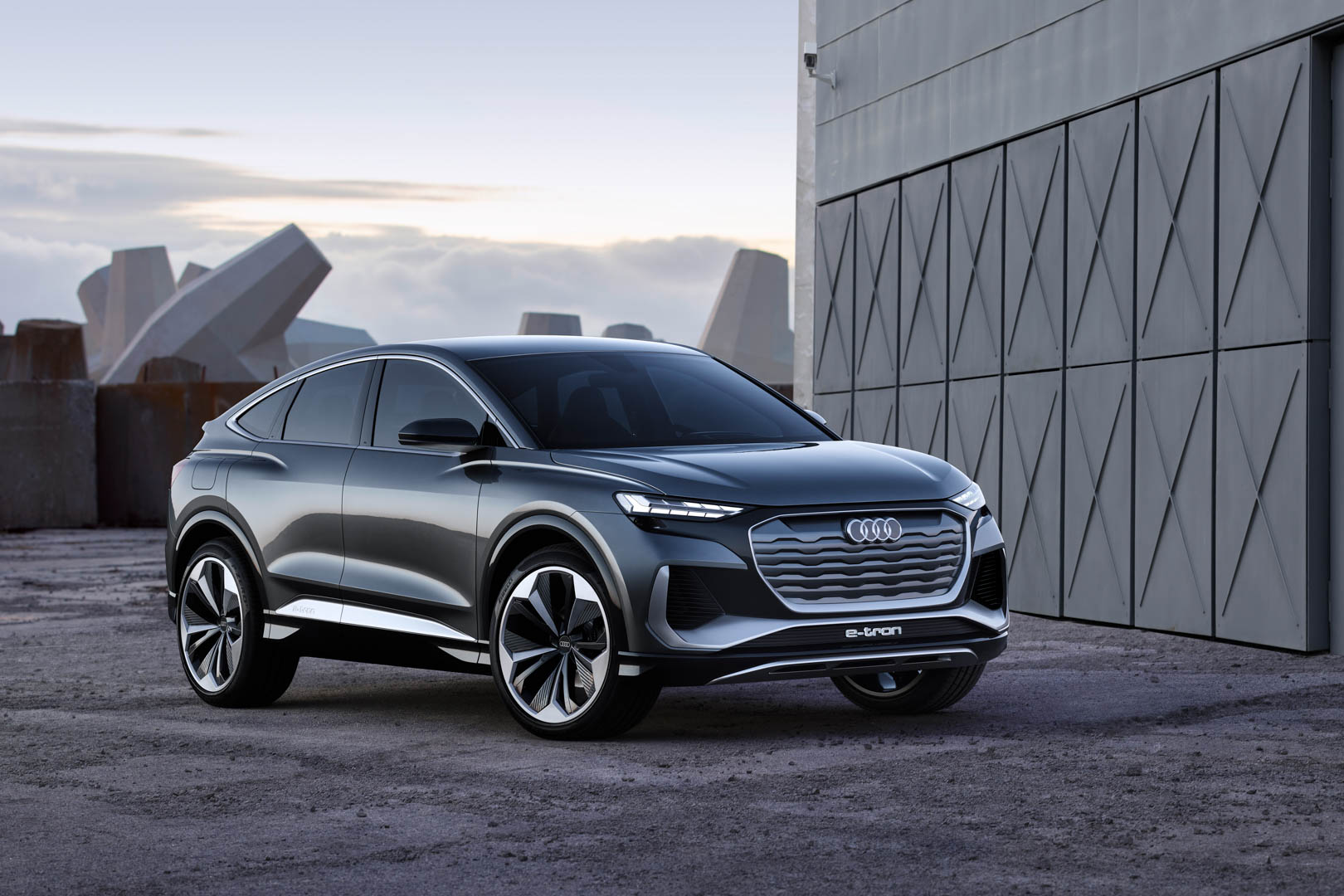 Additionally, the battery pack (which is admittedly very heavy, weighing in at a whopping 510 kilograms (1,124 lbs)) is very flat and located in the floor, in between the axles. So it has a very low center of gravity, similar to a traditional sedans, despite being a relatively tall vehicle. So even though it’s a crossover, it won’t handle like one.

So far, the Audi Q4 Sportback e-tron is shaping up to be the best Audi EV yet. Of course, the e-tron GT will be the most exciting Audi on the market and possibly the best looking but it will also likely carry a six-figure price tag.

The Audi Q4 Sportback e-tron, and its normally-shaped sibling, will carry a price tag many normal folks can afford. So it will provide all-electric driving, great range, great tech, rear-biased handling and funky new styling at a price that will be realistic for most Audi customers. If any Audi EV is going to get its customers to jump from internal combustion to electrification, this is it.