It would appear Jaguar is looking to expand its SUV lineup beyond the current three-model portfolio consisting of the compact E-Pace, midsize F-Pace, and the fully electric I-Pace. British magazine Auto Express has it on good authority the fourth member of the “Pace” lineup will be the biggest of them all and ride on the same MLA platform as the next-generation XJ sedan.

The J-Pace apparently has the Tesla Model X in the crosshairs and could be offered with batteries as large as 100-kWh packs. Lesser versions of the electric SUV will have smaller batteries to drive down the asking price. Technical specifications are still pretty much shrouded in mystery, but as Auto Express points out, Jaguar is likely targeting a range between charges of at least 300 miles (483 kilometers) if it wants to realistically compete with Tesla. 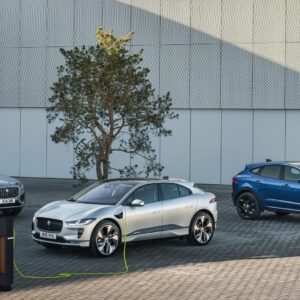 Interestingly, the Tata Motors-owned marque is reportedly interested in selling the J-Pace exclusively with an electric powertrain. Even though the platform has been engineered to support gasoline, diesel, and plug-in hybrid hardware, Jaguar’s flagship SUV is expected to do away with the combustion engine altogether.

It would be a bold move on Jag’s part to sell an electric-only J-Pace, thus accentuating JLR’s eco-friendly agenda. As a matter of fact, Auto Express has it on good authority Jaguar Land Rover CEO Theirry Bolloré has set his sights on turning Jaguar into a pure EV brand to rival Tesla and newcomer Polestar. It could also mean the XJ fullsize luxury sedan will lose the ICE, although previous reports have stated about keeping the gasoline power alive for the big cat.

The J-Pace has apparently been green-lighted for production and will be put together at the company’s Castle Bromwich plant in the United Kingdom as part of a billion-pound investment JLR has made in electrification to prepare for a greener future. The report doesn’t say when the wraps will come off, but it’s likely at least a couple of years away seeing as how the next-gen XJ hasn’t even been revealed yet.

The J-Pace is not the only newcomer Tesla has to worry about seeing as how BMW just unveiled the iX and Mercedes is planning EQE and EQS SUVs for 2022. When Jaguar will upsize its electric SUV offering in the following years, expect it to cost more than the $69,850 it wants in the United States for a base I-Pace.