BMW’s hottest electric car – the i4 M50 – heads to the Autobahm for a few hard launches followed by a top speed run. It had the optional IconicSounds Electric function co-developed with four-time Grammy winner Hans Zimmer. Of course, the sounds are artificial and many prefer the totally silent experience, but we can all agree BMW has created some of the most interesting EV noises.

The performance numbers back up the futuristic soundtrack as the i4 M50 did 0 to 62 mph (100 km/h) in 3.72 seconds, thus notably beating the 3.9-second time quoted by the German automaker. Perhaps more impressive is the sprint from 62 to 124 mph (100 to 200 km/h), which took approximately eight and a half seconds. EVs tend to run out of puff at higher speeds, but BMW’s zero-emissions 4 Series Gran Coupe has pulling power for a longer time. 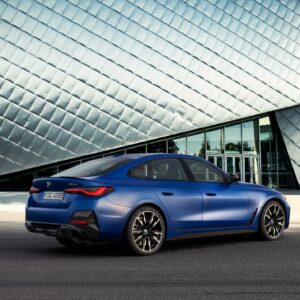 The 141 mph (227 km/h) top speed is nothing to write home about and is on par with the electronically limited 140 mph (225 km/h) mentioned by the Bavarian brand in the specs sheet. Numbers aside, those who have driven the i4 M50 praised its handling despite its extra bulk compared to an M3 Sedan or an ALPINA B3. With continuous advancements made in battery tech by improving energy density, future EVs could shed some weight for better performance and efficiency.

See also  You can now configure the BMW i4 online

A true electric M is unlikely to arrive before 2025 when the Neue Klasse will debut. BMW might have teased a sports car without a combustion engine in a recent presentation to journalists, but even if it’s coming, don’t expect to see it anytime soon.