It’s been a long time coming but it’s finally here. The BMW iX, the car that’s supposed to be BMW’s flagship electric vehicle, has finally been revealed. Now that it’s here, it’s tie to compare its styling to its closest competitors.

The car that will most often be compared to the BMW iX is likely going to be the Tesla Model Y. Despite being quite a bit cheaper, the Model Y is similar in size, built on a pure EV platform and is available with similar power and range. But the important question for most customers is: which is better looking?

Up front, the BMW iX is interesting in that it still has a signature BMW kidney grille except it’s not really a grille at all. It’s mostly a housing for sensors, to be honest. Still, the design is there. What’s a bit frustrating about the fake grille is that it still sports the new 4 Series-esque design, even when it doesn’t need to. Compared to the Tesla Model Y, which doesn’t have a grille at all, the massive kidney grille design seems superfluous. On the flip side, the Model Y’s lack of grille at all makes it look overly bland. What puts the iX over the top, ahead of the Tesla, is its headlights design. The Model Y looks like a big bug, but the BMW iX is sleeker and more high-tech looking. 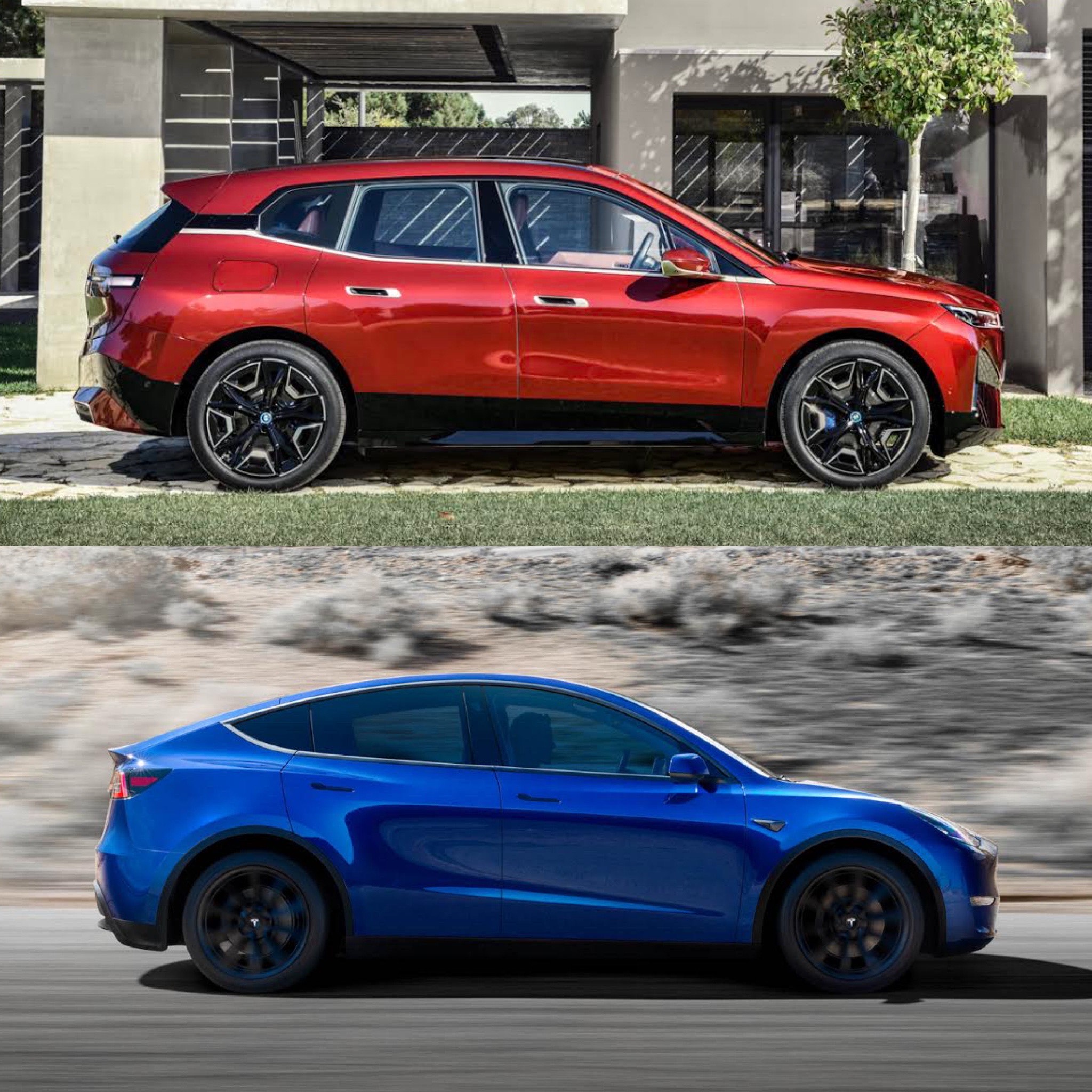 In profile, the BMW iX takes an easy win. The Model Y looks like a hunchbacked Model 3 and has about as much visual interest as a boiled egg. While the iX is a more traditionally-shaped crossover but does have some nice design touches. For instance, it gets an i3-esque floating d-pillar, squared-off fender flares and slick flush door handles. While the BMW iX isn’t a beautiful car in the traditional sense, it’s far more visually interesting than the Model Y.

Out back, neither car is particularly interesting but the BMW iX once again edges it out. Its hyper-slim taillights and roof spoiler give it some visual flare, with the former also lending a high-tech vibe. While the Model Y just has… well, taillights. There’s more style to a manila envelope. 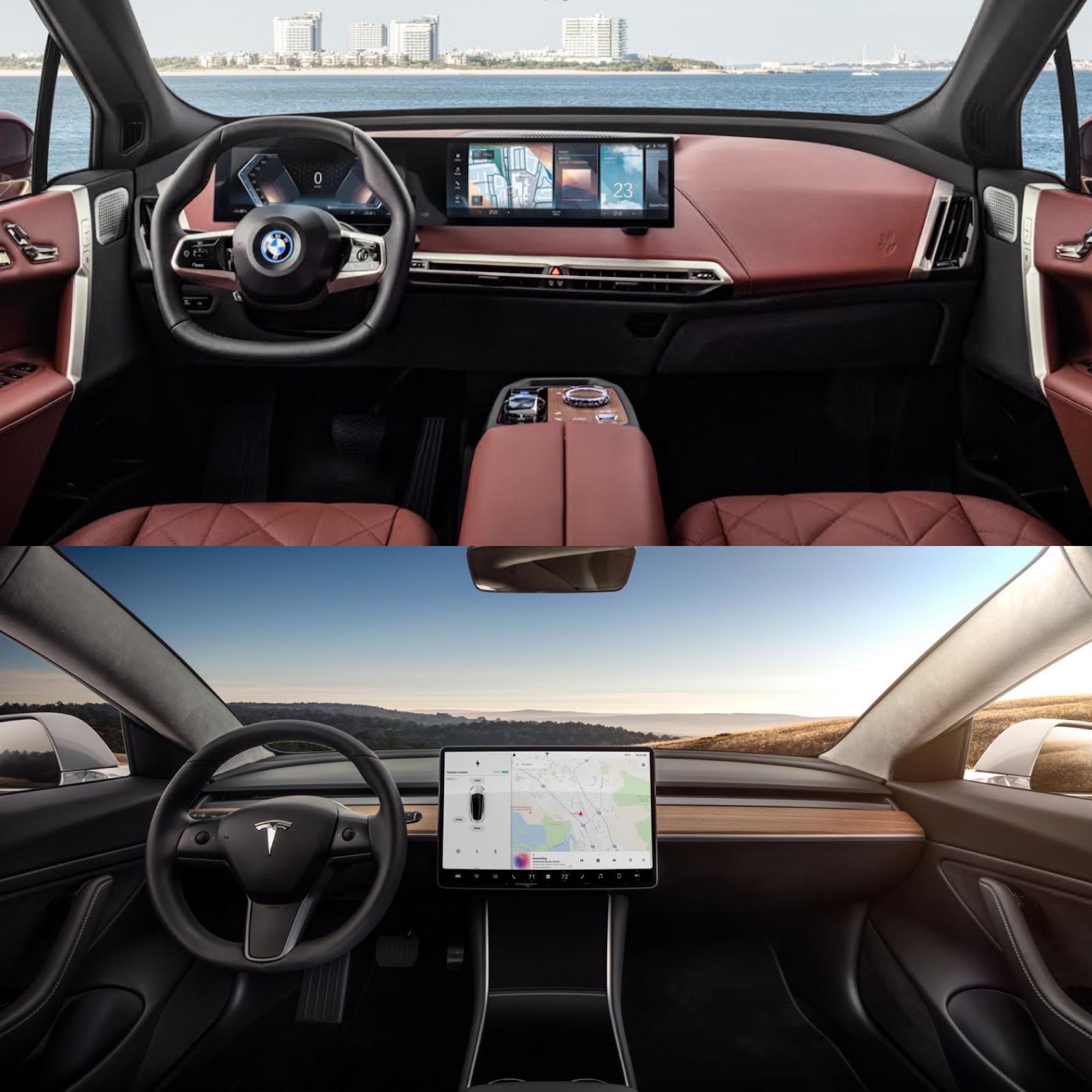 On the inside, both cars sport a simple, minimalist cabin but the Tesla Model Y takes minimalism to an extreme. It’s all straight lines, soft edges and just one gigantic, centrally-mounted screen for all of its driving information. The BMW iX, while still quite a simple design, does actually have some surprisingly nice touches. It has funky seats (quilted red leather in these photos), a cantilevered center console, glass elements on many of its buttons and switches, aluminum speaker grilles and even a hexagonal steering wheel. 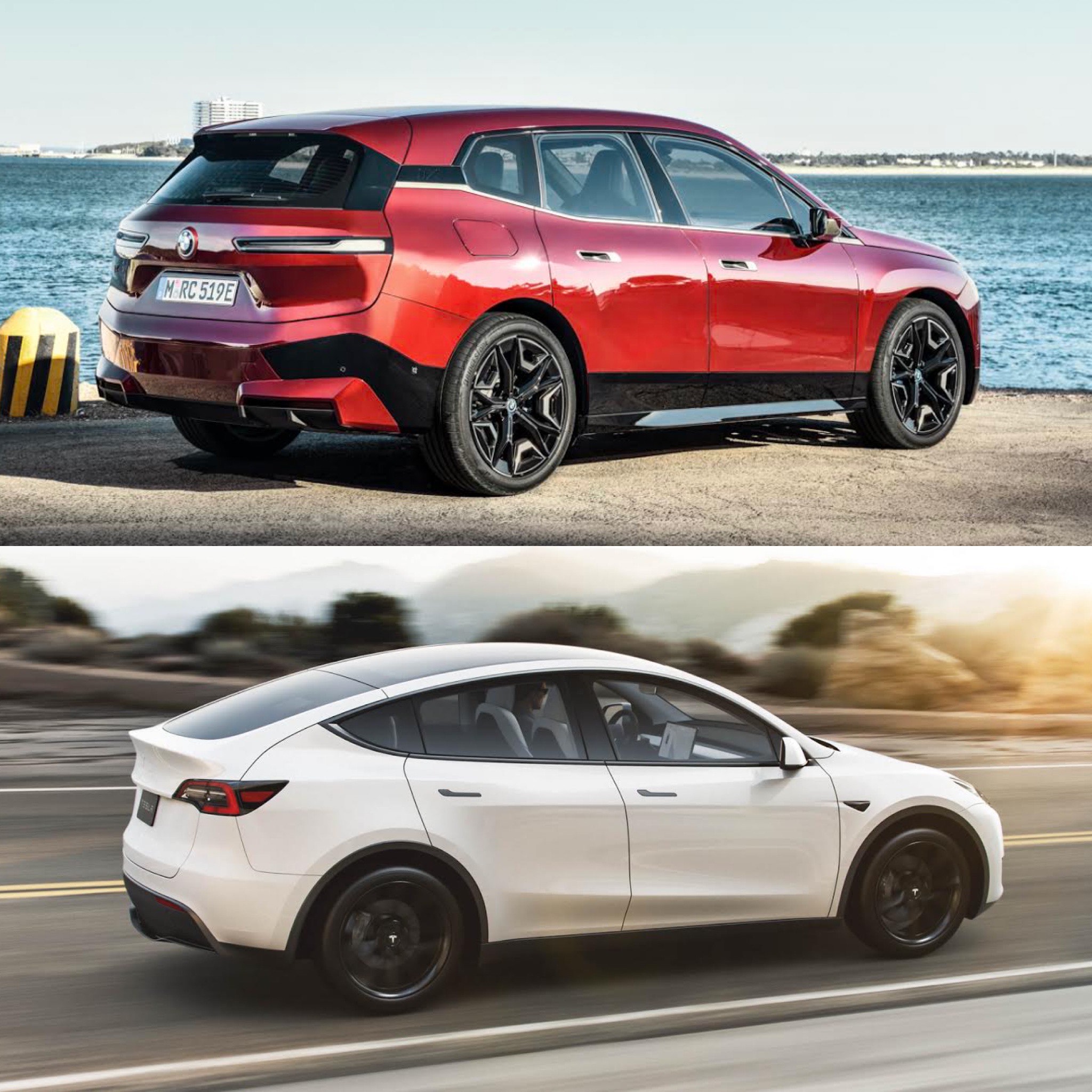 The BMW iX is not the prettiest car BMW has ever made but it’s also not supposed to be. The iX is designed to be funky and interesting, just as the BMW i3 was back in 2014. In that endeavor, BMW has succeeded. Which is why it beats out the milquetoast Tesla Model Y, in terms of styling. One might argue that the Model Y is the better EV but that’s a discussion for a different time, as we haven’t driven the iX just yet. However, in terms of pure style, the Bimmer takes an easy win here.