After years of painful awaiting, BMW has finally deployed the new iX electric flagship. Let’s see how the new technology flagship from Munich stacks up against one of its key contenders: the Audi e-tron quattro. BMW might be quite late to the EV party among the three German premium carmakers, but better late than never. The Ingolstadt rival launched its e-tron quattro in 2018, while Merc came up with the EQC the same year.

The new iX has some catching up to do and hopefully it will raise up expectations when it launches on the market in late 2021. At least for the time being, till we find out more exact details on the powertrain of the I20 model generation, we put together the iX and the e-tron quattro in a visual battle.

It is safe to say that Audi is the more classic of the two, while BMW came up with a brand new styling philosophy. The e-tron is instantly recognizable as belonging to the Four Rings, whereas the iX reimagines the kidneys once again. After the new 4 Series and M3/M4, the electric SAV is now introducing a new grille, with connected, tall and upright kidneys with a filled pattern hiding most of the sensors and radars for autonomous driving.

See also  Why Do the Audi e-tron GT and e-tron SUV Use Different EV Motors? 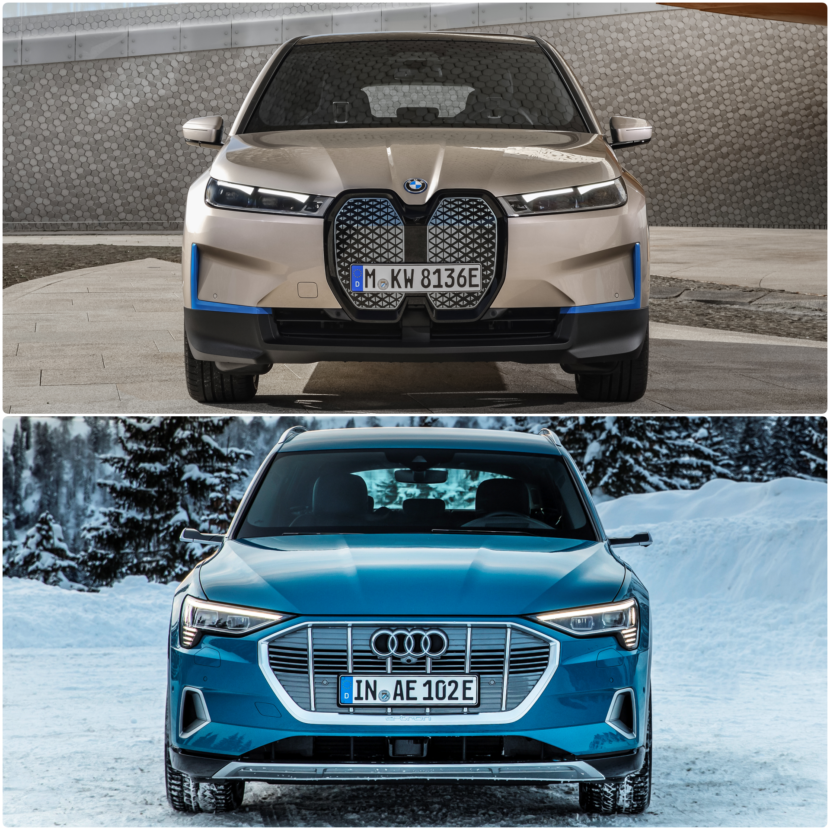 While the Audi e-tron quattro clearly has the more sophisticated and old-school design, the new BMW iX plays a different card, emphasizing instead a clean, functional and uncomplicated design, which definitely adds even more futurism and controversy to the whole car. The headlights are the thinnest ones on a series BMW to-date, also exhibiting a generous length and being connected to the grille.

Certainly, the iX needs some time to get used – I am yet to succeed in wholly accepting the front end design. It looks better in the Sport Package and with the BMW Individual Exterior Line Titanium Bronze accents and ornaments, which make it extravagant and posh. But, at least for me, the e-tron is the more refined and beautiful vehicle of the two. 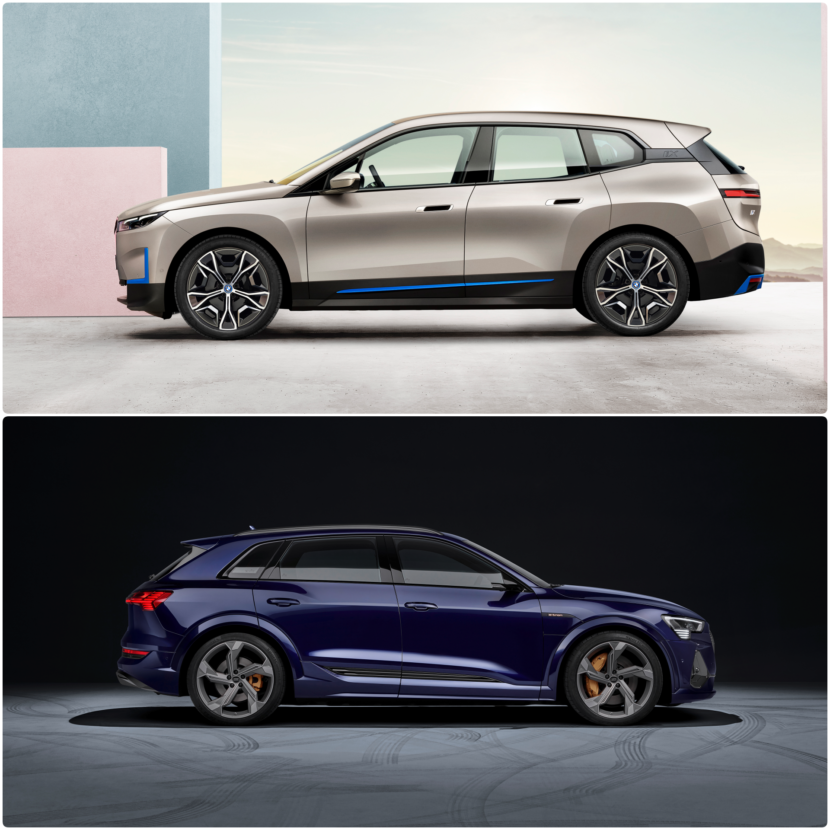 The new BMW iX comes with some really attractive surfaces and shapes that define its silhouette. The typical BMW i proportions are evolved into a new dimension, whereas the intricately designed Aerodynamic Wheels are definitely a complete eye-catcher. The Audi e-tron is also offered with optional rear-view, whereas the BMW iX is the more traditional and sticks to the classic mirrors, which appear as an evolution of the current widespread design.

While the e-tron looks more balanced in all aspects, the new iX clearly wants to create a statement. The impression that you first get when looking at the Bimmer from the back is that the rear end is simply huge. Two thin stripes with inner L-shaped LEDs are the new tail lights, while the boot gate opens across the entire rear area. The e-tron looks clean and uncluttered, in typical Audi fashion, yet it feels less sporty and more elegant than the iX. 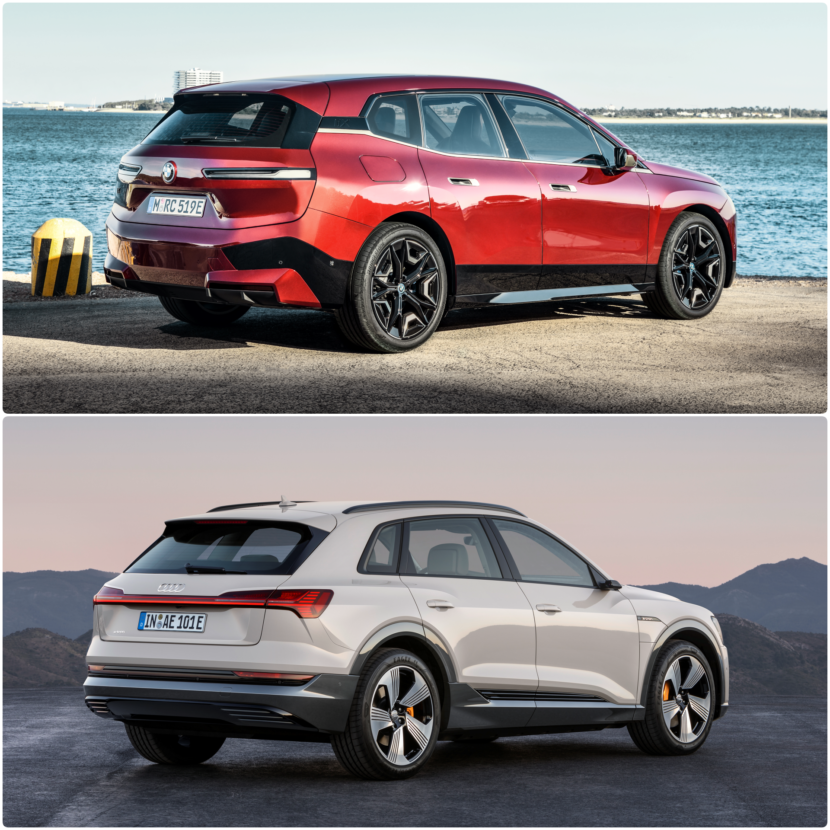 In terms of exterior paint colors, the iX seems to look better in darker shades, just as this special Aventurine Red metallic. The e-tron manages to create a good impression in both light and dark paintworks.

Going inside, the different philosophies become even more noticeable. The Audi proposes a classic design blending in a galore of touchscreens and displays, whereas the iX proposes a dashboard stripped down to bare essentials. 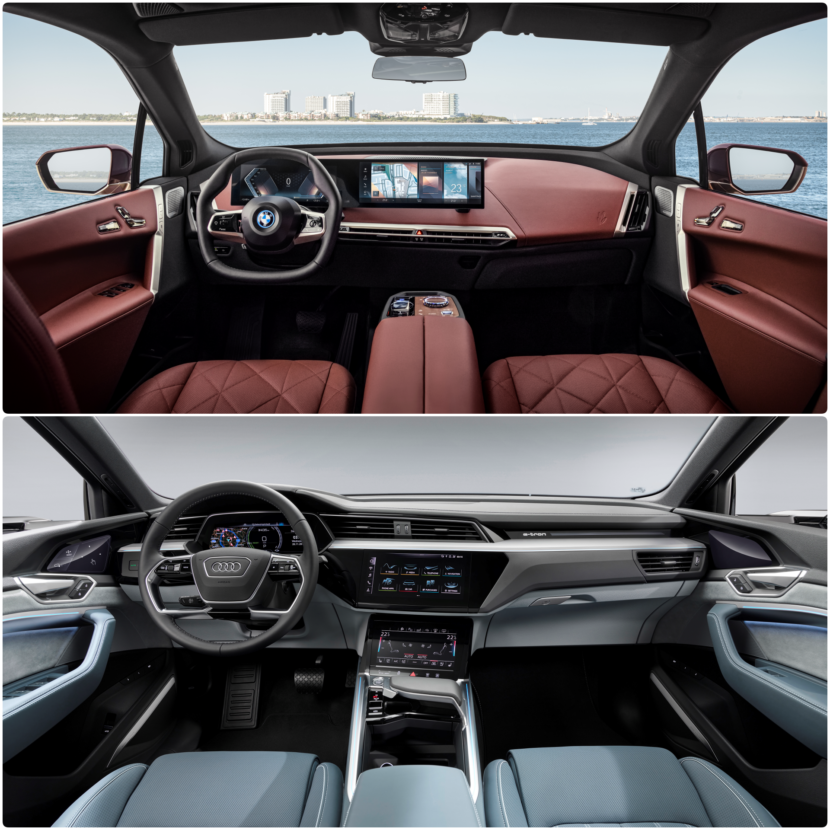 It is obvious that BMW is the breakthrough model here, with its minimalistic approach for the passenger shuttle. There are few to almost no physical controls. The Touch Controller for the new BMW infotainment system comes with glass appearance, just like the new rocker switch for gear selection. Last, but not least, the touch-sensitive open-pore wood surface on the front armrest is simply trailblazing.

So, in the end, my situation looks as follows:

Of course, it’s sort of a narrow miss for Audi, or a narrow win for BMW. Anyway, both are splendid cars oozing of refined tech and revolutionary in their own way, and in the end it is just a matter of personal taste if you are Team iX or Team e-tron.