The E-Tron SUVs are nice and all, but the E-Tron model we’re most anxious to see is the new GT. Originally unveiled as a concept in November 2018 at the Los Angeles Auto Show, the electric sports sedan finally has a debut date – February 9, 2021. The major announcement was made today by the Four Rings as part of an interview with the company’s design boss, Marc Lichte.

We also get to see a reflection of the E-Tron GT’s rear end, further confirming it will remain visually faithful to the concept car before it. When the showcar debuted in LA, Lichte said it was the most beautiful car designed by him, and now, he claims the Porsche Taycan’s sister model will be a design icon for Audi. 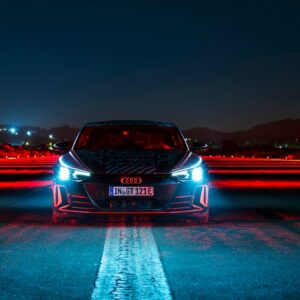 The E-Tron GT is important not only for being the first Audi electric sedan, but also the first RS model to eschew the combustion engine. Yes, a full-blown RS variant developed by Audi Sport has already been officially confirmed and will have up to 637 horsepower from dual motors enabling an AWD layout. The range-topping variant is getting a lithium-ion 83.7-kWh battery pack, rear-wheel steering, air suspension, torque-vectoring rear end, and a two-speed rear transmission.

It goes without saying the E-Tron GT lineup will effectively mirror that of its sister car, the Porsche Taycan. Expect the Audi to be more affordable than the equivalent from Zuffenhausen, which recently gained a new entry-level model with a single-motor, rear-wheel-drive setup priced just under $80,000. The flagship RS is unlikely to match the sportiness of the Taycan Turbo S, but that’s the point of the Audi model as it must not overlap with its Porsche counterpart. 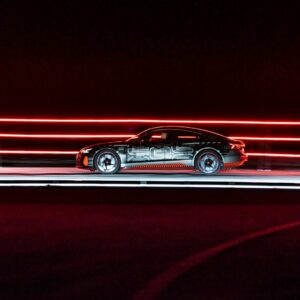 You’ll be surprised to hear Audi has already kicked off series production of the E-Tron GT well before the official premiere. In fact, the electric gran tourer hit the assembly line in December 2020 at the Neckarsulm factory where it’s built alongside the naturally aspirated R8 supercar. The German premium brand will begin accepting orders this spring, with customer deliveries kicking off later this year.

There’s a rumor from Auto Bild suggesting a wagon version is planned, presumably molded after the Porsche Taycan Cross Turismo coming later this year. It would be interesting to see an E-Tron Avant as a viable alternative to the company’s crop of electric SUVs, but nothing is official at this point.