To give us a bit of a taste of what the MINI Electric GP will be like, the British brand has just made an FIA Formula E Safety Car out of one and it’s called the MINI Electric Pacesetter. One look at the Pacesetter and it’s clear that the JCW GP was the basis for its styling. It gets similar fender blades, albeit painted rather than exposed carbon fiber, it has similar wheels, just in a different color scheme, and it has the same roof spoiler, only with a massive light bar on top. The Pacesetter wears a very cool electric-looking livery, with the MINI Electric plug logo on its roof, and the LED lights in the hood “scoop” are very slick. I actually think this looks cooler than the JCW GP. 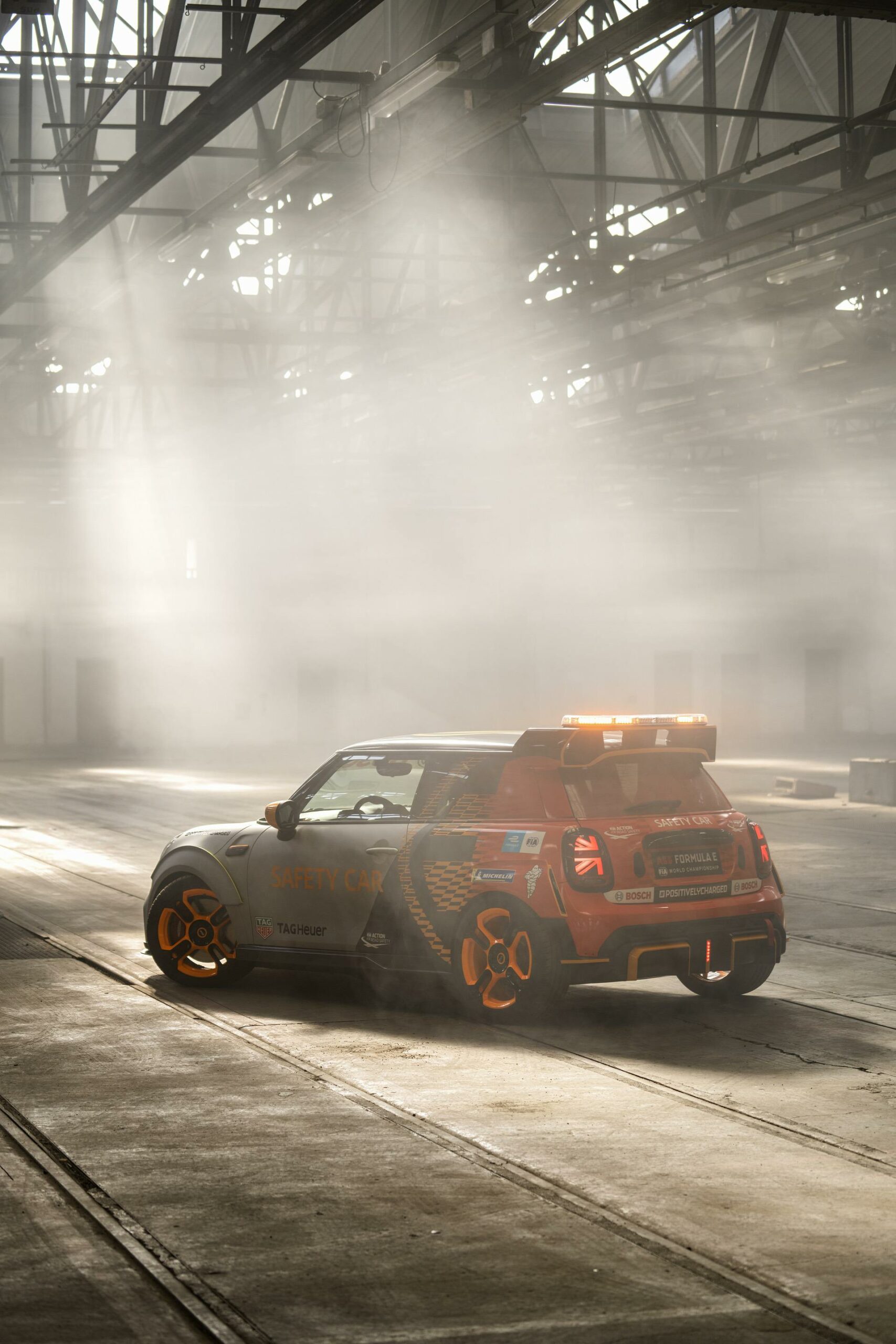 All of the aero on the exterior, including the fender blades and rear wing, is also made from 3D-printed, recycled carbon fiber, which not only makes them very light but also quite green. Which is fitting for an electric pace car.

Things get even weirder inside, though. Everything seems to be exposed carbon fiber, including the steering wheel and center console. It ditches the typical infotainment system for a carbon fiber circle that reads “Be Safe, Stay Healthy”. There’s a roll cage in the rear, which is obviously function, rather than the red “brace” in the back of the MINI JCW GP, which is purely aesthetic. Like the JCW GP, though, the MINI Electric Pacesetter has no back seats. Naturally.

However, the most interesting aspect of the interior is its seat design. The racing buckets, complete with four-point harnesses, are also made from rigid carbon fiber but feature 3D-printed removable cushions, which has a semi-organic looking composition.

Due to the lightweight measures taken to turn the MINI Cooper SE into the MINI Electric Pacesetter, the latter weighs about 130 kg (286 lbs) less than the former. So while it uses the same powertrain as the standard electric MINI, it’s quicker to 60 mph, doing the deed in 6.7 seconds, versus 7.3 seconds for the standard car.

It does get some handling bits, though. Thanks to the three-way adjustable dampers, likely from the JCW GP, the new MINI Electric Pacesetter sits lower and will feature sharper dynamics. The suspension is manually-adjustable, so you can’t just flick a switch inside the cabin, but it’s three-way adjustable; height, damper, and rebound. What’s interesting is that camber is also adjustable, if you’d like. It gets a 10mm wider wheel track than the standard MINI Cooper SE, four-piston brakes, and Michelin Pilot Sport tires. 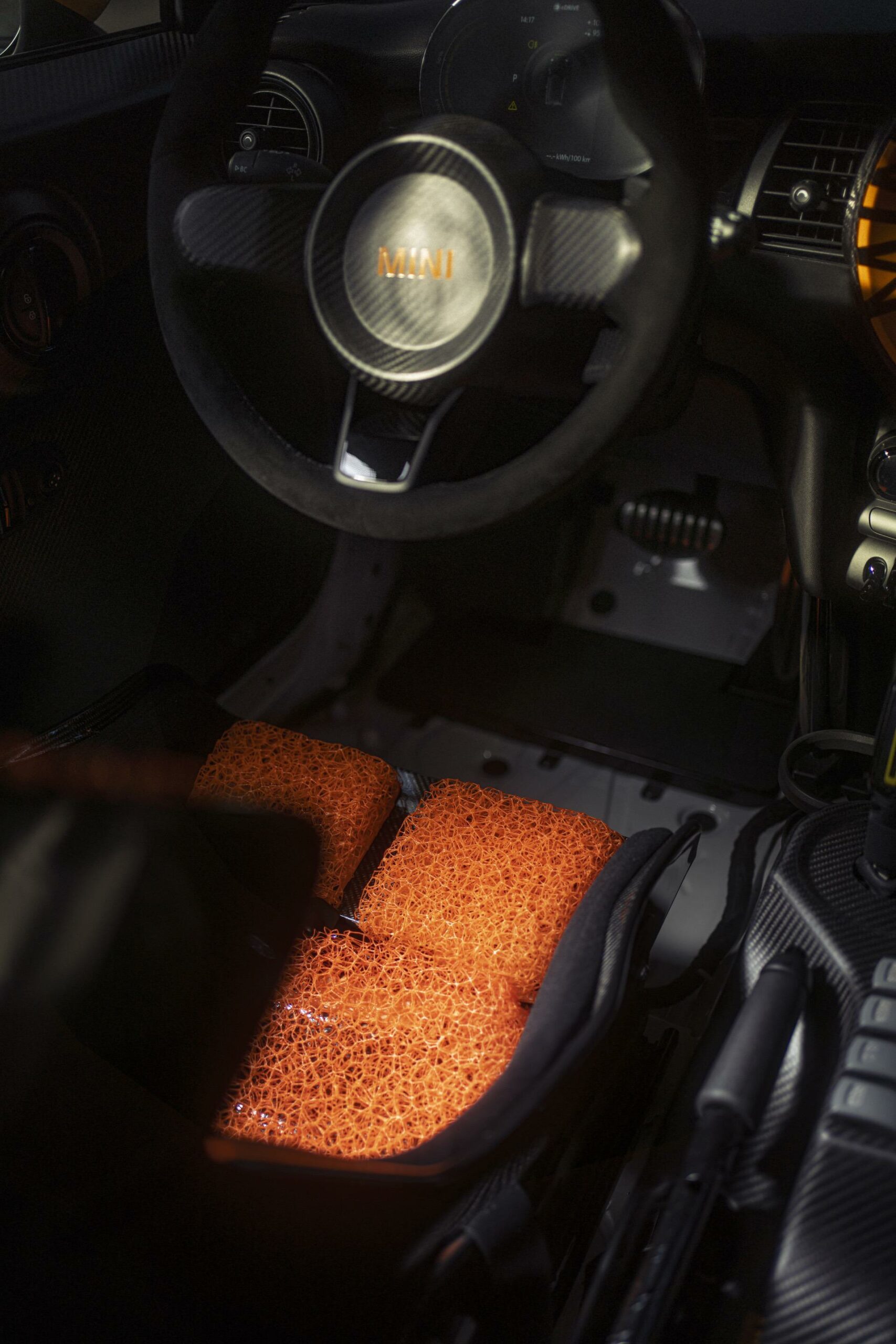 If you want to see the MINI Electric Pacesetter in live action, stay tuned on April, 10, when it will make its inaugural run at the Rome E-Prix. We really like this car and we hope it’s a signal of what’s to come from the MINI brand. If MINI puts out something similar to this on the road, count me in.

Previous articleWill BMW build a 3 Series electric sedan but with the i3 name?
Next articleVolkswagen allegedly gives its U.S. business a new name: Voltswagen